An orange banner is hung for the opening of the new Scientology church on the corners of Griswold and Jefferson in downtown Detroit, Monday.(Photo: Clarence Tabb Jr., The Detroit News)Buy Photo

The Church of Scientology began operations Monday at its new downtown Detroit location.

Church staff arrived Monday morning to its newest center in Metro Detroit, located on Jefferson at Griswold in the former Standard Savings Building.

Their arrival comes a day after the church held a private grand opening and dedication ceremony at the 55,000-square-foot building. Church officials said more than 2,000 parishioners attended Sunday's event.

On Monday, church members and staff dressed in business attire entered the building through a brightly-lit lobby with marble floors and brass fixtures.

Upon entering the lobby doors, visitors will see a reception desk and shelves with copies of Hubbard's Scientology books to the left. A flat-screen television airing the Scientology Network TV channel is to the right.

The church's new location also symbolizes “not a revolt, not a wish to change any Man’s religion, but the hope that man can find his own feet in this highly confused and mechanistic world," David Miscavige, the ecclesiastical leader of the Scientology religion, said during Sunday's ceremony. "And if he can do so, then perhaps he can also recover the happiness, sincerity, love and kindness with which he was created.”

A plaque at the front entrance invites visitors in for a tour. (Photo: Clarence Tabb Jr., The Detroit News)

Scientology was founded by American author and humanitarian L. Ron Hubbard. Its first church was formed in 1954 in Los Angeles. The religion has more than 11,000 churches, missions and affiliated groups across 167 nations.

The church bought the building more than a decade ago and spent an estimated $8 million renovating it amid plans to relocate from its Farmington Hills location.

The new location features a Public Information Center that presents an introduction to the religion and Dianetics, the set of beliefs Hubbard created about the relationship between the body and mind.

The center's displays also contain more than 500 films in 17 languages, share the beliefs and practices of the Scientology religion and Hubbard's life. It also has information on the humanitarian initiatives supported by the church.

The organization, which counts actors John Travolta and Tom Cruise as members, has also acquired more than 70 buildings since 2004 in major areas. 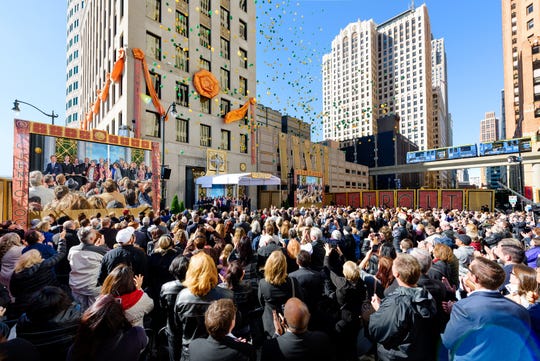 A private opening for 2,000 Scientology parishioners and guests was held Sunday in front of the building. (Photo: scientologynews.org) 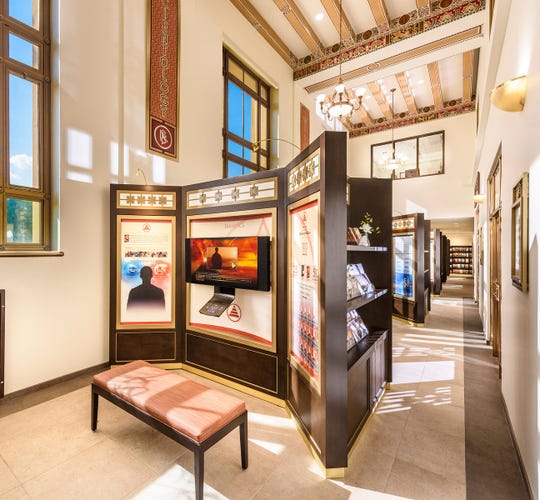 Inside, the Scientology Public Information Center offers more than 500 films on the beliefs and practices of the religion, as well as humanitarian initiatives and community outreach programs the church supports. (Photo: scientologynews.org)