Attorney Mike Morse participates in handing out backpacks to Pulaski Elementary-Middle School students in this Tuesday, Sept. 6, 2016 file photo. Morse will not face criminal charges for a incident in which a woman accused him of improperly touching her at a Farmington Hills restaurant.(Photo: Jose Juarez)

Federal court records describe a scheme involving a stream of police reports flowing to Morse and his Southfield law firm from bribed police officers and a middleman using the alias "Lou."

The allegations, aired in a civil lawsuit filed by State Farm, provide new details about the scheme's inner workings. State Farm leveled the allegations Oct. 17, five days after a lawyer said the FBI and a federal grand jury are investigating a bribery conspiracy involving Morse's firm.

“Let’s do the police report thing," Morse is accused of writing in an email to rehabilitation center owner Jayson Rosett, 50, of Bloomfield Hills, who used the alias "Lou." "Just get them to me and I will get you more active treating patients. It will work."

An email between lawyer Mike Morse and rehabilitation center owner Jayson Rosett, who is expected to be charged with a crime in federal court next month. (Photo: U.S. District Court)

Morse, 51, has done "nothing wrong," his lawyer I.W. Winsten wrote in an email to The News.

"Numerous courts have confirmed State Farm’s long and sad history of engaging in bad conduct to try to stop lawyers like Mike Morse from continuing to successfully represent accident victims against them," Winsten wrote. "This is what State Farm does, and this is what they are trying to do here. It will not work. State Farm has not sued Mike Morse or his law firm because it knows he has done nothing wrong.  There is no evidence that Morse knew his law office was given police reports that were improperly obtained by others. None."

The link involving unnamed Detroit Police personnel emerged six months after a Detroit police sergeant was suspended amid an FBI investigation into allegations she sold information in traffic crash reports to a third party.

The unnamed third party used the stolen material to contact drivers and passengers, convince them to obtain unnecessary legal and medical services, and file lawsuits, according to two Detroit police memos obtained by The Detroit News.

Rosett, the rehab center owner,and his father, Robert Rosett, 76, of Bloomfield Hills, are targets of the criminal investigation, according to letters by federal prosecutors that were filed in a lawsuit brought by State Farm against Jayson Rosett and 17 others. 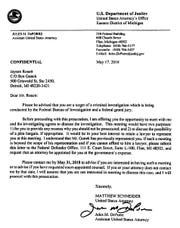 The Justice Department notified Bloomfield Hills rehab center owner Jayson Rosett that he was a target of a federal criminal investigation in May. (Photo: U.S. District Court)

State Farm is trying to force one of Morse's employees  to provide information about the alleged conspiracy.

"...defendants, Morse and those working for him ... knew they were not permitted to have or use the non-public reports they used to solicit individuals, but used them anyway so that they would have a competitive advantage over other firms and providers," State Farm lawyer Kathy Josephson wrote in the court filing last week.

The conspiracy started in 2010 and involved Jayson Rosett allegedly bribing Detroit police officers for accident reports before they were publicly available to law enforcement, insurers and lawyers, according to State Farm and court records.

"Initially, Rosett would personally call auto accident victims using the alias 'Lou' and then email the victims’ information" to the Morse employee, according to State Farm's lawyer.

The employee would  "then call the accident victims to solicit them for Morse," Josephson added.

In exchange for soliciting clients for Morse, the employee instructed chiropractors who treated Morse's clients to refer them to Jayson Rosett's physical therapy clinics, according to State Farm.

Morse is a well-known figure due to his firm’s ubiquitous television commercials and roadside billboards throughout Metro Detroit.

“They need a regular flow of clients so they’re going to beat the bushes to try and make connections with people,” Henning said. “Even though it sounds like ‘give our firm a call,’ that really isn’t how it works. They need to get their name out in front of people, whether that’s a policeman or EMT, who can tell people in an accident ‘here’s someone you can call.’”

Two years later, in mid-2012, Rosett and others started planning to use a limited-liability company, the Accident Information Bureau, to solicit clients for Morse, and patients for rehabilitation centers, according to State Farm.

Without identifying the company, Jayson Rosett's lawyer Ben Gonek wrote in an earlier court filing that money used to bribe police officers was "laundered" through an entity created by the Bloomfield Hills entrepreneur and others.

The civil lawsuit filed by State Farm two years ago alleges Morse "played a critical role in facilitating the success of the (defendants’) fraud scheme and received substantial financial benefits from the fraudulent claims generated by the clinics...," the insurance company's lawyer wrote in an earlier court filing.

The financial benefits included $550,000 to buy property for an addition on Morse's house and $100,000 to an entity that owns Morse’s private jet, according to the civil lawsuit.

State Farm wants U.S. District Judge Avern Cohn to force Morse's employee to comply with a subpoena seeking documents relating to the police reports and payments. The employee is fighting the subpoena.

"Given Morse’s apparent role in the scheme and the significant evidence of a quid pro quo referral arrangement between his firm and defendants’ clinics — designed to enrich themselves rather than benefit any patient/client — the requested documents into these matters are clearly relevant," State Farm's lawyer wrote.