Testimony begins in the trial of former trooper Mark Bessner, who's charged with two felonies in the death of 15-year-old ATV rider Damon Grimes 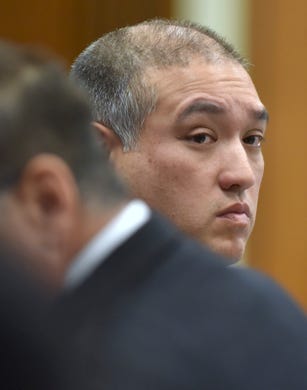 Defendant Mark Bessner turns around before the jury enters the courtroom in his second-degree murder trial, Tuesday, Oct. 23, 2018, in Wayne County Circuit Court. The retired Michigan State Police trooper allegedly shot Damon Grimes with a Taser when the teenager refused to pull over for police while riding his ATV in Detroit. Grimes ran into a pickup, suffering fatal injuries. Todd McInturf, The Detroit News
Fullscreen

Assistant prosecutor Matthew Penney acts like he's pulling the trigger of a Taser while facing the jury during his opening statement. Todd McInturf, The Detroit News
Fullscreen 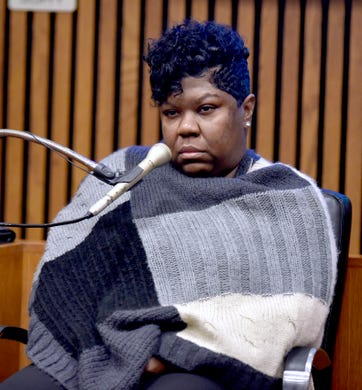 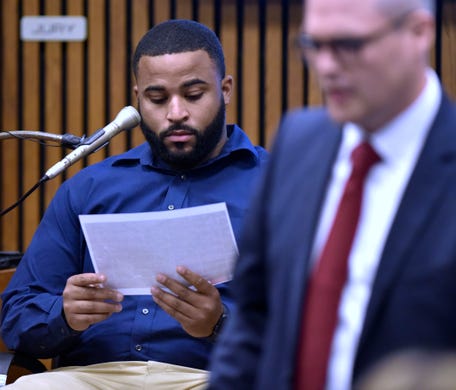 The third witness, Detroit Police Officer Jalen Williams, looks at a map of the Gratiot and Rossini Drive deadly crash area, behind assistant prosecutor Matthew Penney. Williams and his partner responded to the accident. Todd McInturf, The Detroit News
Fullscreen 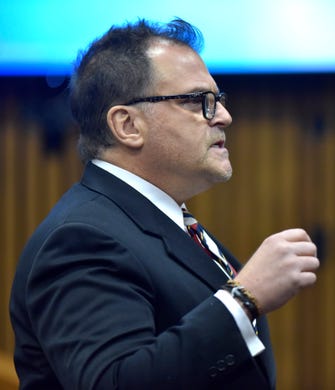 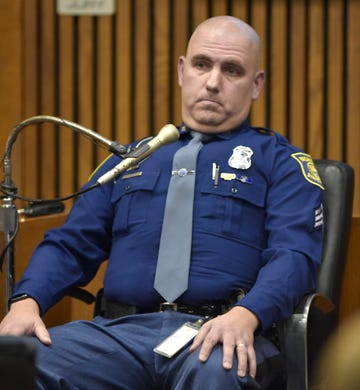 Second witness MSP Sgt. Roger Hunt testifies to the authenticity of the in-car police video that is introduced as evidence. Todd McInturf, The Detroit News
Fullscreen 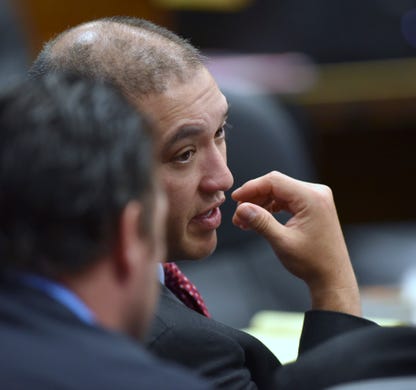 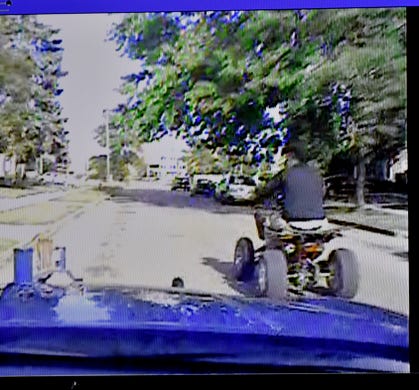 Michigan State Police troopers pull up next to teenager Damon Grimes on his ATV, as seen on this in-car video during the trial. This is seconds before Bessner allegedly deploys his Taser at Grimes. Todd McInturf, The Detroit News
Fullscreen 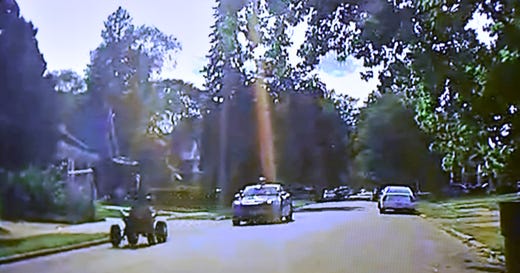 ATV rider Damon Grimes is seen on a DPD in-car camera as he eludes the MSP scout car of defendant Mark Bessner and his partner before he is allegedly shot with a Taser by Bessner. Todd McInturf, The Detroit News
Fullscreen 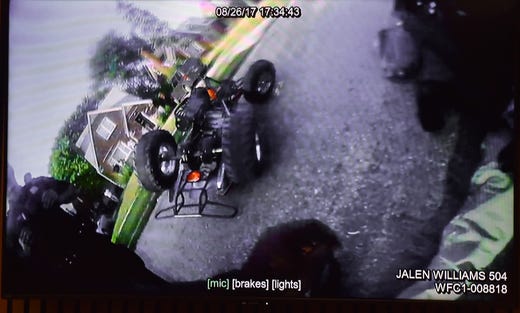 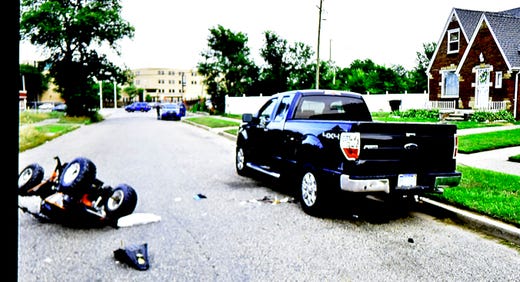 Damon Grimes' crashed ATV lies beside the pickup he ran into in this image presented as evidence. Todd McInturf, The Detroit News
Fullscreen 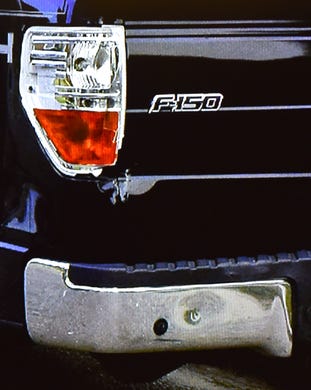 Prosecutors say the dent in the middle of this bumper is a result of the ATV crash of Damon Grimes. Todd McInturf, The Detroit News
Fullscreen 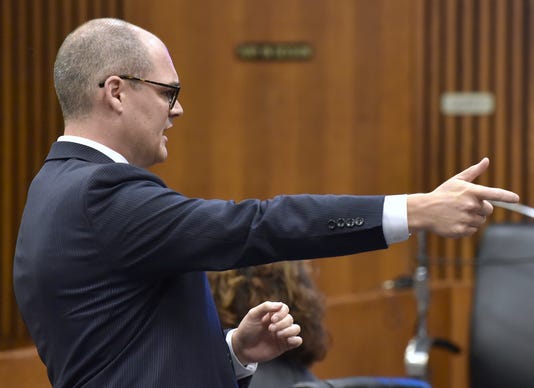 Assistant prosecutor Matthew Penney acts like he's pulling the trigger of a Taser while facing the jury during his opening statement.(Photo: Todd McInturf, The Detroit News)Buy Photo

Former Michigan State Police trooper Mark Bessner did not use reasonable force when he deployed his Taser at a teenaged ATV rider who subsequently crashed into a truck and died, a prosecutor said Tuesday as testimony began in Bessner's trial for second-degree murder and involuntary manslaughter in Wayne County Circuit Court.

The Aug. 26, 2017, crash in the area of Gratiot Avenue and Rossini Street killed 15-year-old Damon Grimes.

"The defendant chose to take out a device designed to instantly render someone helpless and fire it at a 15-year-old boy," Assistant Wayne County Prosecutor Matthew Penney told jurors and Judge Margaret Van Houten. "If you distract someone going that fast … something bad is going to happen ... someone is going to die."

Penney said although Grimes was guilty of a nuisance violation, Bessner could have handled things differently that August afternoon.

Penney said probes from the Taser were found in the teen's back and in his hair.

"He slowed down. He crashed. ... I Tased him," Penney quoted Bessner as telling dispatch the day of the crash.

Bessner's lead defense attorney, Richard Convertino, told jurors in his opening statement that his client did not know Grimes was "a boy." He said Bessner believed Grimes, who Convertino described as 6-feet 1-inch tall and more than 230 pounds, was older.

Convertino said Bessner felt threatened by Grimes as the teen allegedly rode near the state police car in which Bessner was a passenger, with one hand on the handlebar of the ATV and one hand in a downward fashion. 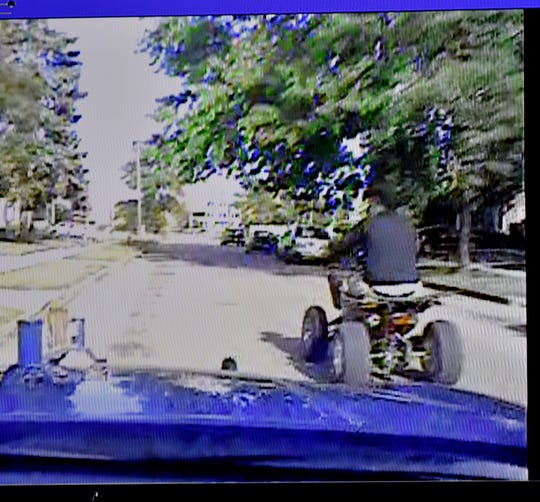 MSP troopers pull up next to teenager Damon Grimes as he rides his ATV as seen on this in-car video during court. This is seconds before Michigan State Police trooper Mark Bessner allegedly deploys his taser at Grimes. (Photo: Todd McInturf, The Detroit News)

"In a split second, he thought that young man was armed," Convertino said.

Detroit Police Officer Jalen Williams and John Harris, a resident on Rossini, both testified that they did not see Grimes' hands leave the handlebars of the ATV.

Harris testified Tuesday that he told another MSP officer who arrived at the scene that he thought Bessner and his partner hadn't done "anything wrong" but he also admitted that he could not see what was happening on the passenger side of the car, where Bessner was riding.

Williams, who is stationed at Detroit Police's 9th precinct, was on patrol with his partner when they saw Grimes drive past them on the ATV. The Detroit witnessed the horrific crash that claimed Grimes' life. The incident was captured on video from the officers' scout car and body camera.

The graphic video showing Grimes' motionless body on the street just after he hit a black Ford F-150 pickup, gripped the courtroom and sent the teen's mother, Monique Grimes, running from the courtroom in tears.

Called as the prosecution's first witness, Monique Grimes described how a friend of her son came to her home to tell her the teen had been in an accident.

Monique Grimes said she was told when she arrived at a nearby hospital that her son had died. She said she identified his body on a screen at the Wayne County Medical Examiner's Office.

The second witness called, Michigan State Police investigator Roger Hunt, was questioned about the in-car video taken from the MSP vehicle Bessner rode in that day with his partner.

In the video, law enforcement officers are heard responding to the crash after Grimes drove into the truck in the area of Gratiot and Rossini, with officers saying the teen had a "faint pulse."

Convertino said while the incident was an "unmitigated tragedy," Bessner and his partner "did not know what they had." The defense attorney said the troopers' squad car was approached by a man who was acting aggressively and that Grimes blew a stop sign while riding the ATV.

Van Houten's courtroom was packed with family members for both Bessner and Grimes.

The prosecution has 40 potential witnesses to call in the trial.Five were called to the witness stand Tuesday.