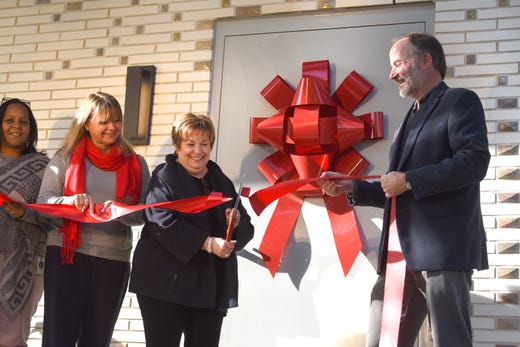 From left, Karl Williamson and Alison Watson watch Maxine Frankel cut the ribbon with Steve McBride, executive director of Pewabic Pottery, during a ceremony on Thursday October 25, 2018 for the Maxine and Stuart Frankel Pewabic Tile Studio. The 2,500 square-foot addition is the first expansion since 1912. Max Ortiz, The Detroit News
Fullscreen 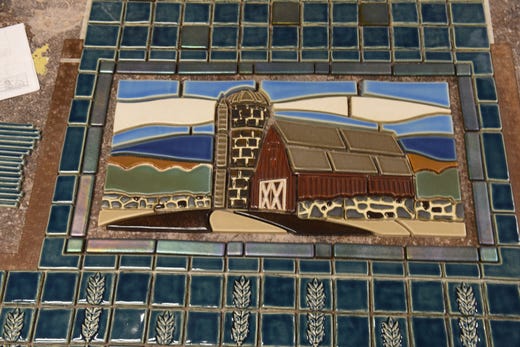 One of the many projects made at Pewabic Pottery in Detroit.. Max Ortiz, The Detroit News
Fullscreen 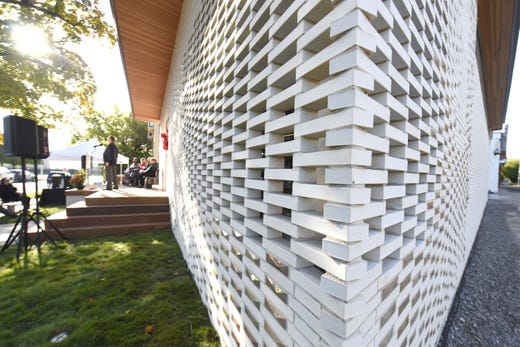 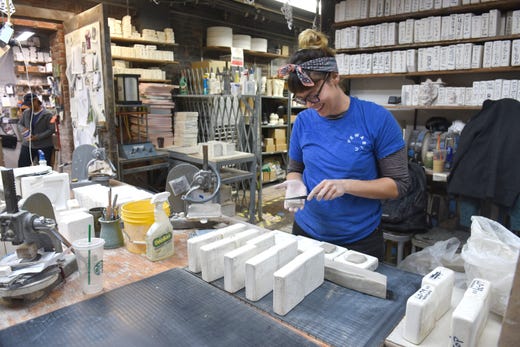 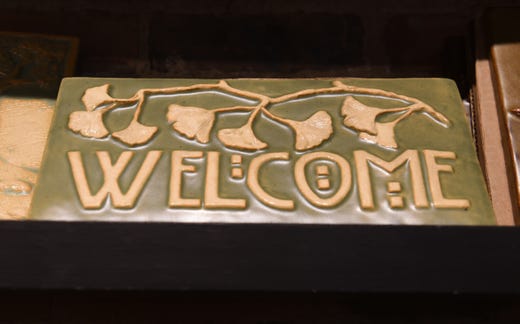 A welcome sign made at Pewabic Pottery. Max Ortiz, The Detroit News
Fullscreen 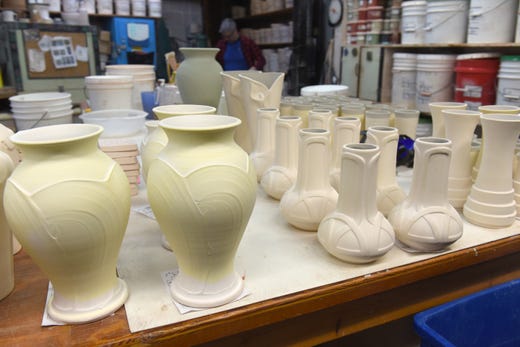 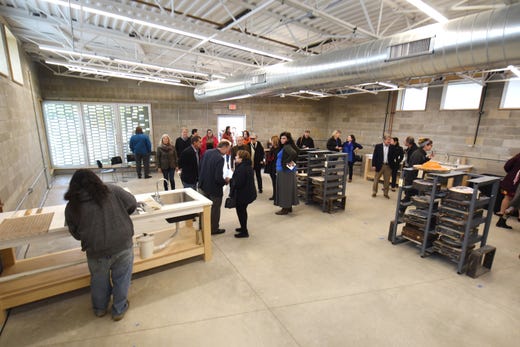 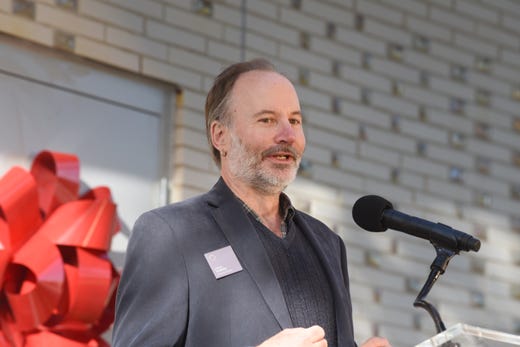 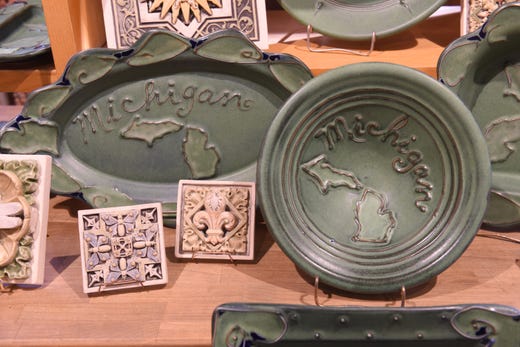 Pottery bowls and platters displayed in the entry gallery at Pewabic Pottery in Detroit. Max Ortiz, The Detroit News
Fullscreen 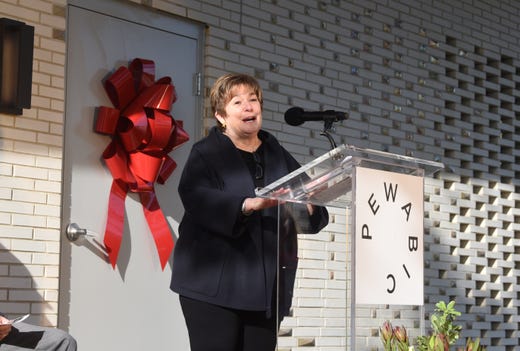 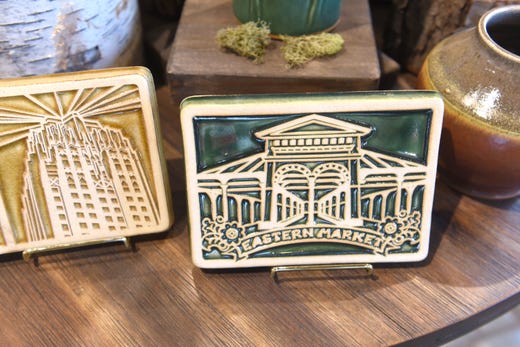 A tile dedicated to historic Eastern Market is made at Pewabic Pottery . Max Ortiz, The Detroit News
Fullscreen 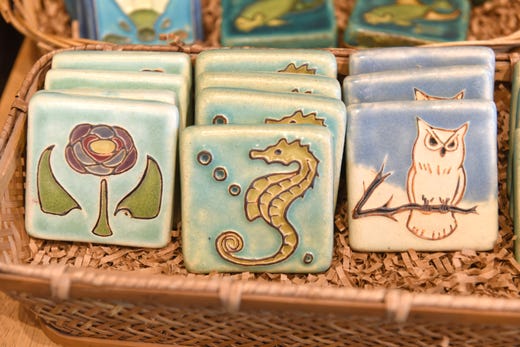 Unique and whimsical tiles made at Pewabic Pottery in Detroit. Max Ortiz, The Detroit News
Fullscreen 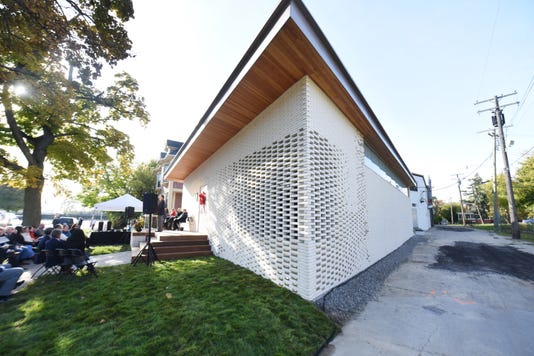 A ribbon-cutting ceremony was held Thursday for the Maxine and Stuart Frankel Pewabic Tile Studio, a 2,500 square-foot addition to the pottery.(Photo: Max Ortiz, The Detroit News)Buy Photo

An earlier version of this story should have Pewabic Pottery was founded in 1903.

In another sign of new life percolating through the city, Detroit's Pewabic Pottery cut the ribbon Thursday on its first addition since 1912.

Designed by inFORM Studios in Northville, the one-story, discreet modernist structure fronts on Hurlbut, and attaches to the English arts-and-crafts house that's been the pottery's home for 111 years.

"Everyone who does ceramics knows its a space-intensive activity," Pewabic Executive Director Steve McBride said at the ceremony outside the white-brick addition. "Production space is always the No. 1 priority."

The studio, which includes a new Blaauw custom-made tile drier from the Netherlands within and some of the pottery's famous iridescent tile without, will allow for increased production and cut turnaround time on architectural orders.

"This is just the start," McBride promised. "We're doing master planning for our campus right now," he added, with ambitions for a café, education studio and sculpture garden.

"But it's significant that we’re starting with the studio," he added, "since crafting tile is the heart and soul of Pewabic."

Project funders include the Maxine and Stuart Frankel Foundation for Art, the Michigan Council for Arts and Cultural Affairs, the William Davidson Foundation, the Erb Family Foundation, as well as a host of individuals.

Maxine Frankel called the morning "a truly proud moment for Stuart and me as native Detroiters." The Frankels, whose philanthropy extends all across the Metro area, have a world-renowned collection of contemporary ceramics.

"The thing that excites me most as a businessperson," said Rachel Lutz, owner of The Peacock Room stores in the Fisher Building and the Park Shelton Apartments, "is the expansion of capacity, which positions Pewabic to be more competitive in the world of commercial architecture."

Lutz also is a new Pewabic board member.

Pewabic Pottery was founded in 1904 by Mary Chase Perry Stratton in an old stable in the city's Brush Park historic district. The National Historic Landmark structure it currently inhabits was designed in 1907 by William B. Stratton, the man who would shortly thereafter marry the pottery's founder.