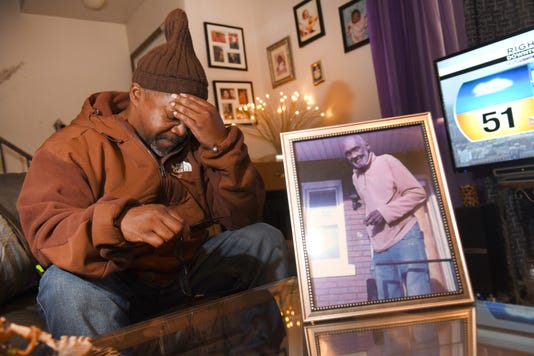 Maurice Wise gets emotional as he talks about his uncle Lorance Wise, whose photo is displayed in his home. Maurice Wise had his uncle cremated in 2013 at Cantrell Funeral Home and was told that his ashes were interred at the Great Lakes National Cemetery in Holly.(Photo: Max Ortiz, The Detroit News)Buy Photo

Detroit — Days before the five year anniversary of his uncle's death, Maurice Wise said he was devastated to find out the U.S. Army veteran never made it to his final resting place.

Wise was at an eye doctors appointment on Monday when he answered a call from Verheyden Funeral Homes saying his uncle, Lorance Wise's, cremated remains were at a state mortuary facility in Flint.

"We paid to have him cremated and sent to the Great Lakes National Cemetery in Holly so that he could be with his army buddies... that's all he ever wanted," said Wise, of Detroit. "They called and I was so confused, I said 'which uncle?' and my heart dropped in the lobby of the doctor's office and everyone saw me lose it."

Lorance Wise, who died on Oct. 28, 2013, was among the cremated remains of 269 people found by state inspectors at Cantrell Funeral Home in Detroit and have been held during their investigation.

The remains, which included 26 veterans and 53 people who have yet to be identified, were loaded into six caskets and transported with a police escort to Verheyden Funeral Home in Grosse Pointe Park on Thursday.

Verheyden owner Brian Joseph on Thursday hand-delivered Wise the remains of the uncle who he considers one of his guardian angels. The box is wrapped in a black suede pouch on Wise's living room table, beside his uncle's photos, candles, his favorite wine bottles and a pack of cigarettes.

Wise said he no longer trusts any funeral home to care for his uncle and wants to take him to the cemetery himself.

"I don’t trust them at all, none of them. I’m sure there’s some real credible ones out there, but to go through what I just went through… I never will. I’m always going to feel this way," Wise said. "For it to almost have been five years to the day, this is painful. It's like we're burying him all over again."

Wise was the caregiver for his uncle and father. Wise said his uncle died of natural causes, alone in the family's Detroit home, while Wise had been out of town in Louisiana.

Wise then contracted Cantrell Funeral Home, near his grandmother's home on Mack Avenue and paid $1,000 to have his uncle cremated and sent to the veteran's cemetery, he said.

"The director called me a week later telling me ‘he was sent, gone already,' and asked if I wanted an American flag in his honor. I said no, as long as he’s where he wants to be, I’m fine," Wise said. "Then come this past Monday, Verheyden called saying they had his remains in Flint. I saw it all over the news that they raided Cantrell in April and recently, but thought I had nothing to worry about, that he passed years ago, we paid in full and that the director guaranteed me he made it to the cemetery.

"My dad was sick with cancer and died the next year. We buried him with a different funeral home...," he said.

The hundreds of plastic boxes and a handful of porcelain urns had sat abandoned at the former funeral home on Detroit's east side for years and were confiscated by the state in April, when the funeral home was shut down. 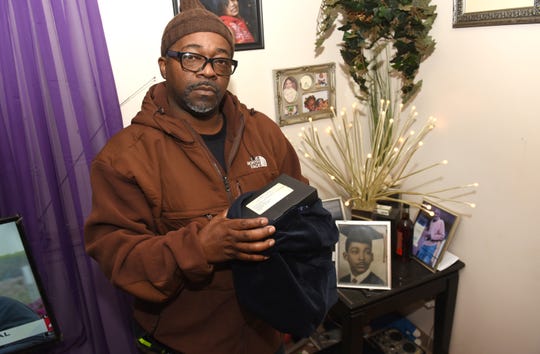 Maurice Wise holds the remains of his uncle Lorance Wise which he received in his Detroit home on Friday, October 26, 2018. (Photo: Max Ortiz, The Detroit News)

Along with the 269 cremated remains, investigators found two embalmed bodies left in caskets in the garage since the end of 2017. A third body also was found, held by Cantrell from January to April while families paid for the services, and "more than 20 bodies awaiting final disposition," were covered in mold, the state Department of Licensing and Regulatory Affairs said.

Officials found a box of fetal remains on Aug. 29. An anonymous letter led them to the remains of 11 infants on Oct. 12.

It's unclear why the remains were left at the funeral home, some for as long as two decades and others as early as January.

"His body has been with the state since April and they are just now contacting me?" Wise said. "He's a veteran who never got to his final resting place... it's six months later.  I wouldn't wish this feeling on anyone."

Jason Moon, a spokesman for LARA, said following LARA's suspension order of Cantrell in April, remains found on the site awaiting burial or delivery to a customer were surrendered to Preferred Removal Services, Inc., a facility with refrigeration equipment and storage. Not all remains were easily identifiable, he added.

"There are a variety of reasons families are being contacted now versus in April including the ongoing investigation, attempts to identify the unlabeled cremated remains, and securing a partnership with a funeral establishment able to manage the inquiries and distribution," Moon said in an email. "We thank Verheyden Funeral Home for working with us and connecting families with the remains of their loved ones.”

Joseph said the funeral home launched an effort to find next of kin who may want to retrieve the remains or attend funeral services. The funeral home has fielded hundreds of inquiries, he said. He called the response overwhelming.

"I cannot impress upon you the amount of phone calls, emails, coming in off the hook," Joseph said. "We contacted 200 families ... and so many of those phone numbers were disconnected, we couldn't find them, and now it's like, here they come. Thank goodness."

The funeral home plans to have a service on Nov. 2, All Souls' Day, for 230 of the cremated remains at Mount Olivet Cemetery in Detroit.

The remains will be placed in a crypt in a mausoleum. Officials have not decided how the crypt will be identified, said Michael Chilcote, COO of Mount Elliott Cemetery Association.

"We have a design on how to put multiple cremated remains in one space and memorialize them as well," Chilcote said. "We aren't burying them because (if) some of these families do come forward in the future, we want to be able to retrieve them."

Wise will join others on Nov. 12, Veteran's Day, at Great Lakes National Cemetery in Holly. Each will be given their own hearse from the Grosse Pointe Park funeral home, and a procession will be escorted by Michigan State Police along Interstate 75. The remains will be laid to rest with military honors, Joseph said.