Man, 24, killed while passing out fliers for nonprofit group

Man, 24, killed while passing out fliers for nonprofit group 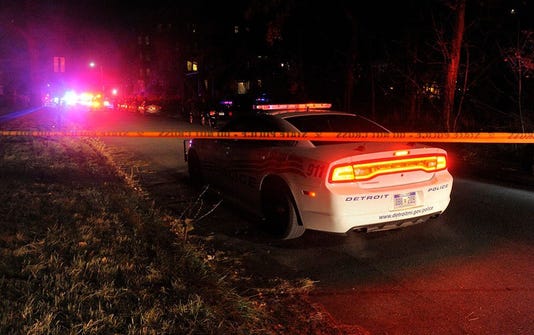 A 24-year-old man was killed and his 19-year-old female companion was wounded Tuesday when a gunman opened fire on them as they passed out fliers for a nonprofit organization, police said.(Photo: .)

Detroit — A 24-year-old man was killed and his 19-year-old female companion was wounded Tuesday when a gunman opened fire on them as they passed out fliers for a nonprofit organization, police said.

The incident happened at about 6:50 p.m. in the 6000 block of Drexel Street on the city's east side, said Detroit police Officer Vanessa Burt. Investigators believe the shooter targeted the male victim, she said.

"They were passing out fliers in the neighborhood when an unknown suspect wearing a gray hoodie came out from between two houses firing shots," Burt said.

The man died from his injuries, while the woman's was listed in stable condition, Burt said.

Although the victims were distributing fliers encouraging people to vote, police don't believe that played a part in the violence, Burt said.

"The shooting had nothing to do with them passing out fliers," Burt said. "The victim didn't feel comfortable in the area because he had a beef with someone in that area.

"We don't believe this was random," Burt said. "We believe the victim was targeted because of the earlier beef he had."

The gunman was last seen running away on Hern Street, Burt said. She described him as a black male between 5'6 and 5'8.

Good Jobs Now, the group with which the two victims were associated, held a press conference Wednesday on the shooting.

"I’ve been working as an organizer since 2008, and have sent many canvassers out on doors in that time. Those people become family members, and our worst fear is always that one of them might not come back," Snyder said. "Last night that worst fear came true as two members of the Good Jobs Now family were shot while going door to door encouraging their community to vote and take ownership of our democracy."

According to Detroit police online data, the killing was the 214th homicide in the city this year. In 2017, there were 307 homicides year-to-date, police data shows.

Anyone with information about the incident is asked to call the Detroit Police Homicide Section at (313) 596-2260.