Attorneys for the plaintiffs say more than 200 infant and fetal remains were possibly mishandled.

Rachel Brown and Larry Davis speak emotionally about the mishandling of their daughter Alayah Davis' remains. The Detroit News 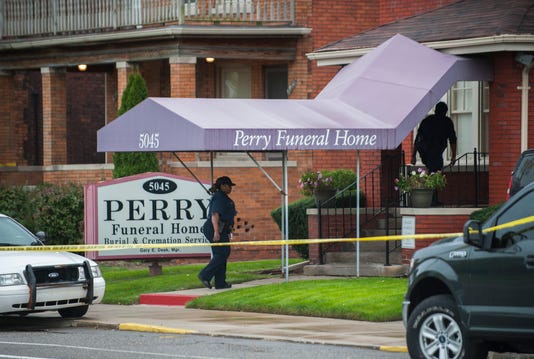 A Wayne County judge granted class-action status Monday to a lawsuit filed by a woman who alleges Perry Funeral Home, Harper-Hutzel Hospital and others mishandled her daughter's remains, with her attorneys claiming the bodies of "well over 200" fetuses and babies could have met similar fates.

Attorneys for Rachel Brown in July sued the funeral home, the hospital, Wayne State University and Knollwood Park Cemetery in Canton Township, alleging the remains of her daughter, Alayah Davis, were not handled properly after Brown requested the baby's body be donated to the Wayne State medical school for research.

Brown's attorneys Peter Parks and Daniel Cieslak on Monday told Judge Sheila Ann Gibson of Wayne County Circuit Court that more than 200 remains of infants and fetuses may have been mishandled by the defendants, based on entries in the Wayne State Mortuary Science log book.

The attorneys also alleged during Monday's hour-long hearing that Perry employees filed false death certificates indicating they'd buried Alayah and other infants and fetuses in Knollwood Park Cemetery. At least two sets of remains that Perry claimed to have buried turned up in a box on Oct. 19, when Detroit police and state officials raided Perry's facility on Trumbull Avenue, Parks told the judge.

A source familiar with the investigation told The Detroit News the remains of Alayah Davis and Rasheed Noble, whose parents are also represented by Parks and Cieslak — and who also had a death certificate filed by Perry indicating she'd been buried in Knollwood Park — were among the 63 fetuses found in an unrefrigerated box during the raid.

After Monday's hearing, Brown said: "Justice will prevail. And I'm glad that not only can I represent other women ... (hopefully) everybody else's child will get the same justice as mine."

Attorneys for Wayne State and Knollwood Park were not present during Monday's hearing. Wayne State spokesman Matt Lockwood said the school's part of the lawsuit was transferred to the Michigan Court of Claims, "so we're not part of the class-action lawsuit," he said.

Attorneys for Perry and the Detroit Medical Center/Harper-Hutzel Hospital insisted there are too many variables with the different sets of remains involved in the case to justify a class action, and that not all of the parents involved likely suffered emotional distress.

DMC attorney Carlos Escora argued Monday: "They've not provided the evidence that anyone suffered actual injury. The plaintiff is asking the court to assume the 200 (remains) in the Wayne State mortuary (morgue), and the 63 fetuses (removed from Perry by police during the Oct. 19 raid) all suffered actual injury.

"There are 263 individuals who have 263 different circumstances," Escora said. "Not all of them are likely to have suffered the same injury."

The judge said she would deal with that issue when it comes up.

Parks said HIPAA laws prevent him and Cieslak from obtaining records without parental permission that could show there are "well over 200 babies and fetuses similarly situated," which is why he said he wanted the court to name Brown as a representative in the class-action suit.

"Appointment of Rachel Brown as a class representative will allow us access to crucial information that will allow these families to find out what happened to their babies," Parks said. "One subclass will complain how the hospital handled the remains. A second subclass could be babies who had false death certificates filed. What's unique about Rachel Brown is, she fits all categories."

On April 30, 2015, Harper-Hutzel's Chief Medical Officer Patricia Wilkerson-Uddyback sent a letter to Perry saying the parents of 37 fetuses and dead infants had abandoned them at the hospital.

"We have called and left messages, as well as sending Certified Letters in an attempt to have the Parents come in and sign off on the Final Dispositions," the letter said. "Unfortunately, no responses were received."

Parks said during Monday's hearing that Wilkerson-Uddyback was unable to provide proof during an April 18 deposition that the hospital had sent out the certified letters or made phone calls to the parents.

DMC attorney Josh Arnkoff told the judge Brown's lawsuit shouldn't be given class-action status because "none of the elements for a class action are met."

"The plaintiffs all came from the April 30, 2015, letter to Perry," Arnkoff said. "There are already differences among those 37 remains; there are live births and stillbirth; and even within those there are differences."

Arnkoff said some of the parents of those 37 infants and fetuses didn't ask for the remains to be returned to them, which he said means "their rights (to proper disposition) were waived. And of the 63 (fetuses and babies police removed from Perry), we don't know how many were abandoned."

The judge said: "It's a known fact that 63 remains were found improperly kept at Perry," to which Arnkoff replied, "no, it's an allegation that they were improperly stored."

Brown, along with other clients of Parks and Cieslak, insist they thought their children's remains were going to the Wayne State medical school for research.

"It's just hurtful to say that we ... just tossed our babies away," Brown said. "That was never the case. It was to help other women not experience the pain ... to find out what's wrong with these children and ... prevent it from happening again."

Parks and Cieslak said they deduced at least 200 infant and fetal remains are involved because of entries in the logbook at the Wayne State mortuary science school morgue, which had an agreement with Perry going back more than 50 years allowing the funeral home to store remains there. The agreement was terminated last year.

"There were a number of entries that said 'fetuses,' and that's all it said," Parks said. "Several others listed '48 fetuses,' '37 fetuses' and 'eight fetuses.' But when it just said 'fetuses,' it didn't say how many."

Some of the log book entries contained names of the fetuses and their death dates, while others were marked simply "fetus" or "fetuses" with no number or any other information provided. Parks said if the plural entries of 'fetuses' contained only two sets of remains, the number of infants and fetuses involved is more than 200.

"It's troubling when they say 'fetuses,' but they don't say how many," Parks said.

"We were able to identify all those remains while they were in our facility," he said.

"I don’t know why (entries weren't made in the log book), but we could have identified any one of those individual remains while they were in our facility," Evely said. "A log book is not required by law. The funeral home fills out the log when they bring in remains and when they take them out."