Mayor's staff calls claims by Robert Carmack 'silly': 'Mayor lives at the Manoogian and has since he took office' 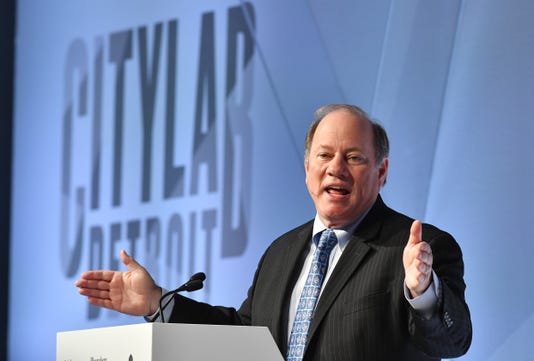 Detroit — A businessman who broadcast Mayor Mike Duggan's comings and goings on a video billboard last week has filed a lawsuit alleging that the mayor doesn't live in the city.

Robert Carmack, an auto shop owner who is locked in a legal battle with the city, filed a lawsuit Monday in Wayne County Circuit Court, claiming that the city has denied him his request for security tapes at the Manoogian Mansion and is attempting to overcharge him to obtain the footage sought through a Freedom of Information request.

According to the lawsuit, Carmack claims the mayor "is intentionally providing false information with respect to the hours and days that the security cameras record at the Manoogian Mansion," citing that a private investigator whom he hired allegedly finding that Duggan does not live there full time.

The filing claims the city is "intentionally charging an exorbitant amount of money to produce the security videos in order to prevent the Plaintiff" from obtaining them.

The city has said providing the requested materials would cost about $41,609 to "produce just (a) 30-day cycle of all video security cameras within the Manoogian Mansion with a deposit of $20,000 due on or before November 5, 2018," the lawsuit said.

In October, an attorney from the city's Law Department sent Carmack a supplemental response to an August FOIA request about the security video at the mansion as well as information on the mayor's executive protection staff.

The Law Department letter noted if 30 days' worth of footage from 13 cameras was turned over, it would equate to approximately 3,200 hours of video and cost $20,749.

Carmack had the option to amend his FOIA, said Duggan's chief of staff Alexis Wiley.

"He still has the opportunity to amend his FOIA," she said. "He just never responded."

Wiley said in a statement Monday that talk of Duggan's residency is "silly."

"The mayor lives at the Manoogian and has since he took office," Wiley said.

In a phone interview with The Detroit News, Wiley later added: "If he has evidence that the mayor lives outside the city he needs to produce it."

The lawsuit doesn't say why Carmack believes Duggan doesn't live in the city. The city charter requires that elected officials be bona fide residents of the city and "must maintain their principal residence in the city of Detroit for one (1) year at the time of filing for office or appointment to office, and throughout their tenure in office."

Wiley said Carmack had requested video for 30 days from 13 cameras that record 24 hours a day. He was offered the opportunity to limit his Freedom of Information Act request to one camera at the entrance of the mansion to lower the cost, she said.

"If he was truly interested in the truth, he would have asked for the one relevant camera angle, which would clearly show the mayor living at the Manoogian Mansion," Wiley said.

Carmack's suit alleges he initially sought all security footage from January 2014 through August 2018 but the city said it was only recorded on a DVR in a 30-day video. His lawyers dispute the claim and want a judge to determine the city has the recordings.

"It is apparent that Mayor Mike Duggan and his hired guns are once again trying to keep the taxpayers of the City of Detroit in the dark. In attempt to keep his unethical conduct a secret, Mayor Duggan has once again violated Michigan's Freedom of Information Act by hiding information that the citizens of the City of Detroit have a right to see," attorney Andrew Paterson said Monday.

"Charging exorbitant fees to gain access to public information is just Mayor Duggan's way of preventing the truth from being revealed that he once again is not a lawful resident of the City of Detroit."

In this frame from secretly recorded video, Mayor Mike Duggan is shown leaving a meeting at Messiah Baptist Church in Detroit on June 11. It is one of the few frames that clearly identify the mayor.  (Photo: Video released by Robert Carmack)

The lawsuit comes after Carmack last week displayed footage of Duggan on a billboard truck outside City Hall. The footage was captured over a series of months by a private investigator hired by Carmack.

The video shows Duggan driving himself without his personal protection unit after work hours to a home in Novi, where he spends between a few minutes to a few hours on numerous occasions over the summer. A woman seen on the video is present at the home at least two different times.

The recordings were distributed to The Detroit News and other news organizations and prompted the mayor and his wife to defend their marriage.

"It speaks for itself," Carmack, said Thursday. "This shows the character that I feel that this mayor is."

Carmack, who owns a Detroit auto shop on Michigan Avenue, is a central figure in a federal bribery case against Detroit City Councilman Gabe Leland. The city sued Carmack in June on claims that he fraudulently sold 10 acres of industrial property he didn't own near the Detroit River in southwest Detroit and flipped the land for a $750,000 profit.

The businessman also filed his own suit this spring against Leland, claiming the councilman attempted to extort him.

Carmack wore a recording device during conversations with Leland in which the councilman allegedly agreed to accept $15,000 and free car repairs from Carmack in exchange for Leland's efforts to delay or prevent the sale of property.

Carmack said he hired the private investigator to "find out what Mike Duggan does at night," and added that he's attempting to have specific people, including Duggan, participate in depositions in that lawsuit.

Duggan and his wife, Lori Maher, released a statement Thursday after Carmack publicly displayed the surveillance footage of the mayor, saying the videos "failed to uncover a single misdeed in the management of the city."

Duggan, a former Wayne County prosecutor, moved to Detroit from Livonia in February 2012 before deciding to run for mayor.

He ultimately was forced to wage a write-in campaign in the 2013 primary after being tossed from the ballot when a judge ruled he'd violated City Charter residency requirements.