Detroit — A city auto shop owner who hired a private investigator to trail Detroit Mayor Mike Duggan and then publicly aired the footage claims he's living in fear after the mayor asked state authorities to investigate whether his actions amount to extortion.

Robert Carmack told reporters "I am afraid" during a Wednesday news conference he convened inside his Michigan Avenue business.

Carmack organized the gathering, complete with a spread of pastries, beverages and linen-covered tables, telling reporters that he intended to share new information that he's claimed would embarrass the mayor. Ultimately, he declined to do so and vowed instead it'll come at a later date.

"I have three kids to take care of. I'm a single father. When someone says they are going to send the state police on me, I'm afraid," said Carmack, explaining his decision to hold off on divulging additional footage that he contends he has in his possession.

Carmack spent about an hour Wednesday showing video clips from past City Council subcommittee and formal sessions tied to riverfront property that he'd intended to gain ownership of and redevelop.

Carmack, in a lawsuit, said he was first pursuing the land deal during former Mayor Kwame Kilpatrick's administration and claims ex-Kilpatrick aide Derrick Miller demanded a $50,000 payment to finalize an agreement for the Revere Copper & Brass property near Historic Fort Wayne. 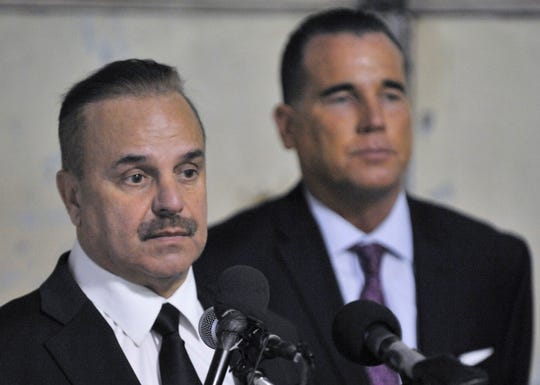 Carmack argued he invested hundreds of thousands of dollars into the effort that spanned close to a decade. But a few years ago, a deal was approved for a separate party, even though he still intended to follow through with a long-time proposal but "nobody helped me."

Carmack's media briefing came after Duggan held one of his own this week to announce he has asked state authorities to investigate threats made by Carmack in retaliation for city lawsuits.

The mayor contends Carmack has threatened to "embarrass me" after the city declined to drop a $1 million lawsuit it filed against him over a property Carmack had been seeking to buy from Detroit more than a decade ago.

"This is a terrible situation. I have to choose between protecting the interests of the city or protecting my family," the mayor told reporters Monday at City Hall.

“It's hard to tell why he called a press conference to show mostly old city council sessions," Roach said in a text message to The Detroit News. "There really was nothing new he said that's worth commenting on.”

On June 20, 2007, Detroit's City Council approved the sale but Carmack, Duggan said, failed to complete payment and sign the documents. As a result, the land has been in city ownership ever since.

A lawsuit filed by the city contends that Carmack in 2016 took the old draft documents from 2007 and used them to fraudulently represent that he did own the property.

He then sold the property to an out-of-state investor and pocketed $1 million, the city contends in its June lawsuit against Carmack.

Days later, Carmack's private investigators "began following my every move, looking for embarrassing information to use against me," the mayor said Monday.

On Wednesday, Carmack said the deeds were mistakenly sent to him for the property, which is located on Melville Avenue. He didn't sign the deeds, but Carmack said he did ultimately sell it.

"Guess what? I didn't want that property. I wanted the riverfront property," he said.