The mixed-income Lafayette West development will feature 374 residential units for rent and for sale. 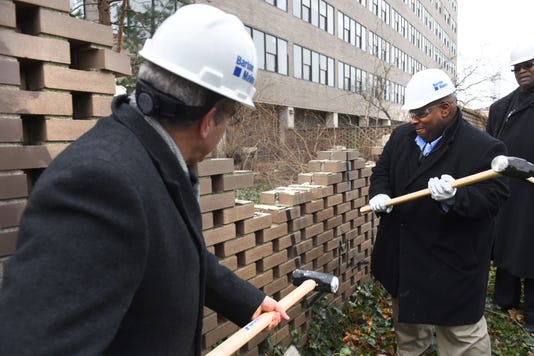 Amin Irving, president and CEO of Ginosko Development Co., center, uses a sledgehammer to a wall at the Lafayette West development on Thursday.(Photo: Max Ortiz, The Detroit News)Buy Photo

Detroit — Officials celebrated Thursday with a ceremonial sledgehammering as part of the start of demolition that will make way for the $108 million, mixed-income Lafayette West development in the city's Lafayette Park.

"We're about to embark on a journey that has been quite exciting," said Amin Irving, president and CEO of Ginosko Development Co. during a ceremony at the Horatio Williams Foundation, which is next door to the site between Interstate 375 and Rivard Street.

The 5.2-acre site will feature 374 residential units of both for-rent and for-sale lofts, flats, townhouses and high-rise units. The development will also include retail.

The first step is to demolish the 151,000-square-foot Shapero Hall, a former Wayne State University building that has been vacant for nearly 20 years. It once housed the university's College of Pharmacy and Health Sciences.

A groundbreaking is expected in early 2019 and work is expected to be complete by the end of 2020.

On Thursday, Irving took a sledgehammer to a brick wall on the site. Also joining in the short demolition exercise were city officials and residents involved in the planning process.

Matt Morin, a nearly 18-year resident of Lafayette Park, said he'll be relieved when Shapero Hall is demolished. The building has been empty since about a year after he moved into the neighborhood. At one point, it was a windowless eyesore.

"When that's gone and we have a nice new building with great amenities, it's only going to help us from that standpoint," Morin said. "More than anything, it's going to look so much better. It's going to be great."

Shapero Hall moved off and on of the city's demolish list as a previous owner, Dennis Kefallinos, had plans he later abandoned to turn the building into an apartment building. Windows were installed but renovations stopped. 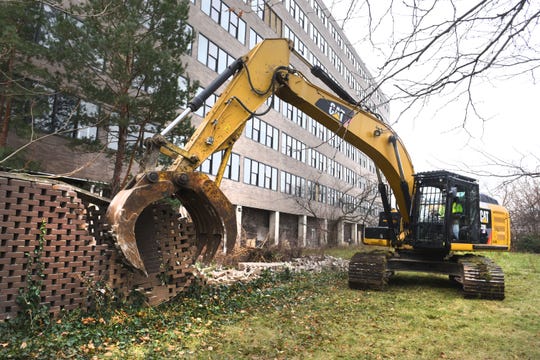 Irving said he drove by the abandoned property for years assuming someone had plans for the site. In late summer of 2017, he found out that was not the case.

"You drive by long enough, and you say what's really going on," he said. "When I started digging, I started to understand there really is an opportunity here."

Irving's opportunity resulted in Lafayette West. The development will have both market-rate and affordable housing.

“It’s a place for everyone,” said Arthur Jemison, Detroit’s chief of services and infrastructure.

Jemison said he met Irving about four and a half years ago and likes his approach to affordable housing.

Because the development exceeds $75 million, it is subject to Detroit's Community Benefits Ordinance. Several meetings were held with residents to develop a community benefits agreement.

Morin was a part of the neighborhood advisory committee. He said that developers took into account concerns of the residents. They asked for no full street closures, reduced debris and construction noise and for work to take place within limited work hours. 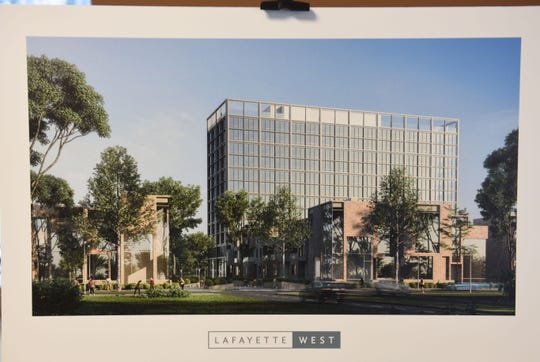 "While we had disagreements, I think it was a collaboration process," Morin said. "It's ended with a project on a path that's different than when it started and it acknowledges the concerns of the neighborhood."