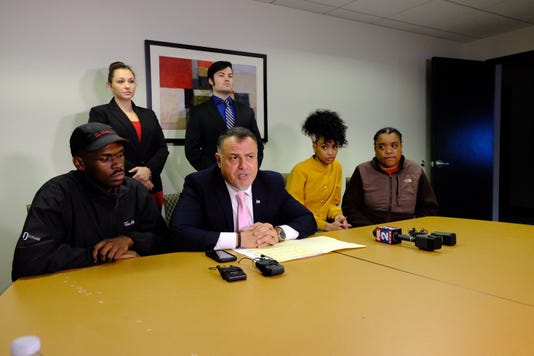 The three workers are being represented by attorney Nabih Ayad of Ayad Law.(Photo: Sarah Rahal, The Detroit News)Buy Photo

The employees worked together at a restaurant on Ford Road and Wyoming. They were transferred this year to a Tim Hortons on Ford Road and Beech Daly, where they said they faced "outrageous misconduct."

The three met with their attorneys for a news conference on Tuesday at Ayad Law in downtown Detroit, saying they would file a federal lawsuit against Tim Hortons if company leaders are not willing to immediately address the issues and make changes to their policy, they said.

Francis Martin and Sharneisha Martin were fired on Oct. 24 and Nov. 14, respectively. About the same time, Munningham said he was taken off the schedule. A few weeks later, he was told that he would be transferred to a new location, he said.

Munningham, 20, alleges that a white female manager, who started at the restaurant five months ago, calls him racial slurs on a daily basis.

"Whenever she needs something lifted or brought down, she'll be like, 'Come, let me use your (n-word) strength or your (n-word) height'," Munningham of Detroit, said at the press conference. "When she first got there, she wasn't manager at the time but was entitled, and bossed me around when I'm the supervisor. She started calling me 'black boy.' We got into it and she told me to get out of her store."

Workers said their white counterparts are allowed to leave work early without punishment,are given the "easy jobs" and raises, can call in sick without question. They, however, have to show up to work to prove they are sick, they said Tuesday.

"That was the most degrading place that I have ever worked at, but I had to keep my job because of my family," said Francis Martin, 43, of Detroit.

Tim Hortons' corporate office responded to the allegations saying, "Harassment of any kind is unacceptable and everyone has the right to live and work in environments free from harassment".

The owners of the store locations were not immediately available for comment.

Francis Martin, 43, worked at Tim Hortons in Dearborn for 18 years before she was fired in November. She, her daughter and another worker filed a federal discrimination complaint for management’s use of racial slurs and being paid under minimum wage. @detroitnewspic.twitter.com/1OGIDwOaGR

Sharneisha Martin, 26, said she was fired in November when a customer called her an animal, and a verbal altercation occurred, management didn't defend her.

"When a customer called me an animal and the manager yelled at me, I said, 'It's OK for a customer to call me an animal? And she said yeah, because I'm black," Martin said. "It was a horrible experience."

Their attorney, Nabih Ayad, said he is asking for officials come forward to "make right what was wronged."

"We hope to change their discriminatory practices and make them respect our laws," Ayad said.