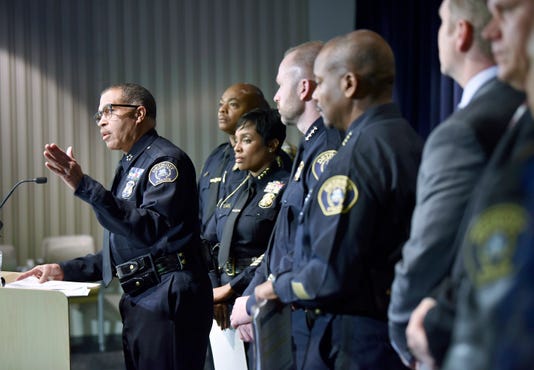 Detroit — Violent crime is down in the state's largest city, with the lowest number of homicides reported in 50 years, Detroit Police Chief James Craig said Wednesday.

Homicides, nonfatal shootings, property offenses, aggravated assault and gun violence in Detroit decreased in 2018, while police saw an uptick in rape statistics after changing how the allegations are classified, Craig said.

Violent offenses including homicides, rape, robbery, nonfatal shootings and aggravated assault, have decreased by 2 percent with a total of 13,474 reported in 2018.

Craig said during a press conference Wednesday at the city's Public Safety Headquarters that there were 261 criminal homicides in 2018. The total represents a 2 percent drop from the 267 homicides reported in 2017. The total from 2017 had marked the fewest number of homicides since 1966, when there were 214. In 2016, there were 305 homicides in Detroit. 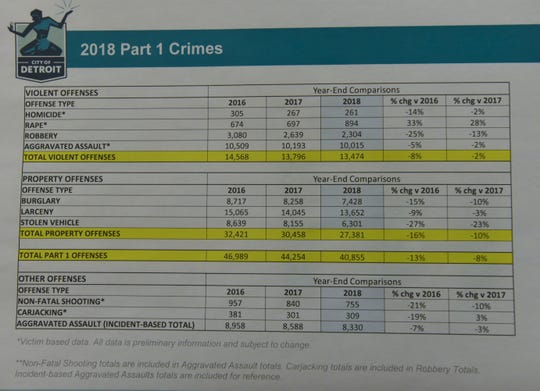 This is the first page of the City of Detroit 2018 Part 1 Crimes statistics. Detroit Chief of Police James Craig announces a 2% reduction in total-violent offenses from 2017 to 2018 during a press conference on crime statistics at DPD Public Safety Headquarters, Wednesday afternoon, January 2, 2019. (Photo: Todd McInturf, The Detroit News)

Detroit Police Chief James Craig says total violent offenses including homicides, rape, robbery, nonfatal shootings and aggravated assault, have decreased by two percent with a total of 13,474 reported in 2018 compared to 13,796 in 2017. @detroitnewspic.twitter.com/Jy7WJPaVVb

The city's homicide number is lowest on record in more than 50 years; in 1966, there were 214 homicides.

That, however, was at a time when Detroit had a population of more than 1.5 million people — a rate of about 14 homicides per 100,000 residents.

Although violent crime was down 2 percent, Craig said, rape cases jumped 28 percent in 2017 and 33 percent in the last five years. Craig attributed the increase to a change in how the department filed rape allegations.

Prior to Nov. 9, 2017, the department filed Law Enforcement Notifications, which they receive from school counselors, physicians and clergy members. The department, officials said, wouldn't classify allegations as rape cases until it ruled as such by investigators. The department has since changed its filing policy to classify every report as rape until officers determine it was not.

"By changing it, our numbers appear inflated," Craig said. "We did a comparison around the state to determine if other departments do it that way. What we found is some departments, when they get these law department notifications, some would put it in as a sexual assault and there were others that would not. There's no consistency across the state. We think this is the more efficient way of measuring sexual assaults."

The number of nonfatal shootings decreased by 10 percent in 2018, a 28 percent decrease compared to 2014.

Property offenses also decreased by 10 percent, with a total of 27,381 reports filed in 2018 including burglary, larceny and stolen vehicles. Property crimes have gone down 24 percent since 2014, when 36,226 were reported, officials said.

The city's Project Green Light began in January 2016 with high-quality video surveillance cameras at eight Detroit locations and has since exploded to include nearly 500, up from 232 at the end of 2017.

The project's cameras located at gas stations, liquor stores and other businesses are monitored by officers and civilians in the police department’s Real Time Crime Center.

In 2018, nearly five sites became Project Green Light Detroit partners each week. Those partners had a 6 percent decrease in violent crimes compared to 2017, according to the department. Craig said their goal is to add 200 more this year.

Craig attributed the decreases to their multiple partnerships with CeaseFire, Flip The Script, the state attorney general and Bureau of Alcohol, Tobacco, Firearms and Explosives as well as Mayor Mike Duggan's and Wayne County Executive Warren Evan's offices.

Matthew Schneider, U.S. attorney for the Eastern District of Michigan, said the federal government is proud to work with Detroit police every day.

"We have a long way to go, we are getting there, but things are improving in the city every day," Schneider said during the Wednesday news conference.

Special Agent James Deir of the Detroit Field Division of the Bureau of Alcohol, Tobacco, Firearms and Explosives said they are targeting "trigger-pullers" and will soon implement the National Integrated Ballistic Information Network, a "game-changer for the city that will connect the dots," he said.

"We are using every federal statute that we can to target trigger-pullers. The shooters matter," Deir said.

Mental illness also continues to be one of the greatest challenges to fighting violent crime, Craig said, as many do not receive necessary treatment.

Keith Bennett, director of Flip The Script, the state's largest prisoner division and re-entry program, said he's seen first-hand a change in the way many of his clients talk about the police. 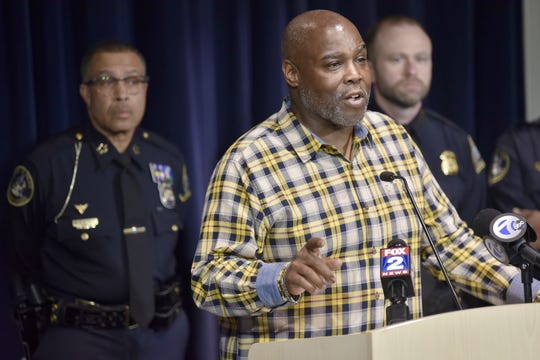 "I've been a resident of northwest (Detroit) for 60 years and have seen a transformation in how the police look at offenders," said Bennett, 64. "The more conversations that we've been able to stimulate before crime between the police department and these type of individuals, the more it's decreased the likelihood that they would commit crimes.

"They've changed the way they talk about their engagement with the police department, as opposed to the last 17 years," Bennett added. "They do not see the police as enemies now."

Craig said despite the successes, he continues to think about unsolved murders that occurred in 2018. Among those, Craig said, are a 30-year-old man shot during an altercation in the 14000 block of Corbett Avenue on Dec. 2, Two brothers shot and killed when they were ambushed outside a home in the 14000 block of Ashton Street in February, and an incident in September when a mother and her 5-year-old daughter were shot in their home of 19000 block of Lyndon.

"I know and realize it's cases like these that create fear in our city," Craig said. "That does not mean we're not headed in the right direction."