More than 1,000 gathered inside the Charles H. Wright Museum of African American History in Midtown Saturday. 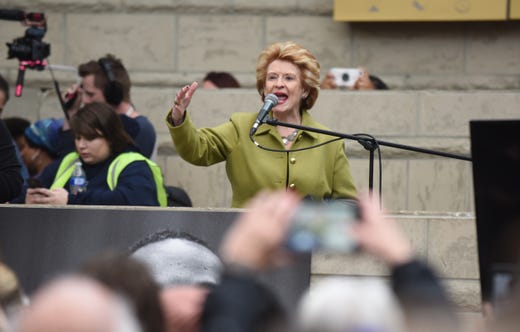 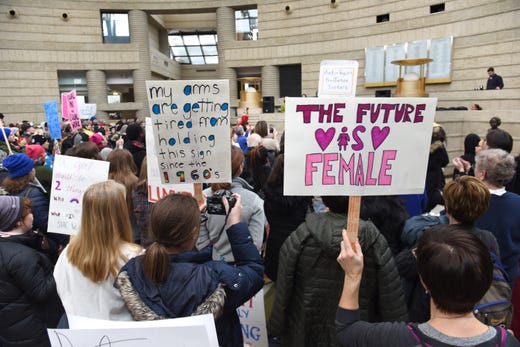 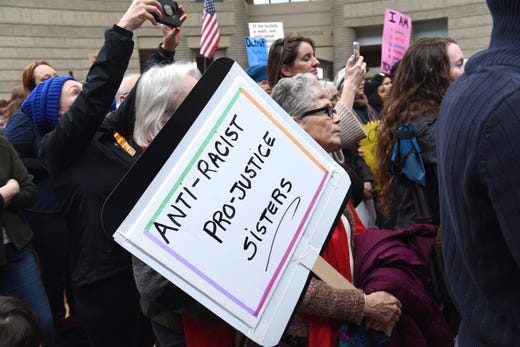 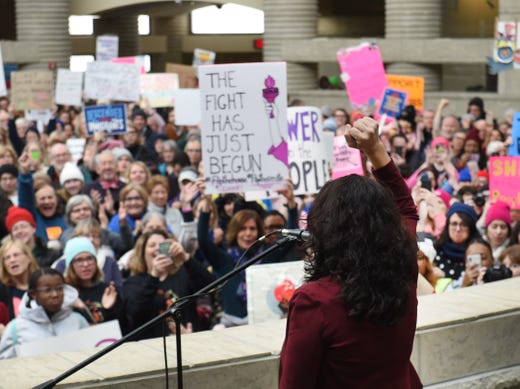 Congresswoman Rashida Tlaib raised her fist in solidarity as she spoke at the Charles Wright Museum of African American History for the Women's March Michigan. Max Ortiz, The Detroit News
Fullscreen 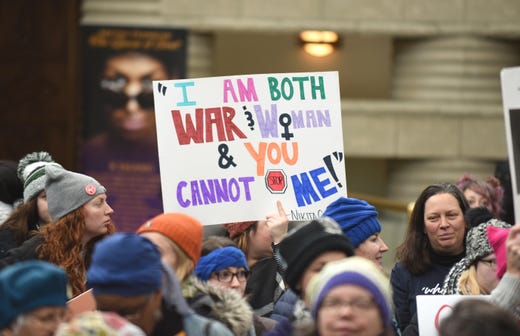 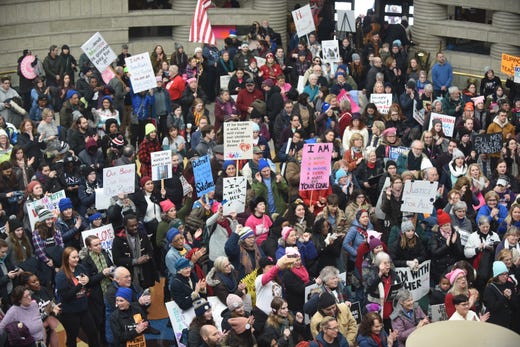 The rotunda at the Charles H. Wright Museum of African American History was filled with hundred for the Women's March Michigan on Saturday, January 19, 2019. Max Ortiz, The Detroit News
Fullscreen 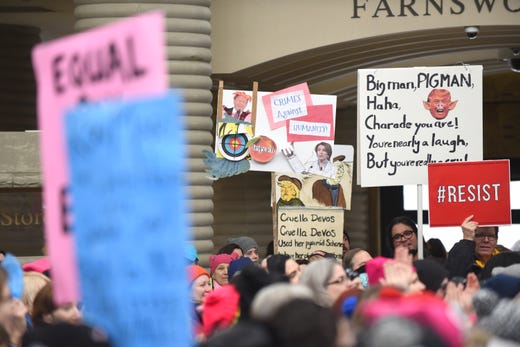 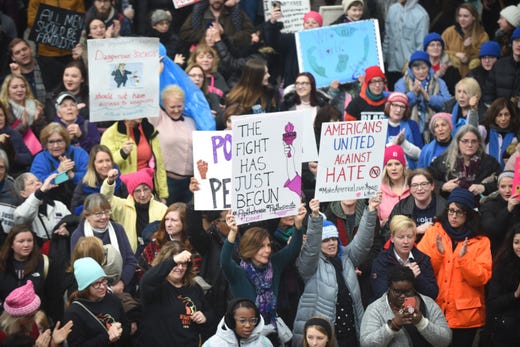 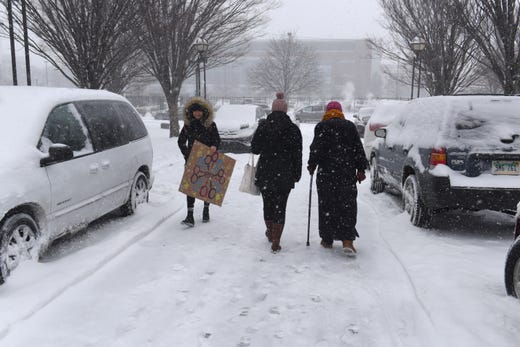 Detroit — A snow storm and dangerous driving conditions didn't stop Cheryl Jones and her mother from putting on their pink hats and rallying Saturday at the second anniversary of the Women's March.

"We came because we don't want to go back to the times of our great-grandparents," said Jones, 55, from Detroit. "Women have come so far, but this man (President Donald Trump) is messing up my liberty and my pursuit of happiness and it's spreading. The statue of liberty is laying down her torch and it's about to go out."

More than 1,000 protesters gathered inside the Charles H. Wright Museum of African American History in Midtown with signs reading "Resist," "Hands off my reproductive rights" and "Treat people with kindness."

"The Women’s March was very much in response of this sense of feeling oppressed as women in America," Tlaib told The Detroit News after she spoke. "Not only the feeling that we’re somehow less equal, but the sexualization of women from this administrations actions talking about the issue of choice, confirming a judge that sexually assaulted a woman, all of those things really resulted in the continuation of training our voices.

"What always helps is raising our voices… this is like fuel for the movement," she added. "This is fuel for the women who want to be next to their other sisters that feel the same way."

"We are women, we are strong and there are a 131 in the United State's Congress...It's the first diverse Congress we've ever had," Dingell told the crowd. "We will not let this country be divided by fear and hatred."

In Lansing, Gov. Gretchen Whitmer is scheduled to speak Sunday during a Women’s March rally at Michigan State University, where student organizers decided to proceed with the event despite concerns over allegations of anti-Semitism by leaders in the national movement.

Sexual assault awareness will be a key theme of the MSU event in the wake of the Larry Nassar scandal “and the treatment of sexual assault survivors by now former-President John Engler,” said Debbie Miszak, a 19-year-old sophomore and lead organizer for the march.

Engler resigned as the university interim president late Wednesday after a series of controversies, including the former governor's comment to The News' editorial board that Nassar victims were “enjoying” the spotlight.

The Women’s March returned to Washington on Saturday and found itself coping with an ideological split and an abbreviated route due to the government shutdown.

Randi Weingarten, president of the American Federation of Teachers, said members have marched every year and will continue to march and endorse the effort "because we believe in journeying for justice together, even when the road is bumpy."

“These marches were never about particular individuals. They were, and they remain, about all of us," Weingarten said in a statement issued Saturday.. "They are about caring, fighting and showing up for what’s right. And mostly, they are about the important work that happens in the days and weeks after to fight for a better country. That’s the work we focus on today, not a controversy meant to pit communities against each other."

Activists in some states and cities have cancelled women’s marches or formed alternatives following reports of controversial comments by two national leaders, including claims that Jews bear a “special collective responsibility” for exploiting people of color.

"We are standing together as women who are all the same," Detroit's Cheryl Jones said. "Black, white, Muslim, it doesn't matter. If they come for one of us, they come for all of us. We have to respect one another and it's OK to agree to disagree, but not to forget that women have fought for these rights for years."

The original march in 2017, the day after Trump’s inauguration, drew hundreds of thousands of people. The exact size of the turnout remains subject to a politically charged debate, but it’s generally regarded as the largest Washington protest since the Vietnam era.

Organizer this year submitted a permit application estimating that up to 500,000 people would participate in the D.C. march, but the actual turnout was expected to be far lower. Parallel marches were planned in dozens of U.S. cities.

The original plan called for participants to gather on the National Mall. But with the forecast calling for snow and freezing rain and the National Park Service no longer plowing the snow, organizers changed the march’s location and route to start at Freedom Plaza, a few blocks from the White House, and head down Pennsylvania Avenue past the Trump International Hotel.

This year’s march has been roiled by an intense ideological debate.

In November, Teresa Shook, one of the movement’s founders, accused the four main leaders of the national march organization of anti-Semitism. The accusation was leveled at two primary leaders: Linda Sarsour, a Palestinian-American who has criticized Israeli policy, and Tamika Mallory, who has maintained an association with Nation of Islam leader Louis Farrakhan.

Shook, a retired lawyer from Hawaii, has been credited with sparking the movement by creating a Facebook event that went viral and snowballed into the massive protest on Jan. 21, 2017. In a Facebook post, she claimed Sarsour and Mallory, along with fellow organizers Bob Bland and Carmen Perez, had “steered the Movement away from its true course” and called for all four to step down.

The four march organizers have denied the charge, but Sarsour has publicly expressed regret that they were not “faster and clearer in helping people understand our values.”

Despite pleas for unity, an alternate women’s march has sprung up in protest and planned a parallel rally in New York on Saturday a few blocks away from the official New York Women’s March protest.