In a case that's made national headlines, officers Gary Steele and Michael Garrison were suspended with pay Monday after Steele reportedly posted a video last week showing the events of a Jan. 29 traffic stop on Detroit's west side. Steele and his partner Garrison, who work in the 6th Precinct, are allegedly heard on the video mocking the woman they'd pulled over, Ariel Moore.

The officers stopped Moore near Joy Road and Stout and ticketed her for having an expired registration, police officials said. Her vehicle was ordered impounded.

After Moore declined the officers' offer to drive her to her nearby home, Steele videoed her as she walked away, saying "priceless" and "bye Felicia," according to the video, first aired by WXYZ (Channel 7).

Garrison is heard on the video saying "walk of shame." When Steele later posted the video to Snapchat, he added the captions "What black girl magic looks like" and "celebrating Black History Month," Craig said.

During Thursday's Board of Police Commissioners meeting, Craig answered questions about the incident. He said he expects to have both the internal affairs investigation and the environmental audit of the 6th Precinct completed within two weeks, and will submit a report to the board within a week after that.

Craig said an officer came forward and told him there were problems in the 6th Precinct, which prompted him to look into whether there was widespread racism there.

Craig said preliminary results of the precinct audit, which is headed by Assistant Chief James White, have found problems on the afternoon shift — Steele and Garrison's shift.

"The entire 6th Precinct is not engaging in this type of behavior; preliminarily, it appears to be isolated to the afternoon shift," Craig said."Those two officers (Steele and Garrison) set a tone for that shift that did have an impact on younger officers.

"There was an officer who came forward," Craig said. "The officer rejected this Snapchat video, and in doing so, he was booted out of a private chat room, and some of these 6th Precinct officers … said some things in that chat room that we consider inappropriate."

Craig also said he's concerned there are no female supervisors in the 6th Precinct. "I'm going to address that," he said. "I have some concerns on leadership and supervision. I’m looking at all aspects of this."

Commissioner Eva Garza Dewaelsche said: "I was appalled at the way the young lady was treated ... I would be outraged if they did that to my daughter."

Craig replied: "There are many members of this police department, white black, Hispanic, male and female, who are outraged We are not taking this lightly."

Craig said since the video surfaced, he's met with the department's Committee on Race and Equality, a group of officers that was set up in 2016 to address racial issues.

The chief reorganized the committee in January 2017 when a report from the group cited black officers’ complaints about discrimination from white supervisors and retaliation for complaints about the bias.

The report alleged “embedded racial attitudes and behavior exhibited by some in the command staff.”

“It was determined that the problems within the department were ... top-down entrenched discriminatory practices. Simply put, the racism that exist(s) in the department trickles down from command officers to the rank and file,” the report said.

After the report was released, former Detroit Police Officers Association union president Mark Diaz questioned the validity of the report, which he said was not based on facts.

During the public comments section of Thursday's board meeting, Detroit resident Eric Blunt said if the police department doesn't address racism, the city will have a riot.

"I'm concerned we are dancing around the race issue," Blunt said. "Some three years ago, you commissioned a report on race ... which said there was a historic and growing racism within the Detroit Police Department.

"Three years or three instances, something bad is going to happen," he said.

Earlier Thursday, legislators and civil rights advocates called for Craig to immediately fire Steele, but the chief insisted union rules prevent him from terminating officers so early in the process.

Craig said he explained to Gay-Dagnogo during a telephone conversation Wednesday that he's unable to fire the officers, per Detroit Police Officer Association union rules.

"When we talked, she said, 'I respect the fact that you have to preserve the union contract, and I believe in that,'" Craig said. "Then she puts out a press release calling for me to immediately fire the officer. She knows I can't do that." 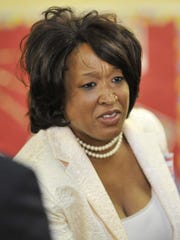 Gay-Dagnogo told The Detroit News she wrote the press release prior to talking to Craig.

"My statement went out before I talked to him," she said. "And I do respect union rules and due process.

"But it's important for women across the county and state to stand together, not only as elected officials, but as mothers, sisters and aunts," Gay-Dagnogo said. "What kind of person could do something like that? To mock a woman like that while she's walking home in subzero weather is unacceptable.

"My call is not just firing (Steele); my call is to look at MCOLES (The Michigan Commission on Law Enforcement Standards), to see if we need to require cultural sensitivity training to police throughout the state, since we've had issues with Michigan State Police as well," Gay-Dagnogo said. "We should also require mental health screening for officers.

Gay-Dagnogo said she was meeting Thursday with Gov. Gretchen Whitmer "to discuss how we can prevent another Ferguson here in Michigan," Gay-Dagnogo said, referring to riots that occurred in the Missouri town after a white officer fatally shot African-American robbery suspect Michael Brown in 2014.

The Detroit Coalition Against Police Brutality also issued a press release Thursday calling for Steele’s immediate firing, although they later reworded the release to demand that Craig "do the right thing."

“Steele should not be demoted,” coalition president Kenneth Reed said. “He has dishonored the badge and his sworn duty to serve and protect. He should instead be immediately suspended without pay pending dismissal.”

Craig said he realizes people are angry about the Steele video, but said he has to be careful about what he says, so as not to taint the case.

Derrick Devon Durham, 24, has been charged in the Jan. 24 shooting on the Southfield Freeway.

During Thursday's board meeting, Commissioner Shirley Burch said the chief was doing the right thing by waiting for the investigation before taking action against Steele.

"If we do rush into this and allow that officer to sue the city of Detroit, we’re in more trouble," Burch said. "Everybody out there is angry about what happened to that young girl. We feel that. But we have to go through due process."

In September, Craig fired rookie officer Sean Bostwick after the officer posted a Snapchat photo of himself in uniform with the caption "another night to Rangel (sic) up these zoo animals."

"I fired him less than 24 hours after I heard about that post," Craig said. "But that's because he was still on probation, and could still be fired without going through the union process."

Craig said even if he were to fire Steele now, it would be an empty gesture.

"At this stage, I can't even say whether I want to fire him, because his attorney might come back and say I had my mind made up before the investigation is complete," the chief said. "What's the use in me firing this guy today? You know what would happen: the arbitrator would rule in his favor and he'd get his job back."

That's what happened to former Detroit police officer John Bennett, who in 2003 was fired by former police chief Jerry Oliver for his posts on his now-defunct website firejerryo.com, including calling white command officers KKK members.

Bennett appealed the firing, and and an arbitrator in 2008 ruled in his favor, giving him his job back, along with back pay.

Bennett insisted Craig should fire Steele immediately — "and if he gets his job back, fine," he said Thursday. "That doesn't matter; he needs to make a stand when he's the chief in a city that's 82 percent black. He's the chief of police; this guy (Steele) made some statements that are terrible. It's not his concern what happens in the union process."

Detroit Police Officers Association president Craig Miller acknowledged that the union rules prevent officers from being immediately fired, but declined to comment further because the case is pending.

"Right now they're doing an investigation, and until they finish it, we have no comment," he said. "There's a process we have to go through."

Steele's video, which made national headlines, may not be the only racist video Steele posted on social media, Craig said.

During the internal affairs investigation into last week's video, Craig said allegations surfaced about another racially-insensitive video Steele allegedly posted to Snapchat during the holidays in 2017, in which he made fun of a family that had to walk home carrying their Christmas presents.

Craig initially reassigned Steele after hearing about the video and launching an internal investigation. On Monday, the chief suspended Steele and Garrison with pay, as required by the union contract.

The City Charter mandates the police chief must get permission from the Detroit Board of Police Commissioners to suspend an officer without pay. It was unclear whether Craig would ask the board to approve unpaid suspensions for the two cops.