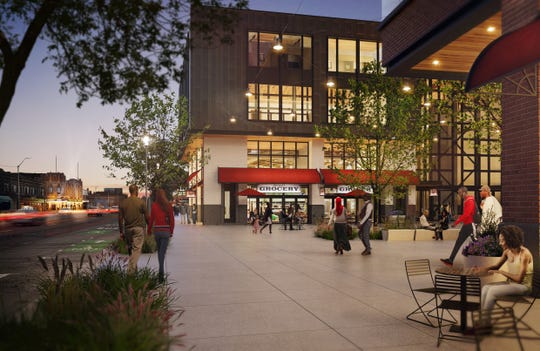 This is an artist's depiction of a proposed mixed-use development that would include a grocery store and affordable housing at East Jefferson Avenue and Piper Street. (Photo: W. Architecture and Landscape Architecture)

Detroit — A new development with a grocery store and affordable housing is expected to anchor a revamped Jefferson Avenue in east Detroit.

The project is a part of the Strategic Neighborhood Fund, a city initiative seeking to reinvigorate areas in the city outside downtown and Midtown with the help of philanthropic dollars. Jefferson Chalmers is one of seven neighborhoods the city is targeting to attract investment. Plans presented to residents Saturday seek to attract investment to return East Jefferson to the walkable, thriving retail corridor it once was.

"They had one of the original 20-minute neighborhoods; it used to function that way," Maurice Cox, Detroit's planning and development director, told The Detroit News ahead of the reveal. "People who live in this neighborhood (now) are accustomed to having to get into their car and go shop further east outside the city. ... We hope residents will see noticeable evidence that their neighborhood is being revitalized."

The plans the city will implement in Jefferson Chalmers would rehabilitate several homes, commercial properties and the closed Guyton Elementary School. The Neighborhood Strategic Fund, the already-in-place road bond, and possibly affordable housing subsidies and tax credits would fund the efforts.

City officials declined to provide a budget or timeline for the plans ahead of requesting ideas from developers for the projects but said their goal was to have residents see action on the plans they helped to create soon. 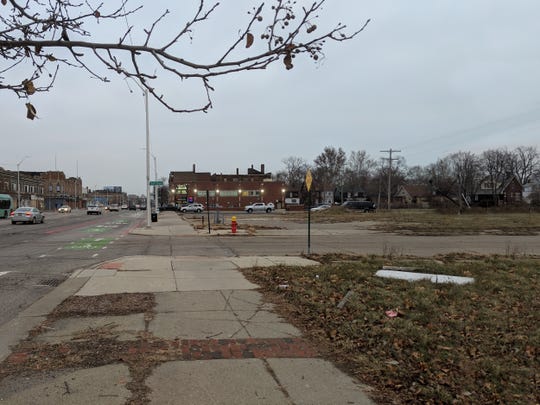 This is the 14-acre site at East Jefferson Avenue and Piper Street for which the city plans to put out a request for proposals for a mixed-use building with a grocery store and affordable housing. (Photo: W. Architecture and Landscape Architecture)

The plans, which included months of community input, officials say, are being heavily critiqued by some residents, while being praised by others.

Jocelyn Harris, who has lived in the neighborhood for more than 40 years, said "residents want development without displacement."

"We have no elementary school, community center or grocery store," said Harris, 69. "I see plans for a grocery store and I hope that does well but I came to this neighborhood years ago for the schools."

Anchoring the revitalization plans are a new building on a city-owned 14-acre parcel at Jefferson and Piper Boulevard. It would house a brand-name grocery store a developer would attract, and affordable rental apartments with a price goal of about $950 per month for a two-bedroom unit. The first phase would include 60-70 units, though the property has space for more in the future. The city expects to put out a request for proposals from developers in the spring.

Down the street, the vacant Vanity Ballroom building at 1024 Newport would come to life with first-floor retail and community space on the second floor. The city hopes to work with East Jefferson Development Corp. and Shelborne Development on the project and gather community insight on the types of businesses that should move into the 1929-built dance hall that has been closed for decades. Renovations are expected to begin in the spring, starting with stabilizing the building's roof.

The plans also call for the vacant Kresge building at 14300 E. Jefferson to become an Alma Kitchen restaurant and new offices for East Jefferson Development.

"These are tangible signs your neighborhood is reviving," Cox said. "They may be small, but their impact can be felt by residents who have seen them empty for many years."

The city also is working to preserve and grow the 600 units of affordable housing already existing in the neighborhood.

While it is unfeasible for Guyton Elementary to reopen, the city plans to turn the first floor into a community space and transform some of the classrooms into 40 affordable rental apartments with a $950 price point for a two-bedroom unit. A request for proposals will go out this spring.

"Right now, it's vacant and having a pretty negative impact on everything around it," Cox said. "So the notion of saving one of the schools and repurposing it for housing and for community uses in it, I think that will be a big win for the neighborhood."

Also in the spring, the city will seek a developer to rehabilitate 16 vacant land-bank houses to preserve into affordable, for-sale housing. They are also offering zero percent home repair loans and launched a nonprofit called Rebuilding Together, which will allow free home repair services for low-income houses in the neighborhood, said Allen Penniman, the city's urban planner leading the Jefferson Chalmer projects.

Penniman said the city also expects to close a deal by Thanksgiving to preserve 39 units of affordable housing at Grayhaven Villages at 13010 Avondale.

The General Services Department is leading efforts to renovate Alfred Brush Ford Park and its Lenox Community Center, as well. An Environmental Protection Agency grant also is providing funds for restoration efforts at Alfred Brush Ford, Riverfront-Lakewood East and Mariner parks groundbreaking on that project is expected to happen this summer.

Chief Park Planner Meagan Elliott said residents were most vocal about not having an indoor recreation center.

"People have a lot of memories at the former recreation centers, but they cost a tremendous amount to run and even more to maintain," Elliott said. "We are trying to be creative and find other uses for buildings like the Lenox Center where we could turn it into space for weddings or for indoor basketball during the winter." 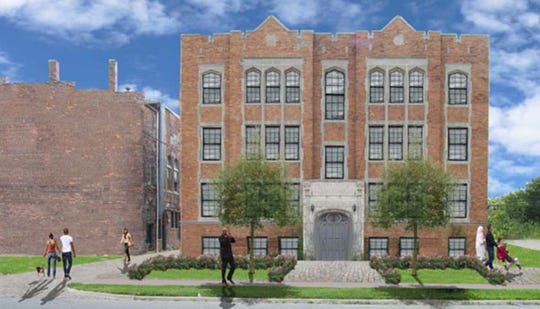 The Marlborough Building is under construction to house 15 affordable and market-rate apartments. The building has been vacant for more than three decades. (Photo: City of Detroit)

These projects join construction already underway at the vacant Marlborough apartment building north of Jefferson and the IDAO Building south of Jefferson. The $5.4 million redevelopment with East Jefferson Development and Shelborne would create 23 mixed-income residential units with 12 set aside for residents making $30,000 or less. They are expected to open in the fall.

Jefferson Chalmers saw the Norma G's restaurant at 14628 E. Jefferson. open in the fall. Owner and chef Lester Gouvia was a recipient of a $60,000 Motor City Match grant in 2016 to open the Trinidadian eatery.

The city's plans come following a year of efforts to gather community input. The final projects come from more than 512 total questionnaire responses, which made up one of the highest neighborhood response rates after residents went door to door.

"This is a wonderful, wonderful unique opportunity to define what successful neighborhood investment looks like," Penniman said. "(It's) investment that is community-driven and is for new and old Detroiters alike, and I think we have a good shot at doing this here."

Residents were invited to attend a community breakfast on Saturday to learn about the city's plans and share their concerns.

Farmer Deborah White-Logan, who owns five lots of land in the neighborhood, provides produce for the neighborhood through her Klassic Mobile Garden. She said the community and the people in it need help.

"I'm working with the city now to help us get funding for our startup so we don't have to charge residents a lot, especially the ones that can't afford it," she said. "The grocery store will help, but it's likely the prices will be more than us in the District 4 area can afford."

Others, like resident Cornelius Sims, said he's most excited for plans to stabilize the vacant areas and rehab retail along the corridor of Jefferson.

"I like having affordable housing for the community and one of the other things is it's a great American melting pot, a community that’s diversifying," said Sims, who has lived in the community for 11 years. "The parks are important as well as the houses that are going to be renovated. This is more than a good thing and they couldn't be doing a better job keeping us included and informed."

Residents of the Jefferson-Chalmers historic business district attend a community breakfast this morning to learn about city revilization plans over the next few years. Story: https://t.co/Chnzyb82Hx by @BreanaCNoble via @detroitnewspic.twitter.com/eklQOndh8m

The city is working to raise $100 million for the second leg of the Neighborhood Strategic Fund launched in March by the end of the year. Last month, Mayor Mike Duggan said foundations and corporations had supported the effort with $53 million.

In December, seven major companies in the region made a commitment of $35 million to the fund over five years. The contributors include Chemical, Fifth Third, Huntington and Flagstar banks, as well as Blue Cross Blue Shield of Michigan, American Axle & Manufacturing and Penske Corp.

Plans for the seven neighborhoods being supported by these funds are being rolled out in the coming months. Grand River Northwest residents already have heard the city's final recommendations for its neighborhood. After Jefferson Chalmers, the Campau/Banglatown and Russell Woods/Nardin Park efforts will follow.

The first segment of the Strategic Neighborhood Fund focused on Livernois/McNichols, Southwest/West Vernor and Islandview/Greater Villages.

The plans presented to Jefferson Chalmers residents on Saturday represent the projects the city has the resources to complete. Other project ideas will be preserved should funding opportunities arise, Cox added.

"This is the promise that we made that we are going to deliver on," he said. "The idea that Detroiters are now driving where the investments go, it is something we should be celebrating." 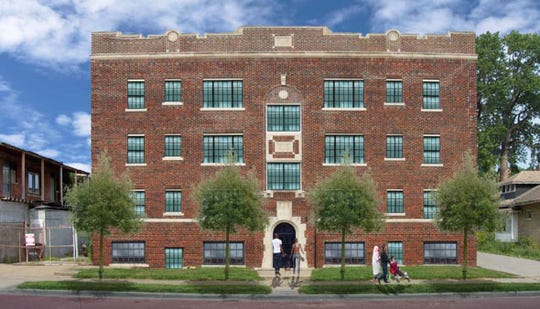 This is an artist depiction of the IDAO Building, which is under construction to have eight residential units with market-rate and affordable options. (Photo: City of Detroit)