FBI records and patients chronicle life inside Pain Center USA, a Macomb clinic with an armed guard, a Rolls-Royce-driving doctor and a body count.

Warren — Pain pill scalpers roamed the parking lot at a Macomb County clinic embroiled in one of the nation's largest health care fraud cases, chugging booze, smoking weed and buying drugs hot off the prescription pad, according to the FBI.

The FBI painted a deadly portrait of life inside Pain Center USA, which rose to prominence amid the nation's opioid epidemic, as part of its federal filing to convince a judge to approve the seizure of almost $26 million from the clinic's owner and medical team.

Until federal agents shut down the clinic in December, Warren's Pain Center USA had an armed guard, a body count and standing orders for patients to undergo unnecessary back injections in exchange for pain pills, according to a briefly unsealed search warrant affidavit obtained by The News. 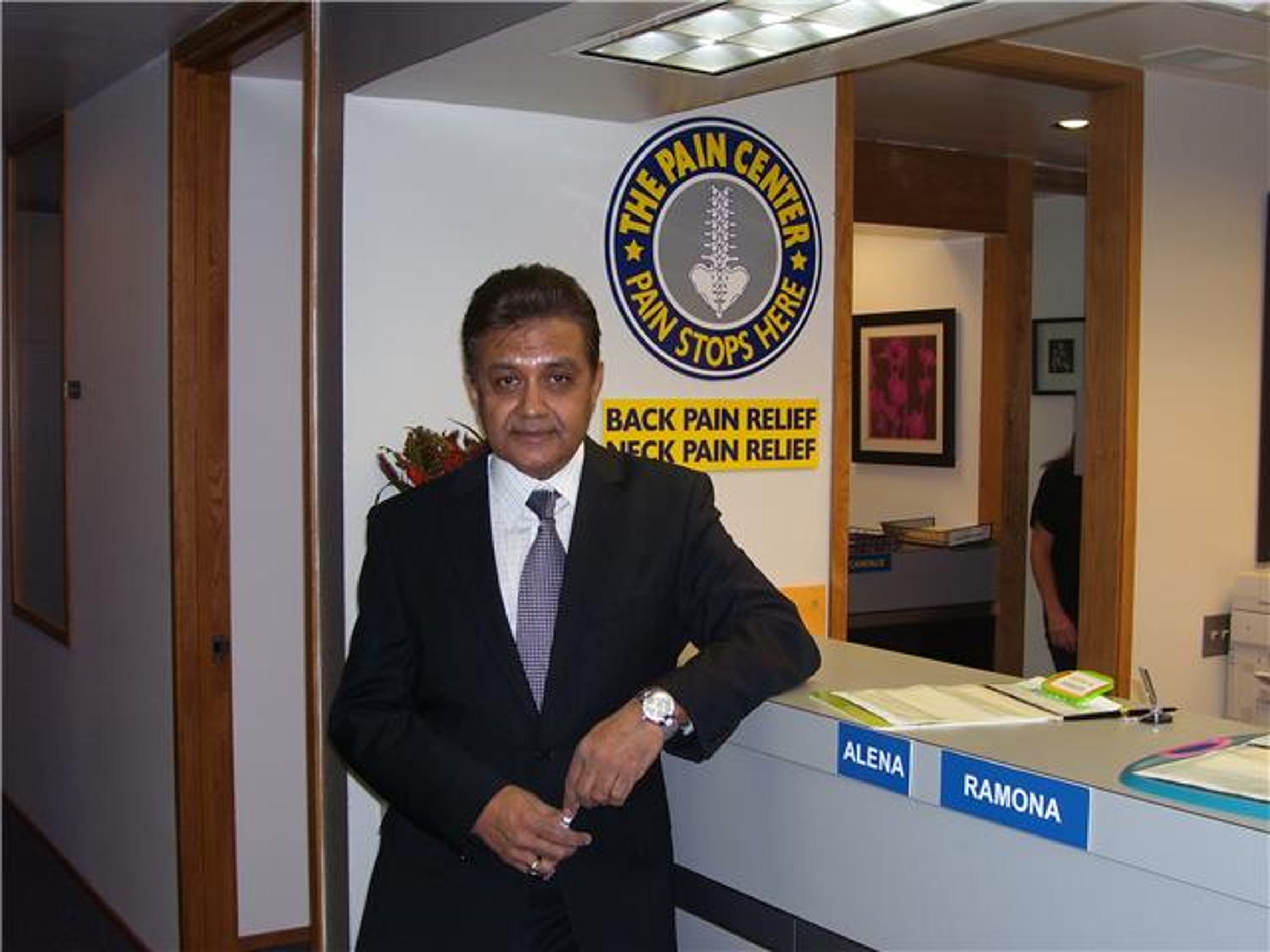 The affidavit included allegations that, if proven, offer a glimpse inside what investigators call one of the largest health care fraud cases in U.S. history.

Clinic owner Dr. Rajendra Bothra of Bloomfield Hills, an internationally acclaimed surgeon, and five other doctors face prison time if convicted. All have had not guilty pleas entered on their behalf.

Theaffidavit shows how the FBI infiltrated the clinic with an undercover agent and a whistleblowing doctor identified only as "Physician-1," who claimed to be disgusted by the scene inside Pain Center USA.

“I don’t feel like a physician right now," the doctor told FBI Special Agent Mark Kroger, according to the filing. "I feel like a fraud.”

Defense lawyers representing Bothra and five other clinic physicians either refused to comment or did not respond to multiple messages.

Clinic doctors prescribed more than 13 million doses of opioids and billed medical insurers almost $500 million since January 2013, according to the grand jury indictment filed in December.

They also lived a lavish lifestyle during the alleged conspiracy, according to public records and the FBI affidavit.

Bothra is worth at least $35 million, and clinic physician Dr. David Lewis bragged about earning $100,000 per month and driving a maroon-and-silver 1965 Rolls-Royce Silver Cloud, according to the FBI. 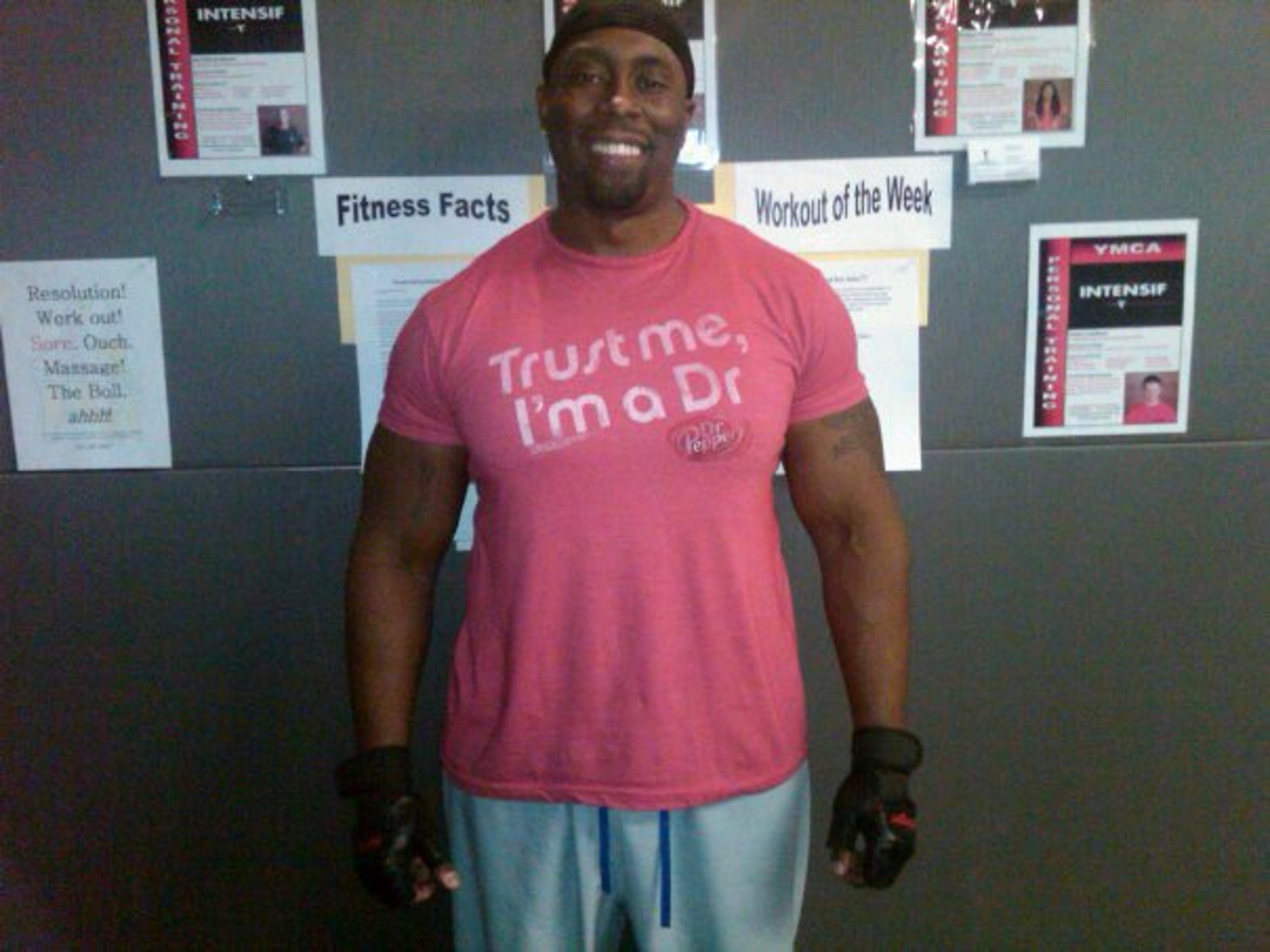 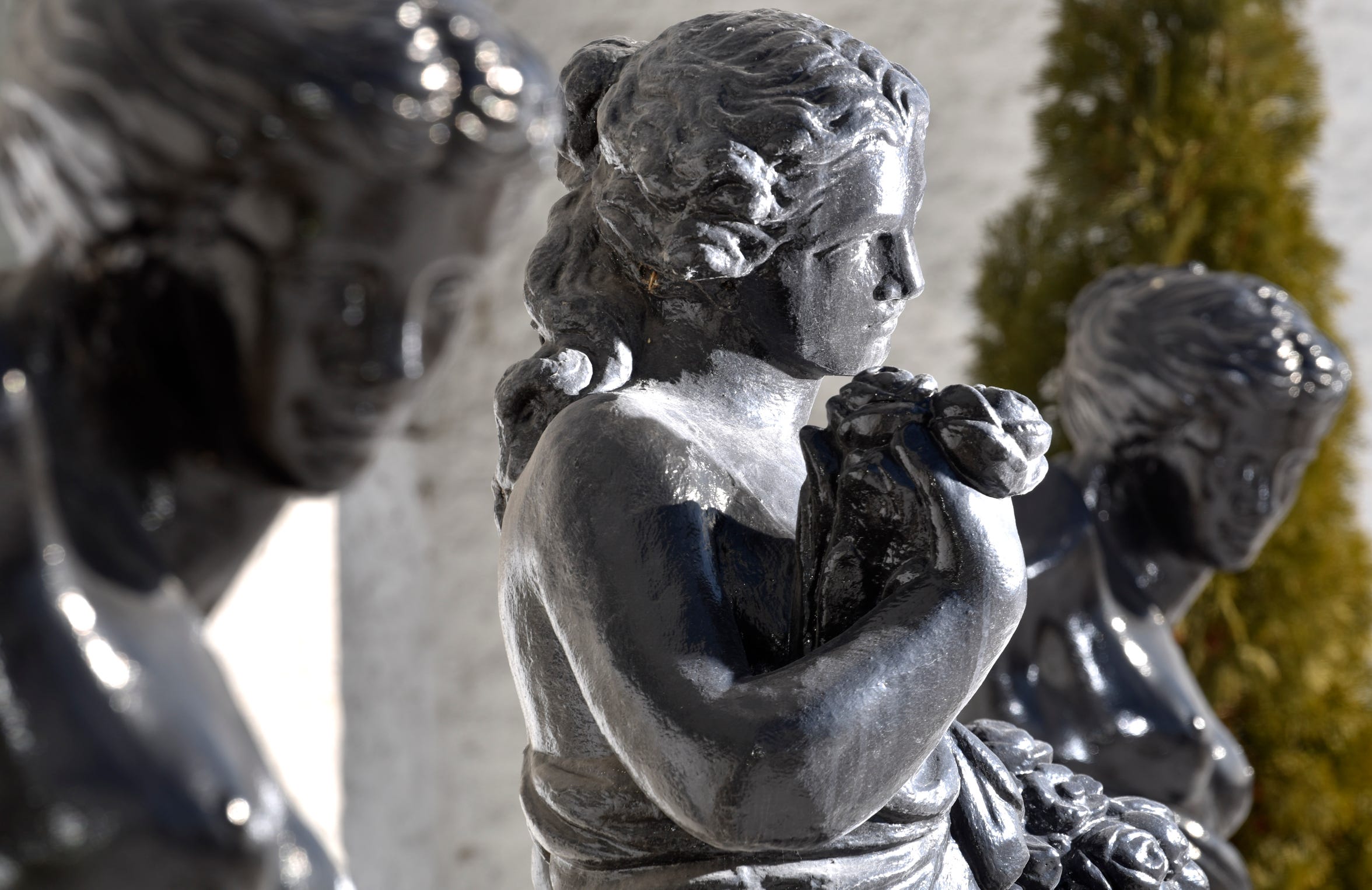 Greek goddess statues of Venus are displayed on either side of Diana The Huntress, center. The Warren health clinic, with Dr. Rajendra Bothra, of Bloomfield Hills, and a five-member medical team, was shut down by federal agents for operating an alleged multi-million dollar healthcare fraud, including, an illicit opioid scheme.
(Photo: Todd McInturf, The Detroit News)

The clinic, where one patient overdosed on heroin in a waiting room in October, is closed, and the parking lot is empty, except for a row of statues marking the doctors' reserved parking spots. They depict Roman goddesses, including Venus and Diana the Huntress.

Bothra, 77, was being hunted in early December; he just didn't know it yet.

On Dec. 4, the FBI received permission from U.S. Magistrate Judge Mona Majzoub to seize money from 19 bank accounts linked to Bothra and his team of doctors. The money was generated by a complex scheme to commit health care fraud and money laundering, according to the FBI.

The 109-page search warrant affidavit listing probable cause to seize the money was accidentally unsealed. The News obtained a copy before a judge resealed the document.

A spokeswoman with the U.S. Attorney's Office declined to comment, citing the ongoing investigation.

The scheme described by investigators involved pain clinics owned by Bothra in Macomb County. They are Pain Center USA and Interventional Pain Center, both in Warren.

The FBI describes a scheme involving pain pills and doctors billing insurance programs for unnecessary medical services. The services included back injections, sometimes performed by unskilled staff who jabbed patients with needles while hunting for the correct injection site, the FBI agent wrote.

One patient, identified only as "MG," walked into Pain Center USA in 2014 but hobbled out with a cane after receiving back injections, according to the FBI.

"MG stated that these appointments were more of a social gathering than a typical medical clinic appointment," the FBI agent wrote. "MG also observed that some of the patients waiting in the parking lot were drinking alcohol and smoking marijuana." 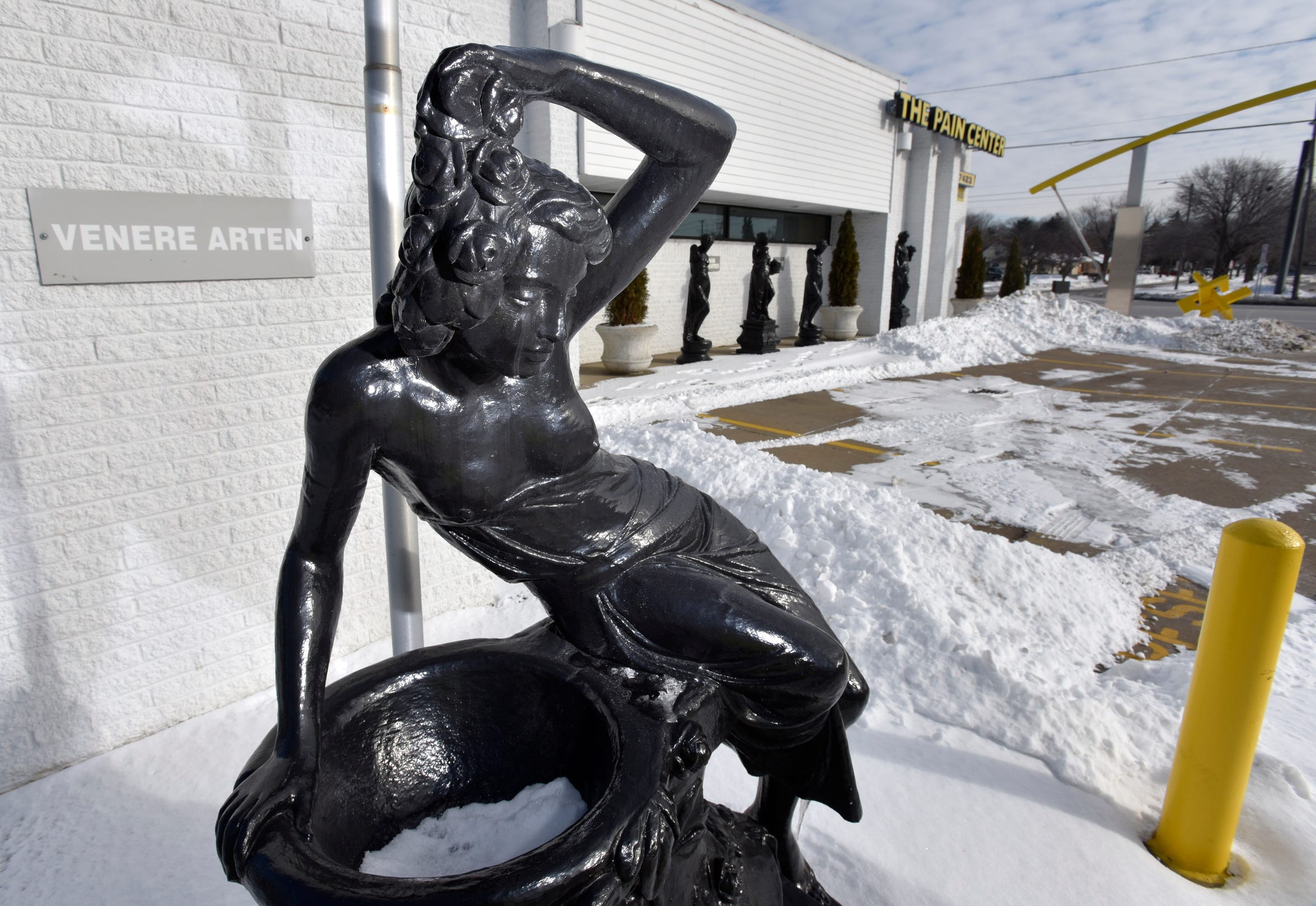 A statue of Greek goddess Venere Arten is displayed with other goddess statues outside The Pain Center in Warren, now closed. The clinic was shut down by federal agents on healthcare fraud charges.
(Photo: Todd McInturf, The Detroit News)

The clinic was a flurry of activity.

Doctors each saw 60-70 patients each day during visits that lasted as little as two minutes.

"It is Physician-1’s understanding that the standing order at the Pain Center is to prescribe pain medication and to conduct unnecessary ancillary services ... under unnecessary anesthesia," the FBI agent wrote.

According to the government, patients left with two things whether they needed them or not: Medical equipment, particularly back braces, and opioids.

One patient said "it was easier to get pain medication at the Pain Center than it was to get illicit drugs on the street," according to the search warrant affidavit.

Patient traffic spilled across Van Dyke into the parking lots of neighboring businesses, including an Italian restaurant and Jim Williams' heating and cooling shop.

Bothra was almost finished paving a parking lot at one of the 12 properties his real estate company owns at or near the clinic, Williams said.

"I wish the FBI would have waited three weeks so he could have gotten some cement down," Williams said. 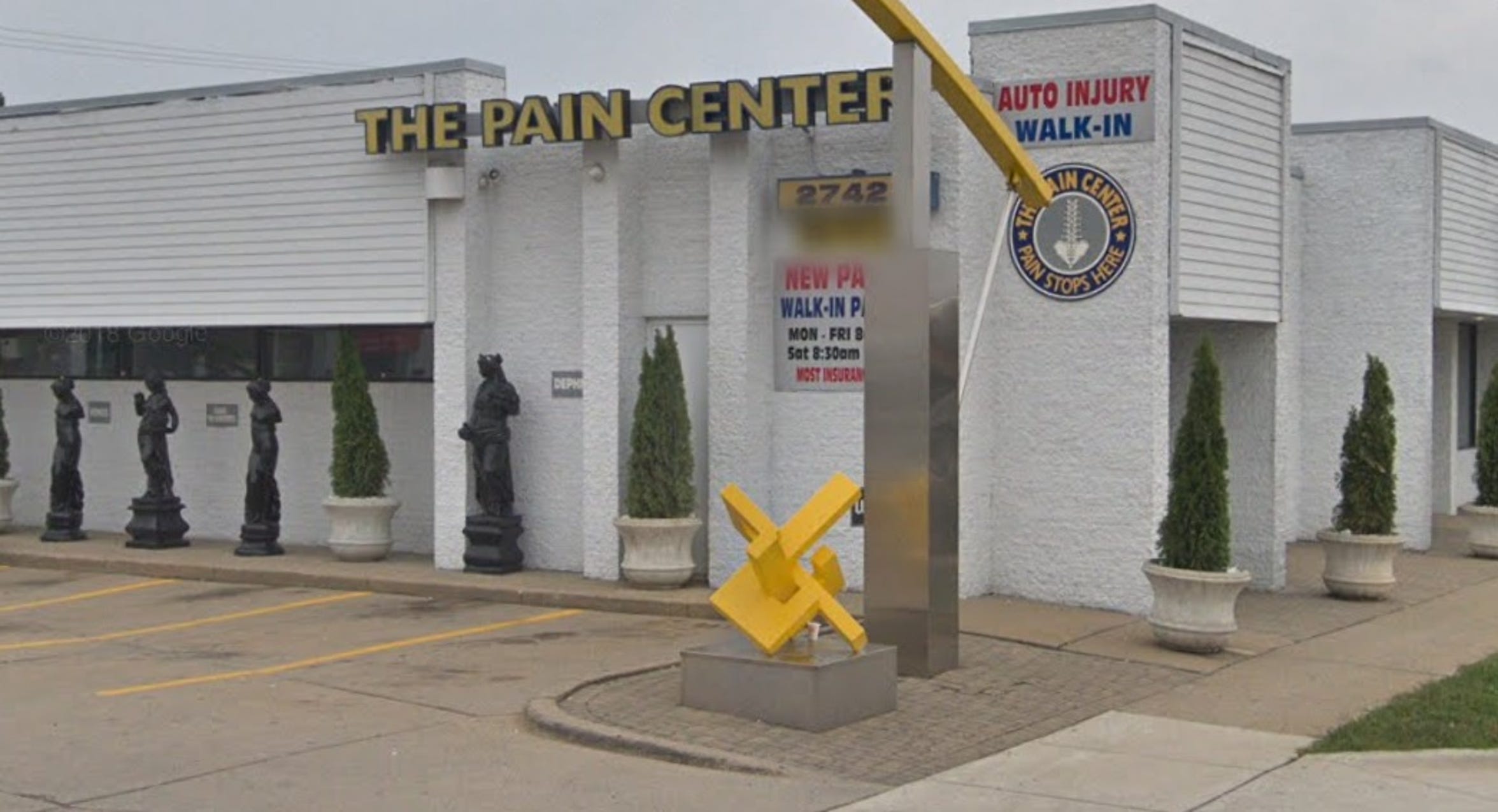 There was a financial incentive for doctors to perform injections and prescribe pain pills.

Pain Center doctors received a base salary and bonuses for medical services that could be billed to private or public insurance plans, according to the FBI. 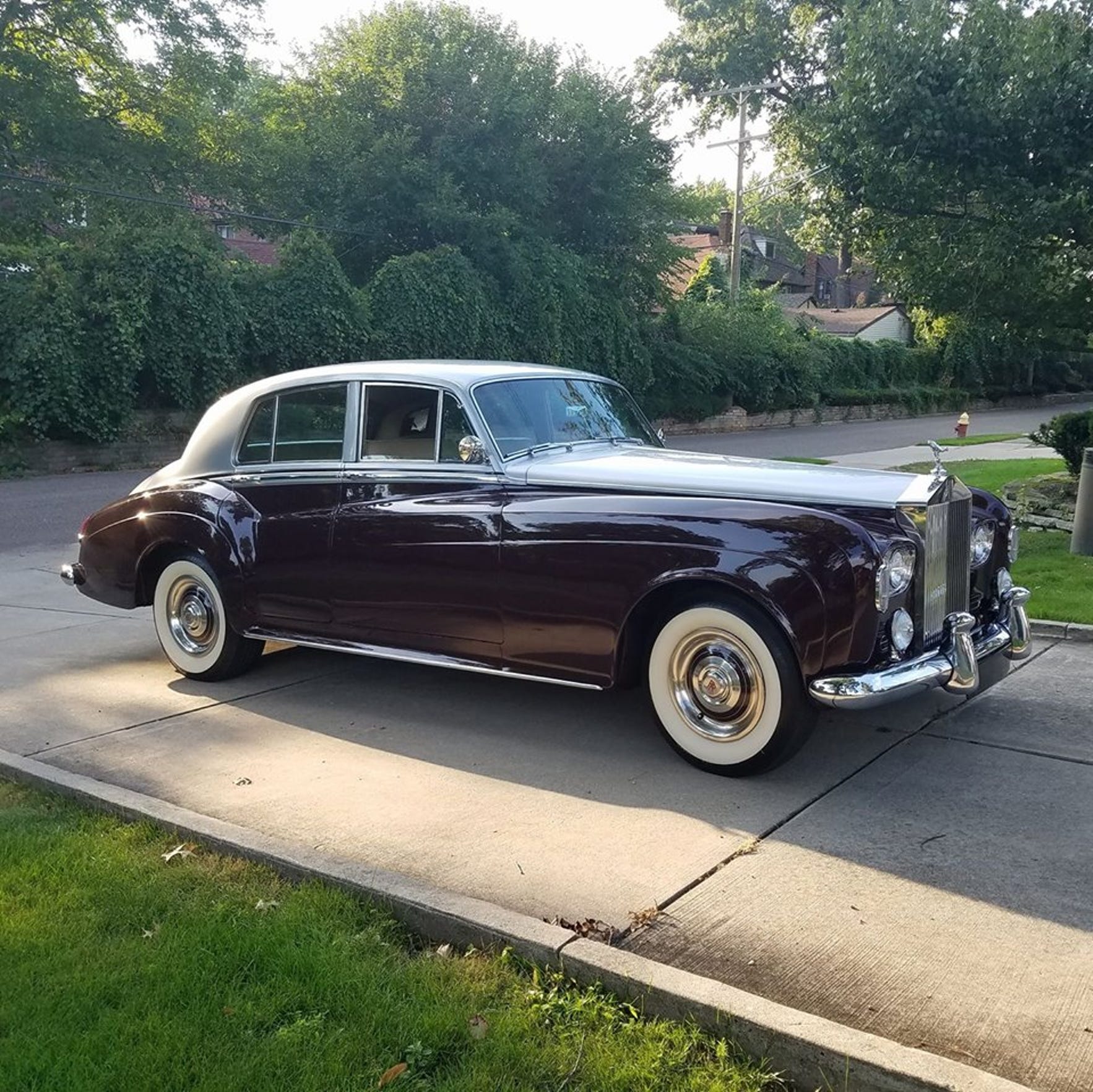 Among Pain Center doctors, Lewis, 41, had one of the highest rates of prescribing schedule II pain medication, a category that carries high potential for abuse and includes fentanyl and oxycodone, according to the FBI agent.

From 2016 to 2018, Lewis prescribed more than 930,000 doses of medication, and almost 94 percent were schedule II drugs, a category that includes fentanyl and oxycodone, according to the FBI.

Such a high rate of schedule II drugs is a red flag, the FBI agent wrote in the affidavit.

"This is often indicative of physicians and medical clinics that operate as a 'pill mill' with little to no regard for patient health...," the agent wrote.

A patient identified in the warrant records as "MM" agreed to receive an injection after Lewis said the procedure was required to receive pain medication, according to the court filing.

The injection was administered by a female clinic employee.

"The female failed to find the correct injection site on (the patient's) back multiple times before eventually finding what 'MM' surmised was the proper injection site," the FBI agent wrote.

The injections and pills led to big bills.

Since 2013, the doctors billed more than $182.5 million to Medicare, $272.6 million to Medicaid and $9.2 million to Blue Cross Blue Shield for services and equipment that were medically unnecessary, ineligible for reimbursement or not provided, according to the indictment.

Federal agents have seized at least $25.9 million from doctors indicted in the criminal case, relatives and the pain clinics. Click on the bubbles to find out how much agents seized and whose bank accounts were searched by the FBI. (Map: Robert Snell/The Detroit News)

Bothra, a surgeon, humanitarian and native of India who in 1999 received that country's highest civilian honor, known as the Padmashri, amassed a fortune during his medical career.

Bothra and his real estate company own four condominiums in downtown Royal Oak, three homes on two continents —including a $300,000 condo in Mumbai, India — and one retirement account worth $8.5 million. That is according to public records and evidence that emerged during Bothra's fight to be released from jail pending trial.

An island estate owned by Dr. Rajendra Bothra in Waterford Township was recently listed for sale for $1.99 million. (Video: YouTube)

Federal agents have spent months trying to pinpoint the value of Bothra's fortune.

Bothra originally told court officials he was worth $10.4 million. His lawyer later said Bothra's net worth was as much as $35 million.

FBI agents seized at least $17.2 million from bank accounts linked to Bothra and his family, according to a forfeiture notice filed in federal court. Bothra could lose the money if he is convicted of crimes.

The government left untouched an $8.5 million retirement account that Bothra is trying to liquidate so he can pay lawyers and leave jail on bond. He remains behind bars, though, because prosecutors are appealing a record $7 million bond Bothra received in January.

Bothra and the five other doctors, including Dr. Christopher Russo, 50, of Birmingham, are scheduled to stand trial in July.

Nobody charged in the case prescribed more drugs than Dr. Eric Backos.

The 66-year-old Bloomfield Hills doctor prescribed more than 5.9 million pills from 2013 to 2018, according to the FBI. More than 86 percent of the drugs belong to a category that includes fentanyl and oxycodone.

In a 14-month period, three patients received prescriptions from Backos and died after leaving the clinic and overdosing, according to the FBI.

Warren resident Marcia Groves was a clinic patient and a pain pill addict after suffering a back injury while working at a Warren stamping plant.

Groves, 53, received treatment from three clinics in 2013, including Pain Center USA, according to court records.

After a 15-minute office visit, Backos prescribed morphine and hydrocodone, according to the FBI agent.

Three days later, she was dead.

"I found her dead in her bedroom," daughter Kara Boyd told The News. "This has put me through so much pain for so many years."

Nine months later, a Ferndale man overdosed on multiple prescription pain medications one day after Backos prescribed oxycodone, according to the FBI.

The indictment rekindled painful memories for Boyd, who tried to stifle the pain of her mother's overdose death by moving from Macomb County so she wouldn't have to drive past Pain Center USA.

"It’s definitely bad news all around there," she said.

Share
Enjoy a limted number of articles over the next 30 days
Subscribe Today
Log In
Subscribed, but don't have a login?
Activate your digital access.
Join the Conversation
To find out more about Facebook commenting please read the
Conversation Guidelines and FAQs

FBI records and patients chronicle life inside Pain Center USA, a Macomb clinic with an armed guard, a Rolls-Royce-driving doctor and a body count.