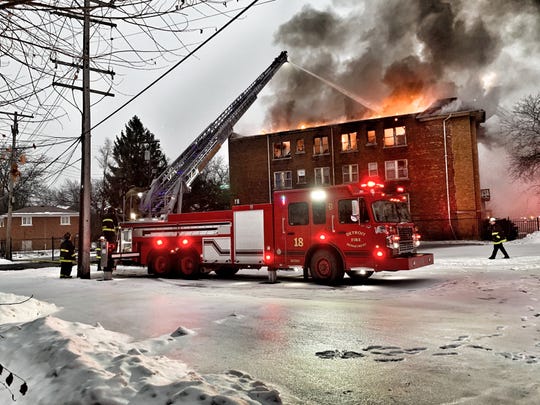 Detroit firefighters battle a blaze in a three-story apartment building at Linwood and Oakman on Detroit's west side in below-freezing temperatures Wednesday, February 20, 2019. (Photo: Alex Haggart, Special to Detroit News)

Detroit —  A person of interest is in custody following an apartment fire on Detroit's west side Wednesday, authorities said.

The Detroit Fire Department responded to a blaze at 4:25 p.m. in the 1700 block of Oakman Boulevard near Linwood Street. There were no injuries.

"There was fire showing out the windows and through the roof" when firefighters arrived, said Deputy Fire Commissioner Dave Fornell.

Fornell said the fire overtook the crew's efforts to get inside the building and blaze spread from the third floor through the roof.

He said firefighters evacuated a few people from the building. It was unclear if the building was occupied or under renovation.

No one was injured in the blaze, which burned for three hours.

Authorities detained a person of interest, Fornell said. The fire was under investigation, he said.

"Because of the condition of the building, it is difficult to speculate the cause of the fire because it's too dangerous for us to get our investigators inside," Fornell said.