Francois-Phillippe Champagne, Canada's minister of infrastructure and communities, said up to 2,500 workers could be employed at the site. 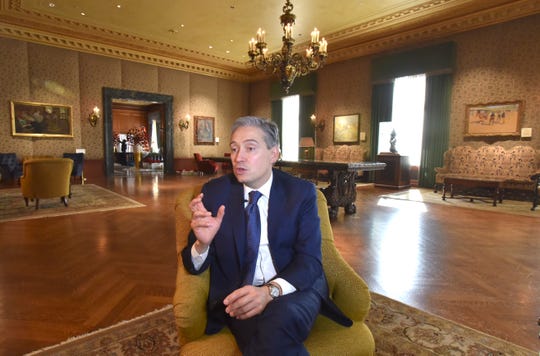 “The bridge is all about improving the lives of people,” he said Friday during a visit to Detroit to meet with business and political leaders. “It will be one of the largest bridges in North America, and it’s happening in our backyard, so we all should be proud.”

Site preparation is underway for construction of the bridge, which is to be completed in 2024. Champagne said up to 2,500 workers could be employed at the site at peak times.

"That's a lot of people," he said. "Maybe people will move their families here. There will be work available in the hotel industry, restaurant industry and that will benefit both sides. There will be work for trades people and white-collar workers."

When completed in 2024, the span will be the longest cable-stayed bridge in North America. The span will feature a white color, LED lighting and towers that will incline toward each other until they meet high above the bridge deck. Its lifespan is projected to be 125 years.

Asked how he sees the bridge being used, he said he hopes it will encourage more travel across the Detroit River both for business and pleasure.

Francois-Philippe Champagne, Canada's Minister of Infrastructure, talks about his country's excitement of the Gordie Howe International Bridge. The Detroit News

"My dream would be to see families using the bridge to pop in on one side on the other during the weekends, maybe just to get ice cream," he said. "During the week, truckers, merchants and a lot of commuters, like nurses who leave Canada to work in the U.S., will be using the bridge."

He added, "Our goal, with that of the Michigan Department of Transportation, is to make their lives easier. This is a new wind of opportunity, where everything is possible."

Champagne said the naming of the bridge for a hockey legend symbolizes something the U.S. and Canada have in common.

"It's something we all can relate to," he said. "If there's one thing that unites us, it's hockey. Sometimes we win, sometimes you win. Sports is a way to unify nations. We are allies and friends. Gordie Howe embodies the best of hockey."