Shinola's not 'saving Detroit' by itself, Detroiters say

Shinola's not 'saving Detroit' by itself, Detroiters say 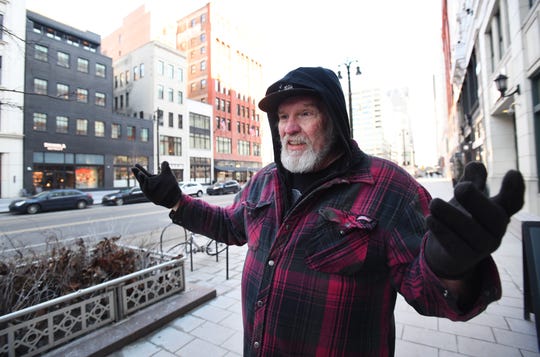 Jim Karaszewski, 66, of Detroit gives his thoughts on the Shinola comments on the Oscars last night across the street from the Shinola store and hotel on February 25, 2019. (Photo: Daniel Mears, Detroit News)

Detroit — It was a moment in time that caught Detroit by surprise.

In an acceptance speech for the best original screenplay award at the Oscars, "Green Book" director Peter Farrelly rattled off a list of people he wished to thank before abruptly unleashing praise for Detroit's ubiquitous assembler of watches and other luxury goods.

"Shinola watches ... it's unbelievable, they're saving Detroit," Farrelly proclaimed Sunday night as he flashed his timepiece.

The statement immediately hit a nerve in a city that's sensitive to its national reputation — especially following an exit from the country's largest municipal bankruptcy less than five years ago — and drew almost instant blowback on social media.

While Shinola Detroit LLC has grown to employ more than 600 people since setting up shop here in 2011, Detroit's revival is greater than one brand or figure, city leaders and residents were quick to note.

In particular, Aaron Foley, a writer and former journalist who oversees the city of Detroit's "The Neighborhoods" publication, said Farrelly’s speech was a “mishandled opportunity” because in the city’s overall narrative, it’s just “one part of the story.”

“It is a little bit of a slap in the face for Peter Farrelly to say that Shinola alone is doing it. We can’t have the silver bullet mentality anymore,” he said. “When you have city government, all of the nonprofits, all of the small businesses, all of the churches, the neighborhoods, the residents ... it’s a team effort.”

In a statement, Shinola congratulated Farrelly on winning Oscars for best original screenplay and best picture, noting the director has been a "friend of the brand for years."

“The Shinola shout-out during his speech was completely unplanned and unexpected," the statement said. "While we are so thankful for the love we did want to make it clear that without the city of Detroit, there would be no Shinola. The city gave our brand life, and it’s something we will never take for granted.” 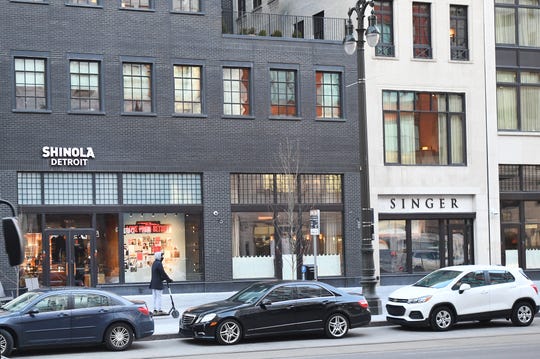 A guy on a motorized scooter glides past the Shinola store on Woodward Avenue in Detroit Monday afternoon. (Photo: Daniel Mears, Detroit News)

Shinola has two stores in Detroit as well in Los Angeles, London, Washington, D.C., and other major cities. Its manufacturing arm, which is based in the College for Creative Studies in Midtown, employs up to 200 people, and its marketing campaign touts the company's Detroit roots.

Walking outside the Woodward store and hotel Monday, 66-year-old Detroit native Jim Karaszewski said Farelly's comment was an example of the misinformation about the city and its history.

Shinola officials declined to comment beyond the company's statement. Farrelly was not available for comment on Monday.

“Statements like that rightfully rub Detroiters the wrong way because it ignores the contribution and commitment of so many people throughout this city and minimizes them,” she said.

“If you actually know Detroit, you know our success should be attributed to the people who live in Detroit, who work in Detroit and are creating jobs and opportunities in Detroit,” she said. “If he ever really wants to know about Detroit, he should come back. I know a few great people that would gladly show him the city and introduce him to some of the many people who are playing such an important role in our city and its future.”

Shinola founder Tom Kartsotis and his team from Texas-based investment group Bedrock Brands came to the city with the intention of hiring 100 people to make watches for luxury retailers, such as Tiffany & Co.

"We were asking customers $550 for a watch nobody had seen or touched, and frankly, we were barely sure we could make it," Kartsotis said during the opening of the Shinola Hotel in December. "We were shocked when it sold out instantly."

"We abandoned the idea of making watches for other people," Kartsotis said, "and decided to create a brand that was predicated on creating world-class jobs in a world-class city."

But nearly a decade later, the comment of Shinola "saving Detroit" is outdated, said Michael Bernacchi, a marketing professor at the University of Detroit Mercy.

"It’s a memory of the past," Bernacchi said. "It showed naivety and a bit of stupidity. At one time years ago, it would have been a right and true acknowledgment. Things were not going so swell at that time.

"It was a great positive step that they were going to make a contribution. It was appropriate then. It's not appropriate today except to recall the memory of it."

Bernacchi said Detroit's revival also has much to do with the upswing in the marketplace, the momentum of the automotive industry, and the investments by Gilbert and other developers.

Foley agreed: “I’m not saying he should not have shouted out Shinola in the way he did. But it kind of adds to that idea that Shinola is the only thing we have here. It was a really mishandled opportunity to really show Detroit, not just Shinola. I don’t think Peter Farrelly is responsible for being a spokesperson or ambassador for Detroit. But now in hindsight, he can look at what we’re saying here, come to Detroit and see what’s going on.”

Councilwoman Raquel Castaneda-Lopez said she has a message for anyone who believes they’re “saving Detroit.”

“Detroiters, born and bred, have been saving their communities & sustaining the city for generations,” she said in an email. “Our grit, creativity, perseverance and spirit to overcome got us through hard times — not you. WE are our own warriors.”

Shinola's status in Detroit has come under scrutiny before. In 2016, Shinola dropped the company’s “Where American is Made” slogan after a probe by federal regulators revealed the Detroit-based watch manufacturer relied too heavily on overseas parts.

On Monday, several Detroit residents said they thought Farrelly's shout-out during the prominent awards show was beneficial for the city.

Maureen Dritsan, a 26-year resident of Detroit's East English Village neighborhood, said the comment was "charming," and that she didn't take the comment as a snub that Shinola alone is "saving Detroit."

“It’s one of the new businesses that has come in and helped in its renaissance,” she said. “I don’t think anybody would believe that one little company would come in and save the city. It’s a big effort.”

From the perspective of Cortez Ellis, Shinola is saving the city he calls home. The 25-year-old Detroiter works in the Shinola Hotel's evening bar.

"Shinola is a beacon of light," Ellis said. "It's made jobs for a lot of Detroiters. I think it's bridging the gap between the new and the old."

The award show itself has faced scrutiny over a lack of diversity and instances of award rosters with all-white acting nominees. In 2016, the Rev. Al Sharpton led a protest near the red carpet over a lack of black nominees in the movies and at the Oscars.

The movie "Green Book" also has received criticism over its handling of race relations. The movie centers on a working-class Italian-American bouncer who becomes the driver of an African-American classical pianist on a tour through the South in the 1960s.

“The one thing that’s frustrating for most people is the platform on which the statement was made,” Foley said. “It’s the Oscars. The Oscars already have a history of intersection of diversity and representation. On a national level, there are only a few things Detroit is known for. But locally, we know how much we have here.”