Forbes to hold Under 30 summit in Detroit

Forbes to hold Under 30 summit in Detroit 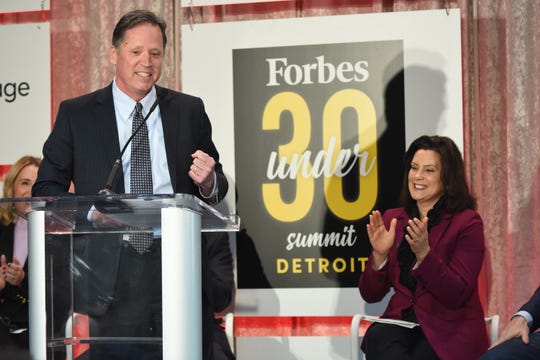 Forbes CEO Mike Federle announces that Forbes will hold their Under 30 summit in the Detroit for several years. Gov. Gretchen Whitmer, right, was in attendance. (Photo: Max Ortiz, The Detroit News)

Detroit — Believing Detroit is stepping into its place as a global innovation hub, Forbes magazine executives announced Tuesday they will hold their Under 30 summit in the city for several years.

The event annually attracts thousands of entrepreneurs from around the world to learn, connect and develop the next groundbreaking solutions and businesses. It comes in conjunction with the business publication's annual Under 30 list honoring young entrepreneurs, innovators and influential leaders.

Forbes CEO Mike Federle said the leaders who make that list have perseverance and vision, but above all, they have resilience — which is what Detroit demonstrated when it exited its Chapter 11 bankruptcy nearly five years ago.

"From the city’s roots as the fur trading capital to the birth of the automobile manufacturing to the diversification of industries now present across the region, Detroit has always commanded a leading role on the world stage," Federle said. "All of us at Forbes passionately believe in Detroit and the region are poised to play an even bigger role globally in years to come."

Dan Gilbert, founder and chairman of Quicken Loans, said the summit is a three-year commitment. It will take place in October 2019, 2020 and 2021. The event will be presented by Rocket Mortgage by Quicken Loans.

"We expect this event in Detroit to be a big feather in the cap for talent attraction and business attraction," Gilbert said. "We hope big ideas will be born here because of this."

The multi-day national conference, which will take place Oct. 27-30 this year, is expected to draw around 10,000 entrepreneurs from 70 countries, Gilbert said.

"That’s a lot of people from a lot of places with a lot of ideas," he said.

Under 30 features high-profile speakers, artists, demonstrations and networking events. There also will be a music and food festival, events for women and a day of service.

Tickets for the summit in Detroit start at $370. By late Tuesday afternoon, the super early bird tickets were sold out.

“I think those who aren’t from Detroit will find that you’ll love it,” Wayne County Executive Warren Evans said. “I think that you’ll see what Dan Gilbert’s been seeing. He’s probably the biggest 'ra-ra' for the city of Detroit for a long period of time. There are a lot of things going on here.”

Most recently, Boston hosted the Under 30 summit, now in its sixth year, from 2016 to 2018. Forbes also holds international Under 30 conferences in places such as Amsterdam, Israel and across Asia.

Grace Hsia, co-founder and CEO  of Ann Arbor-based Warmilu, LLC, has been to Forbes’ Under 30 summits in Israel and Boston. Hsia, whose company makes non-electric baby warmer blankets, was recognized as a Forbes 30 under 30 in 2016 in the manufacturing industry category.

“You’re meeting some of the people you see in the news,” she said. “You’re meeting people like Mike Phelps, Kendrick Lamar, Jason Derulo. The big heavy hitters in media and entertainment as well as some of the top investors. ... There’s the potential for investment from that international network.” 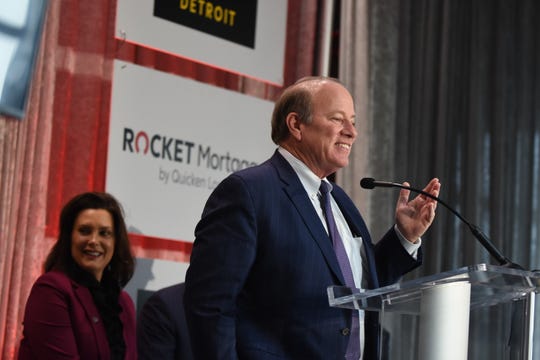 The Tuesday afternoon press conference followed a gathering involving Gov. Gretchen Whitmer, Mayor Mike Duggan and Evans in Detroit over the announcement that Fiat Chrysler plans to invest $1.6 billion to convert two plants that comprise the Mack Avenue Engine Complex on the city's east side — including long-idled Mack II — into an assembly plant to build the next-generation Jeep Grand Cherokee as well as new three-row and plug-in hybrid versions of the highly profitable SUV.

"The FCA announcement was a wonderful thing for our whole state," Whitmer said. "But this is about the next 5,000 jobs in Detroit and the next 6,500 jobs and beyond. We are thrilled to be your host, and we are keeping our foot on the gas. The Michigan story is one we're writing every day and where there is opportunity for all of us."

“What you guys are accomplishing here, it's really, really amazing. The growth, the energy, the feel of today, the optimism, those are the traits that actually define the Under 30 summits we do,” said Lane, who founded the Under 30 summit. "Now Detroit is the global flagship."

Since 2015, 58 young entrepreneurs from Michigan have made the Under 30 list. In November, Pistons basketball player Blake Griffin, who also has started a Hollywood production company, graced the cover of Forbes' Under 30 issue.

The Forbes conference would be the latest event to bring notice to leaders of Detroit's renaissance. In October, CityLab brought hundreds of city leaders from around the globe to Detroit to discuss solutions to urban challenges.

"This is a time where the city is becoming more entrepreneurial," Duggan said at Tuesday's press conference.

He expressed his appreciation for Forbes’ plan to “shine a spotlight on the city” for the next three years.

Duggan noted the number of large companies with offices in Detroit, including Amazon, Google, Microsoft and LinkedIn, which he said years ago would have chosen to be in the suburbs. He also noted Ford Motor Company’s plans to locate in Detroit a campus for its autonomous and electric vehicle businesses as well as design urban mobility services.

“We are becoming a place that’s attracting folks,” Duggan said. “Those of you who are entrepreneurs, entrepreneurs are rebels by nature. The extreme rebels find their ways to the city of Detroit.”