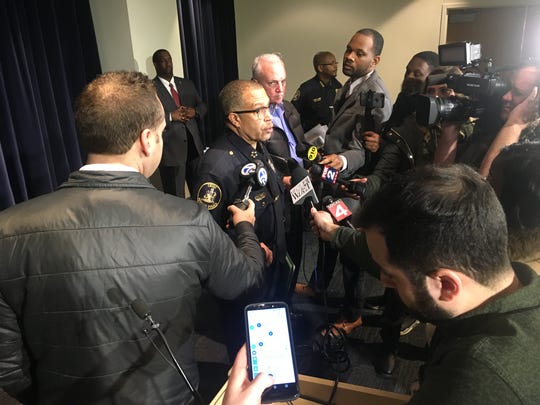 The chief added he will submit a warrant request to Wayne County prosecutors for possible criminal charges against former Detroit police Cpl. Gary Steele and his partner, Officer Michael Garrison, after administrative investigations are completed.

In a case that's drawn national media attention, Steele and Garrison were suspended with pay Feb. 4 after Steele posted the video showing a Jan. 29 traffic stop on Detroit's west side.

Steele and his partner Garrison, who work in the 6th Precinct, are heard on the video mocking Ariel Moore, the woman they'd pulled over.

Garrison is allegedly heard on the video saying "walk of shame."

Craig said he fired Steele during a hearing Tuesday. He said Steele faced 24 allegations, and that internal affairs officers sustained 11 of the allegations.

Craig said Garrison's termination hearing is scheduled for next week. The chief did not indicate whether he plans to fire Garrison.

During the investigation, Craig said his detectives uncovered other cases of Steele making disparaging remarks about black citizens.

"There were at least two separate instances where the officer called African-Americans in a public space 'Keishas,' 'Jakes' or 'homeys.' What made it derogatory and degrading was the context in which it was used. Some would say 'what’s wrong with Keisha?' but ... it clearly has racial issues when you make comments like that about a certain group of people."

Elected officials and civil rights groups had been pressuring Craig to fire the officers, but the chief insisted he had to follow the union rules, conduct an investigation and hold hearings.

"This was an emotionally charged incident," Craig said. "People wanted me to fire him right now, but there's a process we have to follow."

"I think it was handled the right way, and I'm appreciative of the chief getting this cancer out of the Detroit Police Department."

Steele is expected to take the decision to arbitration, Craig said.

Craig said Wednesday his investigators interviewed 55 officers, and the probe uncovered instances of Steele lying to police officials, policy violations involving the actions on the video itself and other instances of Steele acting inappropriately toward other black citizens he'd encountered in separate incidents.

When Craig learned of the video, he ordered two parallel investigations: The internal probe to determine whether the officers' actions on the video violated department policy; and an "environmental audit" to see if there were problems with racial animosity in the 6th Precinct, where Steele and Garrison were assigned.

"I estimate that (will be completed) in about two weeks," Craig said. "We’re assessing supervisors who knew or should’ve known that there were (racial) issues and no action was taken."

Assistant Chief James White, who is in charge of the environmental audit, said investigators have interviewed more than 100 people.

Craig stressed: "This does not reflect on the vast majority of officers at the 6th Precinct."

Detroit NAACP president Wendell Anthony said at the press conference: "It appears justice has been served at this point. (Steele) has been held accountable through the department.

"I believe we have something going on in Detroit that's unique: We have the ability to talk to the chief and engage the police," Anthony said. "That's one of the reasons we have not had the kind of upheavals that we've had in other communities.

"There are a lot of good police officers on the department, and as the chief said, this is not a paintbrush against all of them. But the ones who are bad apples need to be extracted from the department. We hope this is a message that others can learn."

Lisa Carter, a member of the Board of Police Commissioners, added: "As I think about this incident, I can't help but think about me and who I am. I am black magic, to be quite honest with you, and I was appalled to see what that young lady went through and what the officer posted.

"The board had confidence that the chief and his staff would conduct a thorough investigation, and they did," Carter said. "(The chief) has spoken, and we're happy with the decision he made."

Moore's attorney, Geoffrey Fieger, told The Detroit News he plans on suing the city over the incident, although it was unclear when he planned to file the suit.