DNR: Detroit spot periodically will open on weekends and holidays but no new reservations taken for events until work complete in July 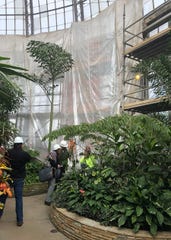 Crews shore up the conservatory dome for removal of a column as part of the project at the Belle Isle site. (Photo: Michigan Department of Natural Resources)

The Anna Scripps Whitcomb Conservatory at Detroit's Belle Isle Park in Detroit is slated to remain closed for new events until a major renovation project is completed in July, state officials said Monday.

The feasibility of opening the conservatory on weekends amid the $2.4 million project, including for the upcoming Easter holiday, will be evaluated in April, the Michigan Department of Natural Resources reported.

Meanwhile, the spot "periodically will open on the weekends and holidays as construction conditions allow," according to the release. "Previously reserved events for the conservatory show room will continue to be held during  construction. Reservations for new events will not be taken until the construction work is complete."

Visitors can check the conservatory's Facebook page to learn about changes in hours.

A Detroit contractor started replacing the lower portion of the original steel trusses that support the conservatory dome, also known as the Palm House, in early October. Some 10 of the 20 columns have been replaced, with complete replacement slated for May. After the lower truss replacement is completed, repairs to the upper truss columns and gutters will continue.

The first phase of a $2.4 million revitalization plan for the Anna Scripps Whitcomb Conservatory and the Belle Isle Aquarium is funded with approximately $1.4 million from DNR parks and recreation capital infrastructure funds and a $1 million grant from the Ralph C. Wilson, Jr. Foundation to the Belle Isle Conservancy.