The Oct. 14 shooting, on a Lodge Freeway service drive, killed a 27-year-old man and wounded two other people 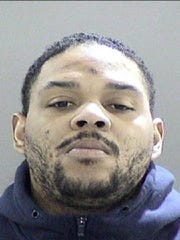 Detroit — A 35-year-old felon faces premeditated murder and gun charges in a mid-October triple shooting on a Lodge Freeway service drive that killed a 27-year-old man.

The triple shooting took place about 2 a.m. Oct. 14, on the 20000 block of the James Couzens Service Drive, south of Eight Mile.

Police said four people in a Dodge Charger had left a club and were headed downtown when a white Ford Fusion pulled alongside.

Shots came from inside the Fusion. A 29-year-old man in the Charger was able to flee on foot, but a 21-year-old woman, a 24-year-old man and a 27-year-old man were hit by the gunfire.

The 27-year-old victim died from his injuries.

Jones-Hill was denied bond at arraignment Tuesday and will remain at Wayne County Jail. He's due in Detroit's 36th District Court for a probable cause conference April 3, and a preliminary examination April 8, both before Judge William McConico.

He has petitioned for a court-appointed attorney.

In May 2016, Felix-Hill was discharged from prison after serving two years for carrying a concealed weapon, owing to a plea deal he took relating to a September 2013 incident.

Felix-Hill had served nearly five years on a charge of attempting to carry a concealed weapon.