Detroit to use ground-penetrating radar to audit demo sites

Detroit to use ground-penetrating radar to audit demo sites 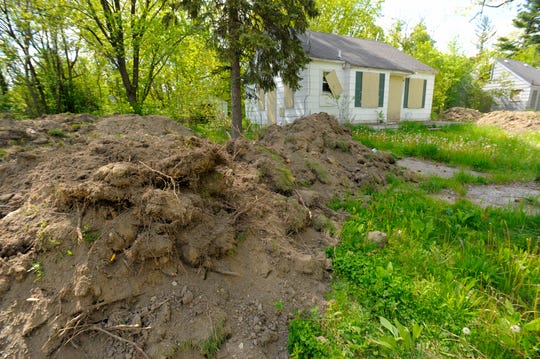 Fresh piled dirt is seen near a vacant home on Faust near Constance in Detroit after a demolition on May 18, 2016. (Photo: Steve Perez, The Detroit News)

Detroit — The city is deploying a new tool,  ground-penetrating radar equipment, to investigate the work of contractors under scrutiny over claims they haven't fully excavated debris at demolition sites.

The Detroit Building Authority and Detroit Land Bank Authority, which jointly oversee the city's federally funded demolition program, said Sunday they have developed a new protocol in partnership with the state Department of Environmental Quality that would use the new testing for several suspected breaches of contract.

It's expected to begin as soon as this week for two demolition contractors — Detroit-based Gayanga Co., and Blue Star in Warren — that were issued stop-work orders just over a week ago on claims they failed to clear out basements and other debris at multiple sites. A third contractor, McDonagh Demolition out of Chicago, officially was ejected from the program on Sunday after program officials concluded that the contractor had left debris in holes and added fill dirt on top. It will also be subject to an audit.

"It's unfortunate that we find ourselves here," Saskia Thompson, executive director of the land bank, told The Detroit News on Sunday. "I would love to say there will be no issues in the field. That's obviously an unrealistic expectation. All we can do is manage the information we have in front of us."

The new practices detailed Sunday come amid a number of high-profile contractor violations in recent months and growing concern among city, state and congressional lawmakers over record-keeping methods for potentially contaminated dirt used in the program.

The company, Great Lakes Ground Penetrating Radar, is initially being brought in to audit the sites completed by the three firms as a pilot, Farkas said.

The exact amount of sites audited for each contractor, Farkas said, will be based on a calculation tied to the amount each has backfilled within the last 12 months.

The auditing costs, he said, will be borne by the contractors.

"We've got a crew on standby and will be starting this week with some sample sites to see how the readings are," Farkas said, adding  that the findings will be shared with the Michigan Department of Environmental Quality. "We want to know one way or the other."

Farkas said he's not aware of where else this type of auditing has been conducted. A spokesman with the MDEQ could not immediately be reached Sunday for comment.

The lawyer representing Blue Star did not have an immediate comment.

The Detroit News reported earlier this month that Gayanga was under review on claims it failed to fully excavate a half-dozen sites.

In a statement released Monday, the company said it was "baffled" by the statement's made by program officials.

Gayanga noted that all of the sites in question received open hole approval from the city's Buildings, Safety Engineering and Environmental Department "prior to our own internal discovery of small pieces of concrete left at the sites."

Gayanga said the discovery was made during it's "rigorous" internal process of checking each site prior to beginning the backfill process. The company said it then self-reported the situation and notified its building authority field liaison. The liaison, they said, subsequently observed the removal of the concrete and a supervisory verified no additional concrete was found at the sites.

"We do not bid or participate in any of the federally funded Land Bank work and have not been awarded any contracts by the Land Bank since 2017," the company added. "We are baffled by the statements made by the Land Bank on our performed city-funded demolitions. We also were not notified of the audit prior to the publication of this story."

According to the building authority, Gayanga's last federally funded demolition was conducted in May 2018, within the past 12 months that the audit intends to review.

Rebecca Camargo, an attorney for Gayanga, noted Monday the firm had completed 32 of its 34 federally funded demolitions in 2017. Two weren't completed until May 2018 because the company was waiting for approvals from the building authority and land bank on change orders for asbestos not covered in the original site surveys.

Farkas said the new auditing practice show that program leaders have procedures in place "that are flagging this."

Site excavation rules, Thompson stressed, have always been in place and contractors "can't say, 'I didn't know that.'"

"In recent months, some contractors weren't living up to the terms of the agreement that they clearly knew were there," she said.

Thompson also has touted the annual release of funding for the blight elimination effort, which is more than $265 million over five Hardest Hit Fund rounds. The program has enabled the knockdown of about 11,000 structures with federal dollars, to date.

"We want to continue forward and will until all Hardest Hit Fund dollars are expended," she said. "I do believe that the demolition program has been part of an amazing transformation."

Farkas said the suspensions for Blue Star and Gayanga are expected to be lifted this week. The auditing and demolition production can take place concurrently, he said.

Meanwhile, program officials on Sunday said McDonagh is now discharged from the program after it spent time on suspension over claims it had not fully removed demolition debris at several sites before adding fill dirt.

Farkas has said that the "attempted scheme" was going to cost the company about $17 million in contracts.

McDonagh has called the violation an "isolated issue" and said it was taking steps to correct it.

In a provided statement, the company said it became aware of alleged issues related to a "limited number of McDonagh work sites" and "launched an internal investigation with the assistance of outside legal counsel."

"The findings uncovered evidence that individuals acted on their own, without the knowledge, authorization or consent of McDonagh ownership or management," the statement reads. "The evidence uncovered in no way reflects the integrity, values and operating practices of our company."

Thompson said Sunday that the contractor had left debris — basements, walls and footing — in holes and added fill dirt on top.

Since that time, she said, there was an investigation and plan proposed to correct the contract violations. The company, she said, was not moving quickly enough to implement its remediation plan.

"As of today, we have completely canceled their contracts," she said Sunday. "As of today, McDonagh cannot do any further work."

Farkas first said the catch was made by building authority liaisons. But it was later determined that a former McDonagh employee had acted as a whistle-blower.

Council President Pro Tem Mary Sheffield has called for congressional hearings to be held on the city's demolition program and previously cited the McDonagh case as a "clear example" that "protocols are not sufficient."

Reached Sunday, Sheffield said she had not yet been briefed on the planned audits and didn't have an immediate comment.

Under the program, the land bank manages the selection and contract awards for demolitions. Oversight then is transferred to the building authority, which has seven field liaisons who monitor the knockdowns. That's up from two when the program first began.

In February, another contractor, DMC Consultants, began filling holes with dirt that had not been approved for use under the program rules. An online platform that tracks dirt used at Detroit demolition sites tipped off officials that the company had exhausted it's supply of approved fill dirt.

Farkas said soil sampling is taking place for 37 holes that DMC filled with dirt that had not been approved. The testing is expected to determine whether the soil is unsafe for residential use. As of Sunday, the results were still pending, he said.