Driver charged in assault after car crash in Detroit

Driver charged in assault after car crash in Detroit 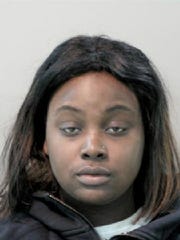 Laticqua Kinney has been charged with assault with intent to do great bodily harm less than murder, aggravated assault and failure to stop at the scene of an accident. (Photo: Detroit Police Department)

A 20-year-old Detroit woman has been charged in connection with assaulting a driver after a car crash last week.

The victim was driving south on Linwood near West Boston at about 6:50 p.m. March 20 when Laticqua Larae Kinney allegedly pulled in front of her and caused a collision, the Wayne County Prosecutor's Office said in a statement.

After the victim pulled into a gas station parking lot nearby, Kinney
stopped and walked over, but "a verbal argument began and escalated into a physical altercation," according to the release.

Two passengers from Kinney's car allegedly joined the scuffle and "struck, beat and stomped the victim and fled the scene before Detroit Police and EMS arrived," authorities wrote.

Medics took the motorist to a hospital for treatment.

Kinney was arraigned Wednesday in 36th District Court on charges of assault with Intent to do great bodily harm less than murder, aggravated assault and failure to stop at an accident scene.

Bond was set at $25,000. A probable-cause conference is scheduled for 8:30 a.m. April 9. A preliminary examination is set for April 16 before 36th District Judge Ronald
Giles.