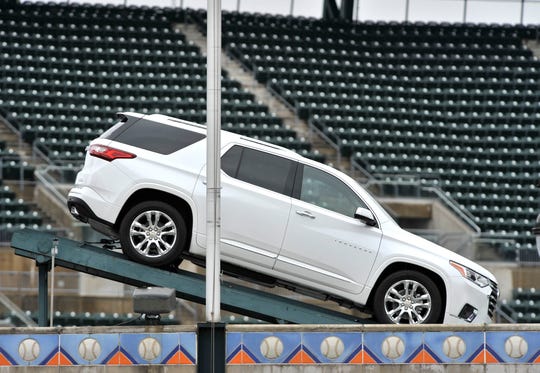 “We want people to enjoy baseball without distractions, so we have replaced the Chevrolet Blazer with a Chevrolet Traverse at the Comerica Park fountain," GM spokesman Jim Cain said. (Photo: Todd McInturf, The Detroit News)

The Chevrolet Blazer and the Chevrolet Silverado were installed at the Tigers' ballpark fountain briefly this week until controversy arose that the car wasn't American-made, GM officials said.

GM spokesman Jim Cain said WXYZ (Channel 7) published an online poll asking if viewers stood with the Chevy Blazer being placed on display despite being built in Mexico.

Cain defended the Detroit automaker's choice saying “American workers contribute more to the Chevy Blazer than anyone else," but said it was an easy decision to remove the vehicle.

“We want people to enjoy baseball without distractions, so we have replaced the Chevrolet Blazer with a Chevrolet Traverse at the Comerica Park fountain," Cain said.

He said the negative attention took away from the company's mission.

"American workers contribute significantly to the success of the Chevrolet Blazer," he said. "The Blazer will pump more than half a billion dollars into the U.S. manufacturing economy each year, helping support thousands of good-paying U.S. jobs."

►More: Blazer shows up at right time for Chevrolet

The 2019 Blazer, a two-row crossover, is being made at GM's plant in Ramos, Mexico.

Last June, a GM spokeswoman said that when the decision was made on where to manufacture the Blazer, the facilities in the U.S. capable of building a midsize SUV were running three shifts and were at full capacity.

The United Auto Workers were distraught by the decision to manufacture in Mexico saying it was "disappointing to UAW families and communities across the country."

UAW spokesman Brian Rothenberg said they were notified by GM Saturday after the removal and had no further comment.