'We're not waiting for a developer to come,' said Daniel A. Washington, founder of NW Goldberg Cares, which will be creating a tulip garden. 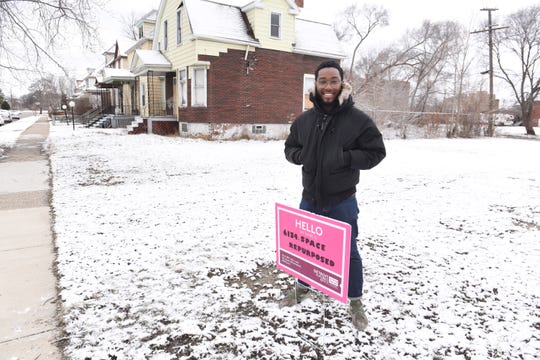 Detroit — Today, a grass field on 15th Street, on Detroit's west side, is snow-covered but otherwise bare, marked only by a pink sign hinting things soon will be different.

This time next year, weather permitting, tulips will begin their spring bloom, to be followed in the summer by lavender.

Bees will buzz on the far east end of the lot, just close enough to be accessible by anyone interested, but not so close as to scare off anyone. Books will fill a small library. Children will gather for story time.

That lot transformation will come courtesy of NW Goldberg Cares, a nonprofit granted $9,000 by Detroit Future City to build a tulip garden and bring programs to a space that's sat empty since the home on the lot was demolished about three years ago. The NW is short for "northwest." 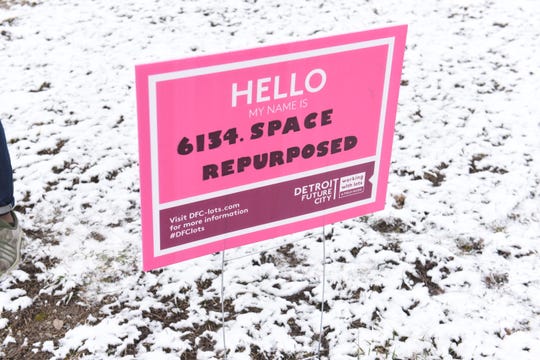 Today, a grass field on 15th Street, on Detroit's west side, is snow-covered but otherwise bare, punctuated only by a pink sign that augurs things will soon be different. (Photo: Max Ortiz, The Detroit News)

Daniel A. Washington, 25, founder of the nonprofit, acquired the land after it went empty, and has maintained it since.

"There were really high weeds," Washington said. "The city of Detroit just wasn’t cutting it. I really felt it was very important to show that when you have a house removed, you have to tend to it, even if it is publicly owned."

The project on 15th Street is the first one in the Northwest Goldberg neighborhood, said Sarah Hayosh, Detroit Future City's director of land use and sustainability. Washington defined the area as bounded by West Grand Boulevard, the John C. Lodge Freeway, Interstate 94 and Interstate 96.

He doesn't see the lot as empty space but as the "beacon of hope" it could be, after money, technical assistance and elbow grease come together over the next year to transform the space.

Come April, volunteers will get to work.

"We have to strip the ground of the grass to make sure we have enough growable patches of land to be able to put the plants in the ground," Washington said. "We’ll be doing some blight removal and installing a nice privacy fence here so kids can play in the summertime. In the next month you’ll see 20 to 150 people out here working, preparing the ground."

The tulips are expected to be planted in September. The lot's new name: "6134. SPACE REPURPOSED."

Daniel A. Washington, founder, NW Goldberg Cares, speaks about the transformation of an empty lot in Detroit The Detroit News

NW Goldberg Cares was one of nine groups granted a total of $97,000 in March for Detroit Future City's Working With Lots program.

Over the four years Working With Lots has been around, some 42 groups have been granted a total of $330,550, said Sarah Hayosh, Detroit Future City's director of land use and sustainability. The Working With Lots program is funded by the Erb Family Foundation and the Kresge Foundation.

Prior to the grant program, Detroit Future City published "The Field Guide to Working With Lots" as a how-to tool to teach different lot designs for Detroit's 23 square miles of open space, which consists mostly of small lots like the one on 15th Street.

The guide helped, but Hayosh said Detroit Future City "saw the need to provide more technical resources and funding to actually help community groups implement the project," which led to the grant program. Some 67 lots have, or will be, transformed in the years since, Hayosh said.

"They had a really strong plan for how they could promote or market this lot design and get people to come visit it during the high blooming season," Hayosh said of the lot on 15th Street.

This year's grantees will implement lot designs that hadn't been attempted in Detroit. The project on 15th Street will use the Holland Maze design, which is "a really fancy name for a tulip garden," Washington said.

Included will be a rain garden, a mini-library and the space for bees from Detroit Hives. Sometime during the week, when it's up and running, there will be storytime activities for neighborhood children.

Washington sees the neighborhood he grew up in, Northwest Goldberg, the home of the Motown Museum, as surprisingly overlooked, given its proximity to downtown. The media, he said, often identify the good in the area as belonging to New Center, while trash pick-up is spotty. He created NW Goldberg Cares, a nonprofit formerly known as Original Creativity, in late 2017 to tell his neighborhood's story and to lead a conversation on productive land use.

When he was 18, Washington and his older sister bought a home on 15th Street. He hopes repurposing the 6134 lot, a few doors down, along with the planned creation of an art park on a different block in the neighborhood, will not only improve the quality of life for residents, but possibly attract new ones.