The lawsuit seeks an overhaul of the cash bail system that, the ACLU says, is unconstitutional and discriminates against poor people 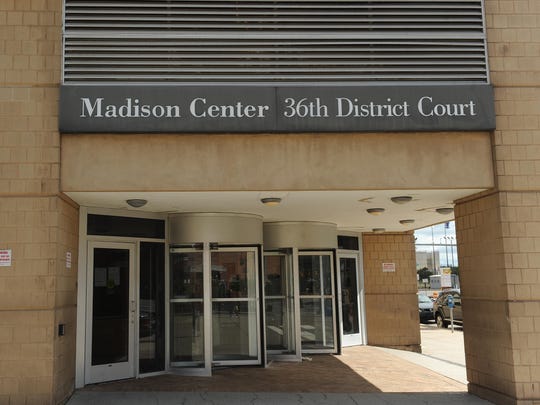 Detroit — The American Civil Liberties Union of Michigan filed a lawsuit Sunday against magistrates who preside over arraignments, claiming a "broken bail system" is punitive toward the poor and minorities at Detroit's 36th District Court.

The lawsuit seeks an overhaul of the cash bail system it says is unconstitutional and discriminates against poor people "by locking them up because they cannot afford to pay while allowing those who have money to go free."

The ACLU and law firm Covington & Burling LLP filed the federal class-action lawsuit on behalf of seven plaintiffs in U.S. District Court. Lawyers are urging the court to order systemic reforms to Detroit’s pretrial bail system ahead of the new $533 million jail complex in the works for Wayne County.

“A person’s freedom should not depend on how much money they have,” said Dan Korobkin, ACLU of Michigan's deputy legal director. “Bail was originally intended to ensure a person returns to court to face charges against them. But instead, the money bail system has morphed into mass incarceration of the poor. It punishes people not for what they’ve done but because of what they don’t have.”

The lawsuit follows the ACLU's national Smart Justice campaign, which aims to eliminate racism in the criminal legal system and cut incarceration in half. It also follows a move by lawmakers who proposed changes to Michigan's cash bail system in March.

The bipartisan legislation proposed in the House and Senate would allow more people accused of crimes to be released on their own recognizance before trial rather than have to pay. Judges could still set bail if they determine defendants pose an undue danger or there are significant risks of them failing to appear in court. However, it would prohibit judges from basing cash bail on pre-established amounts.

Among those backing the bills is Democratic Attorney General Dana Nessel, who said she represented many clients who were incarcerated because of an inability to make bond even though they faced minor charges for which they would be sentenced to probation — not time behind bars. Others, she said, pleaded guilty to crimes they did not commit so they could get out of jail and return to their families and jobs.

"When you keep people locked up for really no other reason than being poor, you're not helping society," Nessel said in March. "It actually increases recidivism rates, and it costs a lot of money to the state."

A spokeswoman for Nessel said Sunday that Nessel hasn't seen the lawsuit and was not in a position to comment on it.

The ACLU lawsuit also claims violations of the right to counsel because poor people accused of crimes are not provided attorneys to represent them when bail is being set.

" ... Absent extraordinary circumstances, no court appointed attorney is provided for arrestees at the arraignment, and the overwhelming majority of arrestees appear at
arraignment without counsel," the lawsuit says.

Detroit’s poverty rate in 2017 showed 34.5% of the population was living below the federally determined poverty line and median household income was around $30,000, below half of the nationwide median household income. The Federal Reserve reported in March that approximately 40% of adults in the U.S. are unable to pay a $400 emergency expense.

Defendants in the lawsuit include the court's chief judge, Nancy M. Blount, and the five magistrates who set bail at arraignments. Wayne County Sheriff Benny Napoleon is also named in the lawsuit for overseeing jails where people who can't afford bond are detained.  The courts could not be reached for comment on the lawsuit while offices were closed Sunday.

The ACLU is aiming for a resolution that narrowly limits who can be jailed before conviction, eliminates wealth-based discrimination, speeds up detention hearings within 24 hours of an arrest and eliminates pretrial profiteering.

"No one should make a living on the backs of people being churned through the criminal legal system," the ACLU said. "We must completely abolish for-profit bail and for-profit pretrial supervision. "

Detroit defense attorney Kevin Bessant said he’s represented clients who have been stuck sitting in jail for minor offenses because they couldn’t pay a $500 bond. He said he, too, considers the cash bail system a broken system.

“The issue is whether they’re a flight risk or a safety risk,” he said. “Oftentimes they’re not.”

He said sometimes people are picked up for a warrant they don’t know about.

“It might be a traffic warrant, something minimal,” he said. “Most people who are getting arraigned aren’t there for first-degree murder. They’re there for minor crimes … The problem is they’re picked up on a warrant and taken to the Detroit Detention Center. They’re arraigned. They don’t have a means to contact their family or their lawyer to say, ‘Hey, I’m in jail. I’ll be out in a couple days.’

"The employer is almost forced to fire them because they haven’t heard from them in two or three days. They’re just sitting up in jail trying to post a bond.”

One of the cases the ACLU put forth includes Jessica Preston, who was held in Macomb County Jail on $10,000 bond for driving on a suspended license in 2016.

Preston says she was ignored by staff when she went into labor and pleaded to be hospitalized. Preston delivered her son, Elijah, on a filthy cell floor in Mount Clemens.

Preston filed a federal lawsuit in July stating her 14th Amendment rights to humane treatment were violated. An admitted heroin addict at the time of her delivery, Preston had a history of drug arrests and outstanding warrants for failure to appear in court.

The ACLU is arguing, if she were rich, Preston would have been allowed to purchase her freedom while awaiting trial, but because she’s poor, her life was put at risk and her son has the Macomb County Jail listed as the place of his birth on his birth certificate.

"Keeping poor people locked up because they can’t afford bail is really no different than pay or stay," Perakis said in a statement. "It is the logical extension of the same legal theory, and it needs to be stopped." 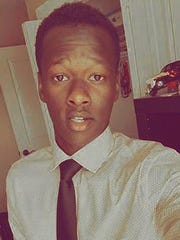 Cases from around the state have been addressed by the ACLU, including the Grand Rapids case of Djibril Niyomugabo.

The 17-year-old Rwandan refugee was arrested in 2016 after allegedly smashing a car window and breaking a bottle of pricey wine he had found inside. Unable to afford the $200 bail, Djibril sat behind bars for three days before committing suicide, hanging himself in his Kent County jail cell.

James Telman, a Grand Rapids attorney and friend of Niyomugabo, said there is no way justice is served by having someone who isn't a flight risk, accused of committing a non-violent crime, sit in jail simply because they are too poor to make bail. The way Telman sees it, the lack of $200 cost Niyomugabo his life.

“I knew him pretty well, and I think there’s no question he’d still be alive if he hadn’t been forced to stay in that jail cell for three days,” Telman said. “I think he was probably despondent and feeling like a screw-up. Given the circumstances, I don’t know that I’d be able to stand it if something like that happened to me at that age.”

Also mentioned is the case of Richard Griffin, who argues the few days he spent in jail threw his life into a downward spiral.

Griffin, 27, of Detroit was arrested in February for having a handgun in his car after being stopped by Detroit police outside what he later learned was a drug house, the ACLU said. Griffin says he's not a user, and was there as a favor picking up someone he knew needed a ride. Police checked his license and found an outstanding warrant for an unpaid $63 traffic ticket Griffin mistakenly thought had been paid years ago.

His bail was set at $850 and he does not have a criminal history. Griffin, who had been out of work since November, landed a job at a rental service and was supposed to begin work the day following his arrest. Without access to a phone, he was unable to call his employer, and the job was no longer there when he was released, he said.

Griffin had fallen behind on his rent and despite heading downhill so quickly, he says he feels relatively lucky.“I had people close to me who were willing to come up with the money and bail me out,” he said. "But when I was in jail, I saw people all around me who didn’t have anyone they could turn to. So, they had to stay locked up.” 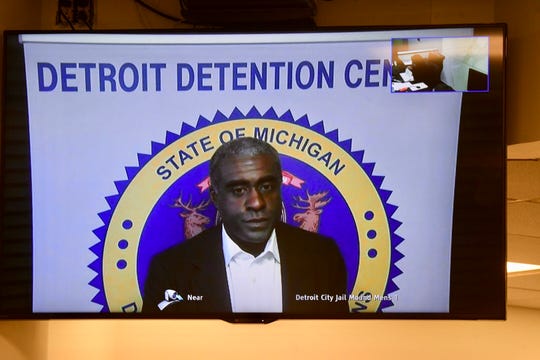 At 36th District Court, arraignments are conducted every weekday and a vast majority are conducted by video teleconference between the court and the Detroit Detention Center.

Detainees are gathered in a room by guards and before the arraignment begins, they are instructed, off camera, to enter a plea and only answer the judge's questions by yes or no, according to the ACLU.

During April 1–5, attorney court watchers observed every arraignment conducted at the 36th District Court. There were 252 arraignments of individuals who did not have attorneys.

"Not a single one of these individuals was asked whether they could afford to pay bail," the ACLU said.

The court watchers determined of 252 cases, some form of cash bail was imposed in 212 cases — 85% of the total.

"A typical arrestee spends approximately two to four minutes on camera; the vast majority is spent having information read to them," he said. "The money bail system has formed into mass incarceration of the poor because no questions being asked about who that person is individually and if they are truly an imminent danger to the community ... this is all happening when they're presumed innocent, too."

Korobkin said Michigan courts should follow methods they use in other states, in Washington, D.C., and in the federal system.

"Ninety percent of people in those states are released, not told they have to pay to get out and almost all come back for their hearings," he said. "The experience in other places shows us this system in Detroit is broken."

Almost all arrestees appear at arraignment without counsel, he said.

"About 95% of people charged cannot afford to hire a private attorney," he said. "We should never send someone to jail without an attorney to represent them, but we do it all the time with our pretrial cash bail system."

36th District Court, the lawsuit says, does not publicly disclose the percentage of defendants who are "ultimately assigned court-appointed counsel."

It costs approximately $165 per night to detain a person.

Twyla Carter, senior staff attorney with the ACLU’s Criminal Law Reform Project, said the system has created a long-standing problem in a city where the population is nearly 80% African American.

“In addition to being unconstitutional, this further impoverishes people who are already facing extraordinary challenges and enduring severe racial disparities in our criminal legal system," Carter said.

"That is why we are challenging bail systems like this across the country. They are dooming people who are presumed innocent but can’t afford their freedom. We will continue to challenge bail systems where prosecutors, judges, and law enforcement rely on an unfair and ineffective money bail system."