The fatal April 9 crash took place about 12:15 a.m. on Puritan at Lindsay, east of the Southfield Freeway 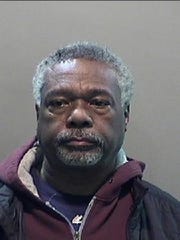 Detroit — A 60-year-old Detroit man has been charged in the fatal hit-and-run of a motorcyclist on Detroit's west side, authorities said Friday.

Malcom Lewis Davis has been charged with failure to stop at the scene of an accident, a five-year felony, according to the Wayne County Prosecutor's Office.

He was arraigned on the charge in 36th District Court and a magistrate ordered him held on a $10,000 bond, according to court records. The magistrate scheduled a probable cause conference for May 1 and a preliminary examination for May 7.

Police said the fatal crash happened around 12:15 a.m. April 9 on Puritan at Lindsay Street, which is east of the Southfield Freeway.

Officials said Davis was driving west on Puritan in a blue, older model Cadillac and allegedly disregarded a stop sign when the victim, Gerald Massey, 41, of Detroit, who was traveling north on Lindsay on a motorcycle, crashed into the car.

Davis is accused of fleeing the scene in his vehicle, according to the prosecutor's office.

Medics took the victim to a hospital, where he died from his injuries.