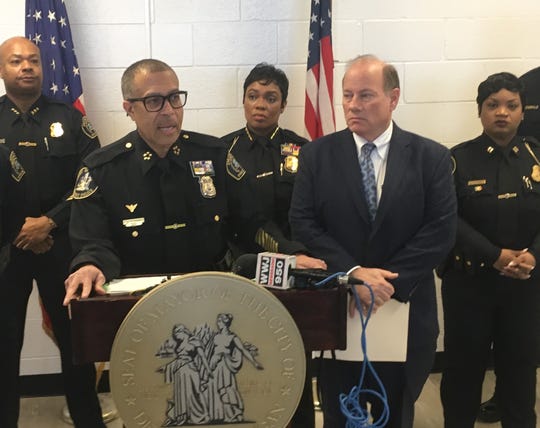 Detroit — The afternoon shift at the city's 6th Precinct was contaminated with racial animosity, while some supervisors were unaware or unconcerned about the rampant problems, according to an environmental audit discussed Wednesday by Detroit police officials.

"Many in the precinct became racially tone deaf, and it became ingrained in the culture — and some did not see anything wrong," Detroit police Chief James Craig said at a press conference at the 6th Precinct on Warwick on Detroit's northwest side.

The audit was the result of an investigation that ran parallel to an internal affairs investigation into two white former officers who were reportedly captured on a Snapchat video taunting a black motorist whose vehicle had been towed.

Former officers Gary Steele and Michael Garrison, both of whom worked for years at the northwest Detroit precinct, were fired for their alleged roles in the video, which showed a Jan. 29 traffic stop.

Steele and his partner Garrison allegedly are heard on the video mocking Ariel Moore, the woman they'd pulled over near Joy Road and Stout.

Garrison is allegedly heard on the video saying "walk of shame."

"The treatment of 23-year-old Ariel Moore was something that was deeply disturbing to everyone," Mayor Mike Duggan said at Wednesday's press briefing.

"Detroit police officers are sworn to protect our citizens, and it was sickening to watch Ms. Moore walking home in the cold while being mocked with racial comments," Duggan said. "It's just not acceptable."

Both Duggan and Craig stressed the problems involved only a small number of officers, and that they aren't reflective of the entire department.

Craig said he fired Steele and Garrison for conduct unbecoming an officer and lying to investigators during the internal affairs probe of the video.

As part of the fallout from the environmental audit, a white police captain retired, and another was demoted and removed from the 6th Precinct. Also, two officers with a high number of citizen complaints against them were ordered to undergo more training.

Craig said racial issues were found on other shifts at the 6th Precinct, but said most of the problems were confined to the afternoon shift, which was two-thirds white male officers.

Among the changes and issues announced Wednesday:

The audit found Steele and Garrison were the ringleaders of a small racist faction on the afternoon shift, who often referred to African Americans as "Keishas" and "Jakes," Craig said in previous press briefings.

A few hours after Wednesday's press conference, police officials released a 24-page executive summary of the audit. Craig said Wednesday he would release the full audit in response to Freedom of Information requests.

"Based on all of the information contained in this report, the Department concludes that the 6th Precinct is racially divided," the executive summary said. "Although this racial division does not appear to be widespread throughout the entire precinct, the amount of racial division exists at a level warranting further corrective measures."

The executive summary lays out the audit's methodology. Inspectors perused video footage from the body-worn cameras worn by Steele and Garrison from December 2018 and January 2019.

"There were a number of incidents that combined to form a concerning trend," the summary said.

"Furthermore, there were also several notable instances where one or both of the body worn cameras were turned off, though it is not entirely clear why," the summary said. "The concerning trends noted above occurred with great frequency.

"Regular review of body worn camera footage would have revealed much of this disturbing behavior," the summary said. "The fact that such reviews were not taking place (or worse yet, the conduct was simply ignored) represents a programmatic failure starting with the members’ immediate supervisors and ending with the command officers."

"We call on Chief Craig and Mayor Duggan to expand the Sixth Precinct audit to all precincts and Special Policing Units as well, so the public and administration can get a complete picture of what is going on within DPD," Reed said.

"We understand that the Sixth Precinct is being audited, the Coalition contends that this is just a start," Reed said. "In fact, we are where we are now precisely because we ignored key CORE findings about internal racism in DPD as well as reports by the officers themselves about mistreatment of citizens. Chief Craig dismissed the CORE findings as 'unverified rumors.'

"The Detroit Police Department must come clean and acknowledge that there are deeply embedded, long-standing issues of racism and abuse that must be addressed and rooted out in order for the people to have any level of trust in the Department's commitment to protecting and serving the citizens of Detroit," Reed said.

In response to Reed's comments, Craig told The Detroit News: "I started the CORE program in the first place, so why would I ignore something I initiated? We didn't dismiss their findings; we looked into them and found they were based on innuendo, not a proper investigation."

The CORE report is touched on in the audit's executive summary, which says: "the report lacked specificity and did not amount to a thorough and complete investigation on any particular matter."

During Wednesday's press conference, assistant police chief James White, who was in charge of the 24-person team that conducted the environmental audit, said a lot of the racially-charged conversations among officers were shrugged off as "shop talk."

"This notion of 'shop talk,' where you can engage in commentary that would be viewed as inflammatory, that's going to be stopped," White said.

"We've taken corrective measures that include a more diverse group of supervisors, and more diversity on Platoon 3," White said.

During the more than 100 interviews conducted during the audit, Craig said one statement by a white officer bothered him the most.

"When I asked whether he thought the supervisors were aware of the (racial problems), his response was, 'I don't know how they couldn't have known,'" Craig said.