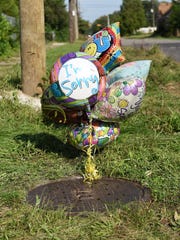 Balloons are tied to the manhole cover at the site where a body was found in a sewer near Chalfonte and Steel Streets in Detroit. (Photo: Robin Buckson, The Detroit News)

Detroit – A woman who says she suffered when she learned that her missing son was found slain in a Detroit sewer has failed to persuade the Michigan appeals court to reinstate her lawsuit over a Facebook post.

Brenda Burton sued Detroit and a water department employee who was accused of writing on Facebook that he had found a “dead body in the sewer” in September 2015. Burton says she went to the site and saw her son, Osean Lockett, under the manhole cover.

Burton says the water employee acted recklessly when he made the Facebook post before police could remove the body. She says she suffered emotional distress.

The appeals court says the post might have been “thoughtless” but it wasn’t “utterly intolerable in a civilized community.”

The ordeal to find Lockett had been difficult for the family, as reported in The Detroit News in 2015.

His mother had last seen him on July 6, when she dropped him off at a gas station in the vicinity of where his body eventually was found.

When they never heard from him, they spent weeks talking to friends and searching the area.

A neighbor within eyesight of the manhole saw a Facebook post from a sewage worker that said, "Went to wk this morning found a dead body in the sewer."

The neighbor, Alita Calloway, had already seen police at the scene an hour earlier, and assumed police found someone in the sewer. But they left, she said.

She then called a great aunt of Lockett and alerted her because she knew the family was looking for him.