Attorneys said Monday they discovered emails in a stack of evidence from prosecutors that indicate Carmack closed on parcel he later sold for $1M. 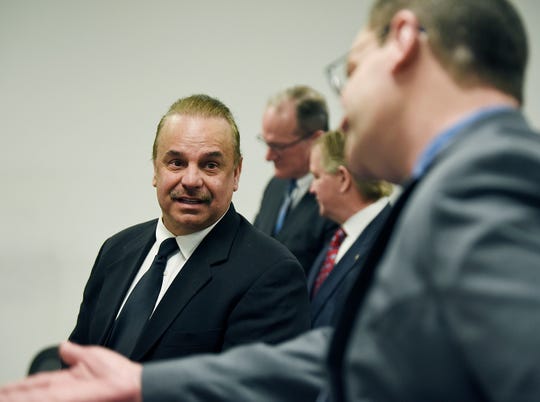 Attorneys for Robert Carmack said Monday in court they've found emails that show the Detroit businessman closed on the purchase of a disputed piece of property he later sold for $1 million.

Attorneys Lillian Diallo and Steve Haney said they found the messages among a voluminous amount of emails and texts between Chidi Nyeche, a former staffer of the city's planning and development department, and Bruce Goldman, an attorney for the city of Detroit who handles real estate matters, that show Carmack had closed on the site at 7751 Melville Street.

Haney added: "What they testified to was not accurate and they can explain that tomorrow and let the court be the trier of fact. What this does is it sets the stage for a very, very good case potentially at trial as well."

Goldman and Nyeche are scheduled to appear in court Tuesday to answer questions about the emails and their previous testimony.

Carmack's attorneys are expected to file a motion Tuesday to dismiss the case against Carmack, who is charged with four felonies in connection with the sale of the land to an Illinois real estate developer.

Authorities contend he never completed a $250,000 purchase of the 10-acre site but used draft documents from 2007 to fraudulently represent that he owned the land before selling it.

Haney said Monday he discovered the emails about a week ago as part of the prosecution's own discovery.

"Right in the middle of the preliminary examination we find this," Diallo said. "You can't rush justice."

She added: "These are documents you should have reviewed before. You do not wait until somebody is charged."

Diallo said the emails "substantiate" what Carmack was saying all along about owning the property.

The case in 36th District Court is being heard by Judge Cylenthia Miller. Carmack's preliminary examination has continued over about a dozen dates due to the nature of the case, the volume of documents and the number of witnesses.

On Tuesday, former city attorney Melvin Hollowell and Allen Hayner, who was worked in the city's real estate division as a project manager, are expected to be called as defense witnesses to discuss their recollections of land deals with Carmack, including his effort to buy a riverfront site in southwest Detroit.