Tax breaks sought for $40.9M renovation of ex-hotel next to arena

Tax breaks sought for $40.9M renovation of ex-hotel next to arena 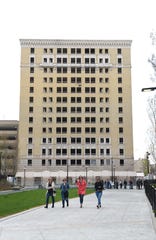 Renovation of the Ilitch-owned Hotel Eddystone next to Little Caesars Arena will cost $40.9 million. The still-unnamed developer of the residential and retail project will seek "governmental incentives" to pay for the construction. (Photo: Max Ortiz, The Detroit News)

Detroit — With rising criticism for delays on multiple developments around Little Caesars Arena, the Ilitch organization says it's ready to stick to a new deadline to renovate a vacant building a few yards away from sports and entertainment complex.

Patrons who use the northwest corner of the arena pass by the towering former Hotel Eddystone, a lifeless 13-story building near the Cass Avenue/Sproat Street part of the sports/entertainment complex. The Eddystone is one of an estimated two-dozen empty buildings owned or controlled by various entities linked to the Ilitch organization in the 50-block The District Detroit. That's the name of the Ilitch-driven plan to overhaul 50 blocks around the arena.

A least 1,000 new residential units have been promised in The District by Ilitch officials in the past few years, but, so far none of those plans have become reality.

On Wednesday afternoon, the board of Detroit's Downtown Development Authority, is expected to vote on a new arrangement that gives a new set of dates when the Eddystone will be worked on and how much the renovation will cost. The new target date to have the building occupied is more than two years away.

Renovation will cost $40.9 million, according to the new agreement with the DDA and the Ilitch's Olympia Development of Michigan. The still-unnamed developer of the residential and retail project will seek "governmental incentives" to pay for the construction, the document says. Olympia Development will provide a letter of credit or performance bond for $33 million to ensure the project meets specific milestones by certain dates and that the project is completed. The $33 million would be used if the developer defaults on the project.

The financing plan may change but the various deadlines for construction are much more firm, according to the document. The document lists a set 10 "milestone dates" with the first being in 15 days: applying for the city permits to temporarily cover the windows. The final milestone date is for complete renovation and ready for occupancy. That date is set for more than 25 months "from commencement of initial roof and masonry repair work." Roof and masonry work is expected to start sometime this summer.

The new arrangement is actually an amendment to the 2017 deal in which the Iltich group planned to have the building open by now.

In May 2017, the Eddystone was one of six buildings Ilitch officials declared would be part of the largest residential projects Detroit had seen in decades, creating 686 residential units. The Eddystone was among the four vacant buildings to be filled, along with the construction of two new buildings. The buildings should have been opened by now or well on the way to being renovated.

The 13-story Eddystone is to be transformed into about 100 rental apartments, 20% of which will be earmarked at affordable housing rates, Olympia Development stated Friday.

Kraemer Design Group will serve as the architect and O’Brien Construction Co. as the construction manager for the project, officials said.