Detroit weighs parking fine cuts, but only for residents

The preferential pricing plan is OK with the mayor, but has some legal analysts worried

Detroit weighs parking fine cuts, but only for residents 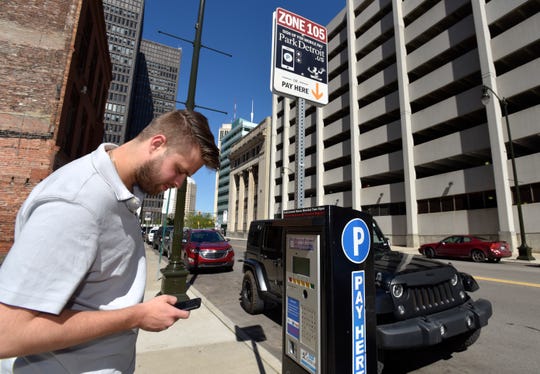 Gjon July, 25, pays for parking on his Park Detroit cellphone app on Lafayette near Shelby. He works in downtown Detroit but lives in Macomb, so he would not be eligible for a discount on parking meter violations for Detroit residents. (Photo: Todd McInturf, The Detroit News)

Detroit — The city might slash its steep parking ticket fines by half. But there's a catch. It would apply only to Detroit residents.

Detroit's City Council is considering a plan that would reduce $45 tickets for parking meter and no-parking-zone violations by 50% if city residents pay up within five days.

City officials say the proposal aims to improve fine collections and give a break to residents of a city where the poverty rate is around 40 percent. But legal observers warn the plan would create trouble for the city and open it up to litigation.

"It continues to be a barrier for Detroit residents, especially low-income residents needing to come downtown and transact business and partake in activities," Council President Pro Tem Mary Sheffield said. "This will provide some relief."

To qualify for the discount, drivers must reside in Detroit and their vehicles must be registered to addresses in approved Detroit ZIP codes. Residents with unpaid parking tickets won't be eligible, said Keith Hutchings, who heads the city's municipal parking department.

The proposal is expected to reduce the city's general fund revenue by about $73,000 annually, based on the five-day discount window. But to offset the loss, the parking department will reduce recurring contractual expenses by an equal amount, Detroit's finance chief wrote in a May 23 fiscal impact analysis.

The early payment for parking fines wouldn't be extended to individuals who work in Detroit and pay city taxes.

Hutchings said about 80% of the city's parking violations are issued to non-residents.

Last year, the administration provided figures to The Detroit News that showed only 30 percent of violators had license plates registered in Detroit.

Hutchings explained residency will be verified daily through a database cross-checked with the Secretary of State's Office. If it's determined an offender isn't a Detroit-registered driver, the ticket will go back on their record and they'll be responsible for the full fine. 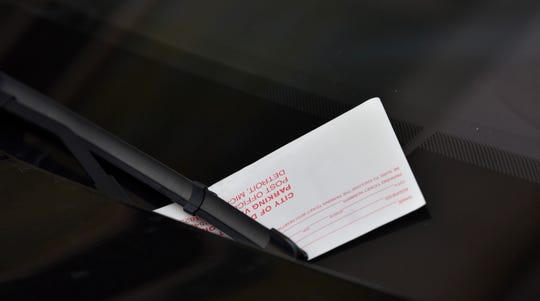 A parking ticket is slipped under the windshield wiper of a vehicle parked on Griswold near Fort on May 23. Detroit's City Council is proposing giving Detroit residents 50% off parking meter violations if they pay up within five days. (Photo: Todd McInturf, The Detroit News)

The collection rate for parking violations in 2018 was 74%, he said, and residents represent 20% of unpaid tickets. Officials expect about half of the typically unpaid residential tickets will be paid with the discount.

Gerald Fisher, an emeritus professor with Western Michigan University's Cooley Law School who has four decades of experience in municipal law, warns that "you can't treat outsiders and insiders differently on public streets. Especially if they are state highways or county roads."

"Personally, I think it's a terrible idea," he said. "The city has always wanted to attract people from out of the city in to spend money at restaurants, ball games and hockey games. So if you're essentially punishing those people, they are less likely to show up."

Fisher added a case could be made to apply the policy to city streets, funded with local tax dollars. But not others, such as state-funded Woodward Avenue.

"If communities start doing that all over the place, starting to treat their own residents favorably as compared to others, that's trouble," he said. "When public bodies start playing favorites, it's kind of divisive."

Detroit Corporation Counsel Lawrence Garcia said in a statement to The Detroit News that the city's law department reviewed the proposed ordinance and approved it in its current form.

"Council members will need to evaluate the risk of equal protection — and other potential challenges — when considering the matter," he said.

Mayor Mike Duggan is supportive of the plan, said Alexis Wiley, his chief of staff.

"It is not uncommon for cities across the country to give their residents preferential pricing when it comes to places like recreation centers and golf courses," Wiley said. "This is no different and we are in support of it."

The ordinance amendment, brought forward by Council President Brenda Jones and Sheffield, has been a subject of debate for years to bring down costly fines put in place amid Detroit's financial crisis.

Emergency Manager Kevyn Orr in 2015 approved a new rate schedule, increasing Detroit's parking fines for the first time in more than a decade.

The proposal is a compromise to a plan first drafted by Sheffield last fall that would have lowered tickets from $45 to $30 for expired meters. It also called for a 10-day grace period to reduce fines by 50 percent. 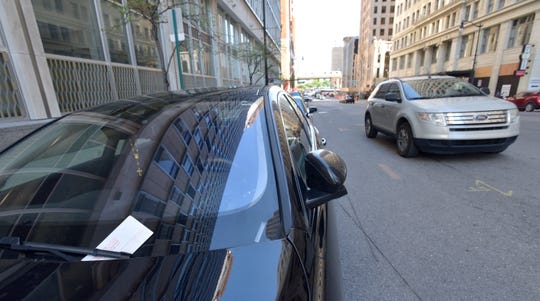 A parking ticket is tucked under the windshield wiper of a vehicle parked on Griswold near Fort in Detroit on May 23. (Photo: Todd McInturf, The Detroit News)

The Duggan administration, at the time, criticized the plan, saying it would cost the city $2 million in city revenue.

The effort is part of a legislative package coined the "People's Bills," a set of initiatives spearheaded by Sheffield aimed at addressing water rates, affordable housing and other human rights issues.

Sheffield said it was her hope to have the cost of tickets dramatically reduced. But she's pleased to move forward with a plan to aid residents. As for legal concerns, Sheffield noted the law department's review of the proposal, and that it was comfortable with it going forward.

A public hearing is set for June 24.

Detroit's parking rate hikes were the subject of a 2017 class-action lawsuit that argued the fines and fees were "excessive" and violating the constitutional rights of motorists. The case was dismissed in March.

Harriet Evans has lived in Detroit for about 40 years and has been ticketed at parking meters since the violation rates went up. She believes a discount should be reinstated, but it should be extended to all.

"It should be one rate only," Evans said after feeding a meter Friday evening on Lafayette. "It shouldn't be separate just because you aren't a resident of Detroit."

Sheffield said she’s in favor of a discount on early ticket payment for all but said there hasn’t been support from colleagues on the council or the administration for that plan.

She just wants those who are offending to be held accountable.

"I am trying to make law based on those who do good, not bad," she said.

Jason Glei, vice president of marketing and information technology for the National Parking Association in Washington D.C., said parking enforcement policies vary greatly across the country depending on who oversees enforcement and how it's being carried out.

"It's not something we as an organization know as being 'commonplace,'" he said. "That doesn't mean other municipalities don't have it in operation. They very well may."

Jones has said a resident discount is similar to others offered elsewhere. She did not respond to requests for an interview on the proposal.

During a subcommittee session in May, she said the plan will give Detroiters "incentive to go on and pay their fines if they weren't paying it."

Garcia said other municipalities offer their residents preferential discounts on parking, such as the discounted rate for on- and off-street parking meters and garages for residents of Miami Beach, Florida.

Many cities discount tickets if they are paid early, but it's not typically offered exclusively to residents of that community, said Donald Shoup, an urban planning professor for UCLA.

"It'd be a first," he said. "It's always nice to have a city do something first and you see what happens."

Councilman Scott Benson, who chairs the council's Public Health and Safety Standing Committee, said he is in favor of the amendment and voted to move the measure along.

"I support having the privilege for residents," Benson said during the May 20 session. "Residency should have its privileges."