Police believe a serial killer and rapist responsible for the slayings of three women is on the loose on the city's east side. 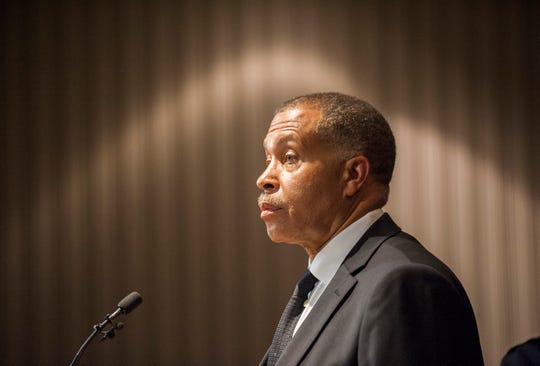 Detroit police chief James Craig says officers are looking for a suspected serial killer believed to be responsible for the slayings of three women on the city's east side. (Photo: John T. Greilick, The Detroit News)

Detroit — A serial killer who targets prostitutes may be on the loose on the city’s east side, Detroit police officials said Wednesday.

Since March, three female homicide victims, all of them sex workers whose bodies were found in various stages of decomposition, have been discovered inside vacant houses on Detroit’s east side, police chief James Craig said.

Craig added there are other connections between the cases, which he didn't want to release to the public yet.

"We believe this is a serial murderer and rapist, and we want to alert all sex workers — particularly those who work inside vacant houses — to beware," Craig said.

The most recent victim was discovered Wednesday morning in a vacant house in the 3000 block of Mack. Other victims were found May 24 and March 19; one was white and one was black; their ages were 52 and 53.

Investigators were unable to determine the age and race of the victim discovered Wednesday because her body was badly decomposed, Craig said.

"The killer appears to be targeting a certain type of victim: Sex workers in their 50s inside vacant houses," Craig said. "We have no suspect description, and no witnesses — but we believe some women may have had contact with this suspect, and we're asking for their help."

Police Commissioner Willie Burton, who represents District 5 on the city’s east side, said the killings exacerbate existing problems in that part of town.

“That area of Mack (where the woman’s body was discovered Wednesday) has a lot of crime already,” he said. “This is the latest tragedy to hit us on the east side.”

Burton said there’s an effort underway “to organize groups to go into abandoned buildings to see if there are more victims.”

Anyone with information is asked to call the Detroit Police Homicide Section at (313) 596-2260; or Crime Stoppers of Michigan at (800) SPEAK UP.

Through the years, several serial killers have targeted prostitutes in and around Detroit:

--In 2000, former U.S. Navy sailor John Armstrong strangled five sex workers in Detroit. He claimed he’d also killed women in ports across the world, although he later recanted that. He pleaded guilty to second-degree murder and received two life sentences.

--Benjamin Atkins, known as the Woodward Corridor killer, raped and strangled 11 women in Detroit and Highland Park, some of them sex workers, during a nine-month stretch in 1991 and 1992. The FBI said Atkins killed more people in the shortest amount of time than anyone else in U.S. history. He was sentenced to 11 life terms in prison, and died in 1997.

--Donald Murphy confessed to killing six prostitutes in Detroit in 1980. His confession was complicated by the fact that former high school basketball coach David Payton had earlier confessed to some of the same killings. Murphy was convicted of two of the murders and was sentenced to life in prison. Payton successfully sued the city for $8 million after a jury found his confession was coerced by police.

--In 1975, a hulking man with large feet, known as “Bigfoot,” raped and killed seven prostitutes in the Cass Corridor. The killings remain unsolved.

Alex Andrews, a board member of the Sex Workers Outreach Project USA, a Walnut, California-based organization with has chapters throughout the country, said sex workers are vulnerable to violence for several reasons.

“Serial killers prey on sex workers because they are often part of marginalized populations,” Andrews said. “They often don’t report violence against them, and the reason is twofold. One, police won’t believe them; and secondly, it’s unlikely that the crime will be investigated because police consider sex workers to be disposable.”

Craig insisted he’s taking the killings seriously, no matter what the victims did for a living.

“These are somebody’s daughters,” he said.

Anyone with information is asked to call the Detroit Police Homicide Section at (313) 596-2260; or Crime Stoppers of Michigan at (800) SPEAK UP.