“Detroit Pride was the first one I ever went to and always wanted to come back for the community,” said Kortlyn Johnson of Warren 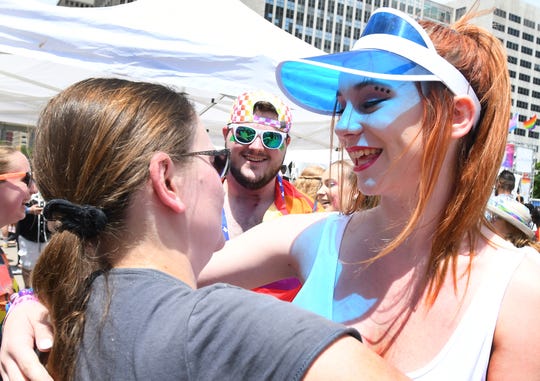 Detroit — Michigan residents were decked out in rainbow everything Saturday as the Motor City Pride festival kicked off a weekend-long celebration in downtown’s Hart Plaza.

Organizers said a crowd of 25,000 is expected for the event, billed as the largest pride celebration in Michigan.

A diverse group of attendees lined up to enter the party along the riverfront and among them were groups of teens, adults and many parents who chose to bring their children.

Beth McConnel from Lansing said she brought her twin 5-year-olds to their first pride festival because she wanted to introduce them to the welcoming LGBTQ community in Detroit before attending pride events in Lansing and Grand Rapids next week.

McConnel said the twins were both born female, "but we know soon that one of them will tell us they would like to change their pronoun. ... She’s been telling me for years she’s a boy and if she’s going to change her pronouns, I’m just following her lead.” 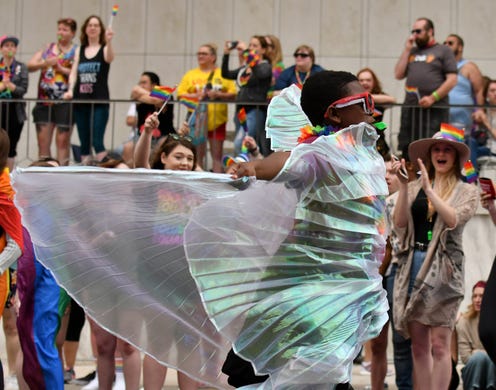 Hamza Archer 11, of Ypsilanti walks with the Pride Alliance group in the Motor City Pride Parade on Griswold Street in Detroit on June 9, 2019. Robin Buckson, The Detroit News
Fullscreen 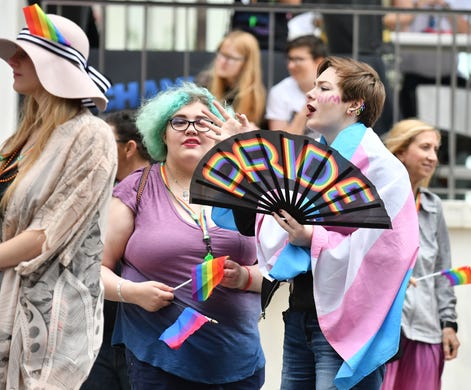 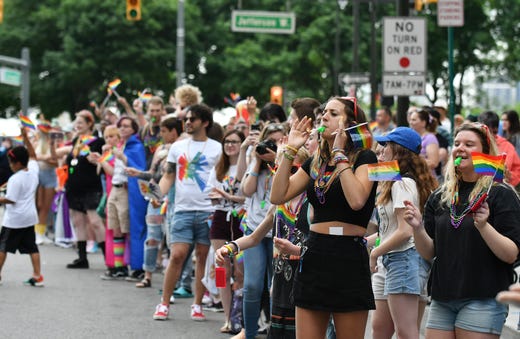 People blow whistles and cheer for the participants in the parade. Robin Buckson, The Detroit News
Fullscreen 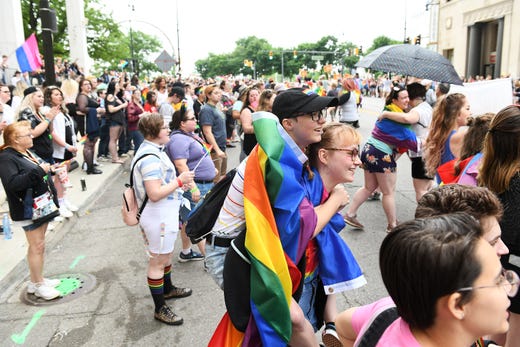 Allen Cooney, 17, on the back of Chloe Chamberlain, 15, both of Durand, watch the parade. Robin Buckson, The Detroit News
Fullscreen 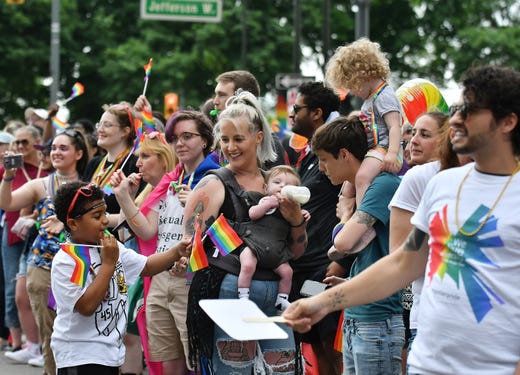 From left, James Shavers, 8, passes a flag to his mom, Allison Gressman, 30, of Warren holding five-month-old Atlas Dunne with Allyssa Palmer, 28, of Taylor with Charlotte Dunne, 1, on her shoulders at the parade. Robin Buckson, The Detroit News
Fullscreen 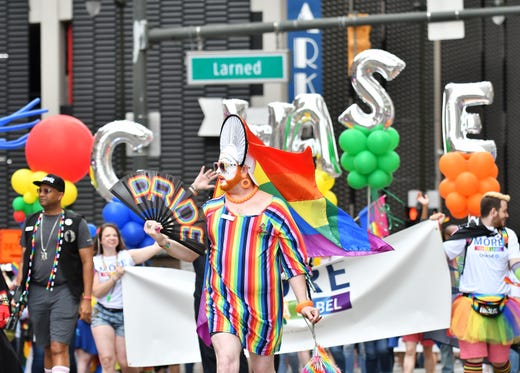 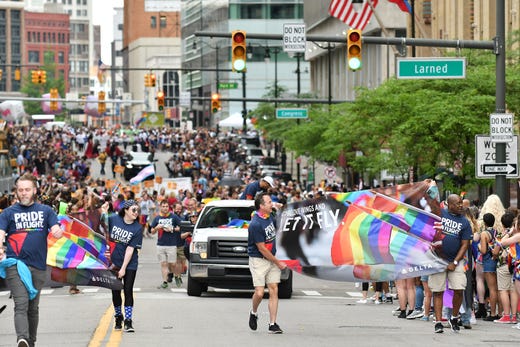 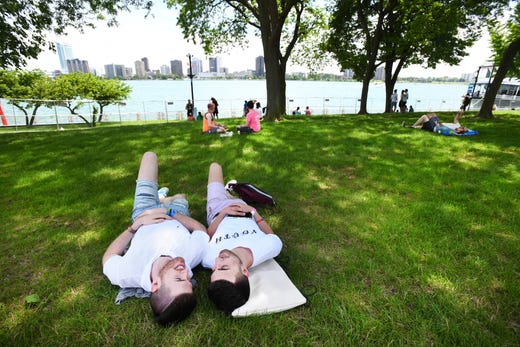 Claudio Martini and Sam Shehedeh relax in the shade along the Detroit River during the Motor City Pride festival in Hart Plaza in Detroit, Michigan on Saturday, June 8, 2019. Daniel Mears, Detroit News
Fullscreen 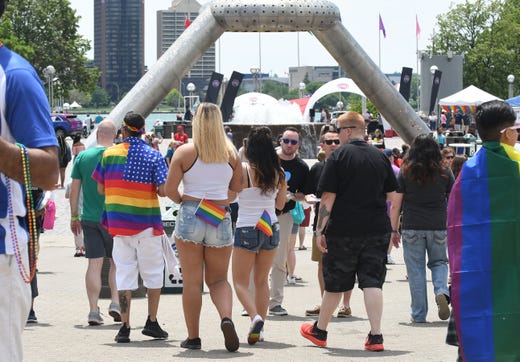 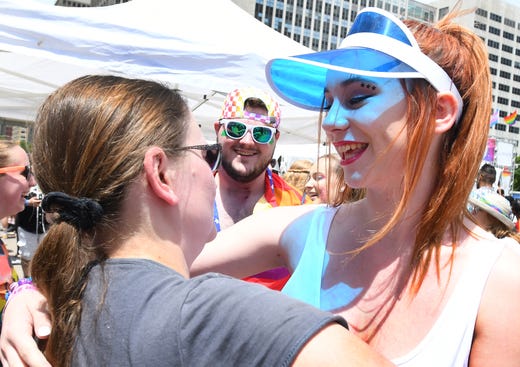 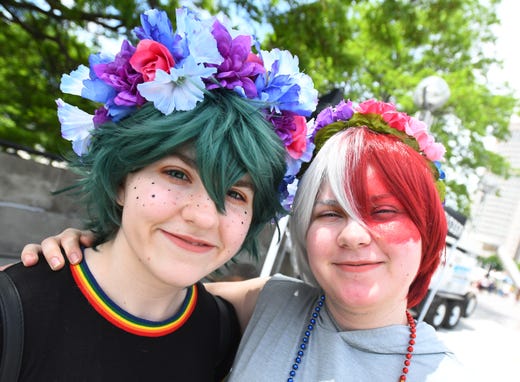 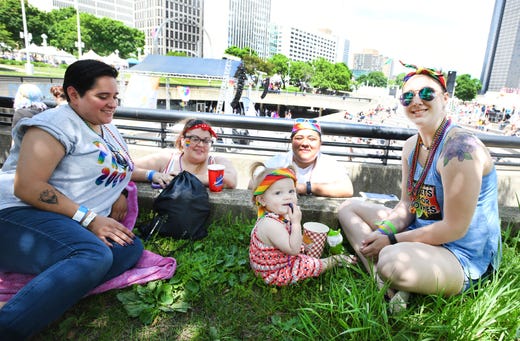 A rainbow caped figure makes his way through the crowd at the Motor City Pride festival in Hart Plaza in Detroit. Daniel Mears, Detroit News
Fullscreen 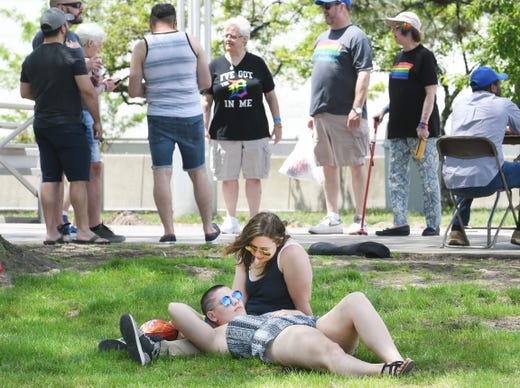 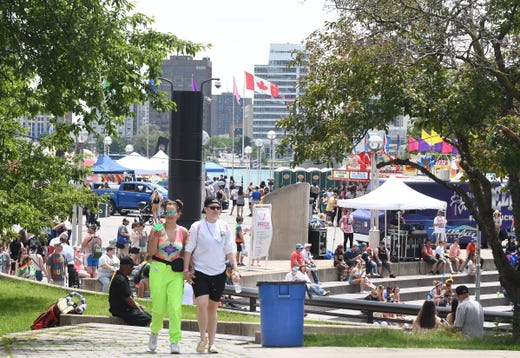 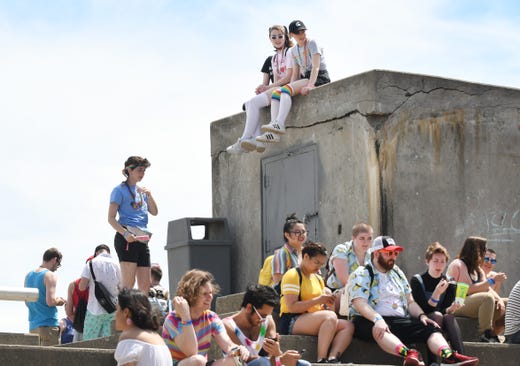 The crowd enjoys the sun and some live music at the Motor City Pride festival in Hart Plaza. Daniel Mears, Detroit News
Fullscreen 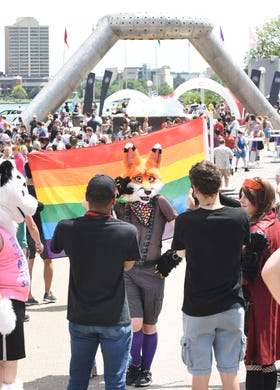 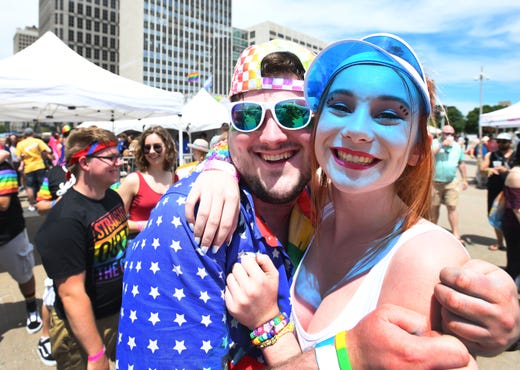 Alex Rogosch and Jessie Miller are all smiles as they arrive at the Motor City Pride festival. Daniel Mears, Detroit News
Fullscreen

Kortlyn Johnson of Warren attended her 10th PrideFest in the city sporting a sequenced rainbow two piece outfit with her girlfriend and extended family.

“Detroit Pride was the first one I ever went to and always wanted to come back for the community,” said Johnson, 27.

Johnson said she was worried after hearing of recent killings in the city that targeted the LGBTQ community.

“There were warnings on Facebook of a Nazi group that might come and that just not right,” Johnson said. “We haven’t seen anything and hope we don’t. Any groups that oppose just need to let people be happy.”

The group of Nazi protesters did show up in the afternoon, with police working to keep the protesters and attendees apart as they marched through the festival.

The festival traces its roots back to June 1972 when the first march was held to protest homophobic laws and work for recognition and equality. After a few years, it expanded to include a picnic after the march and grew into a festival.

Since 2009, Motor City Pride has been headed up by a core group of Triangle Foundation volunteers that form the Motor City Pride Planning Committee. The organization became a nonprofit in 2017 expanding its work into victim services, education and policy work, officials said.

Destiney Vanassche from East Point said she was excited to attended the event for the first year with her friend Alissa Warrack.

“I’m here supporting my cousin and her girlfriend and we lucked out with nice weather,” said Vanassche, 19.

In honor of Pride month, the city of Detroit raised a rainbow flag in Spirit Plaza.

On Tuesday, Gov. Gretchen Whitmer said she wouldn’t rule out the possibility of a citizen-led ballot initiative to expand the state's Elliott-Larsen Civil Rights Act to include gays should legislative efforts to do the same be opposed by the GOP majority.

The festival runs until 9 p.m. Saturday at Hart Plaza in downton Detroit. It starts with a parade at noon Sunday and ends at 7 p.m. Admission is $5 (youth under 12 attend for free).

The festival's headliners include Alise King and DJ Nader on Saturday and Killer Flamingos and DJ Kevin Bailey on Sunday. See the full lineup online.