Police: Woman calls man out, stabs him fatally in street

Tiffany Reed, 33, was denied bond on a charge of first-degree premeditated murder, and will remain at Wayne County Jail as her case proceeds

Police: Woman calls man out, stabs him fatally in street

Detroit — A 33-year-old Detroit woman is charged with fatally stabbing a man during a violent weekend in Detroit that included at least three fatal shootings, court records show.

Tiffany Reed, 33, is charged with first-degree murder in the killing of a 33-year-old man, Jawan Burns. 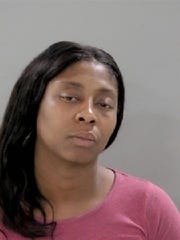 Police say that around 1:50 a.m. Saturday morning a woman showed up at a house on the 9900 block of Burns and asked the victim to step outside.

When the victim stepped outside, he was stabbed. Burns died of a stab wound to the chest, per the Wayne County Medical Examiner.

At her arraignment Tuesday at Detroit's 36th District Court before Magistrate Laura Echartea, Reed was denied bond, and will remain at Wayne County Jail.

Reed is due in court June 25 for a probable cause conference, and on July 2 for a preliminary examination, both before Judge Michael Wagner.