Wall built to separate whites, blacks in Detroit ‘an important story to tell’

The wall — known by many names including the Birwood Wall and the Eight Mile Wall — has been getting a lot of attention recently, more than 75 years after it was built.

Wall built to separate whites, blacks in Detroit ‘an important story to tell’

Teresa Moon, president of the 8 Mile Community Organization, talks about the Birwood Wall located at the Alfonso Wells Memorial Park in Detroit. The Detroit News

Detroit — Dwight Smith never thought much about the six-foot-high wall that snakes a half-mile through his northwest neighborhood near Eight Mile.

He became aware of it as a middle schooler in the 1950s, when classmates talked about which side they lived on. Later, he visited with neighbors whose homes included a stretch of the wall in their backyards.

But it wasn't until seven years ago — when Smith, 70, started exploring the history of his neighborhood, known as Garden Homes — that he learned why the wall was built in 1941: To separate black families living in the community from white residents expected to move in. 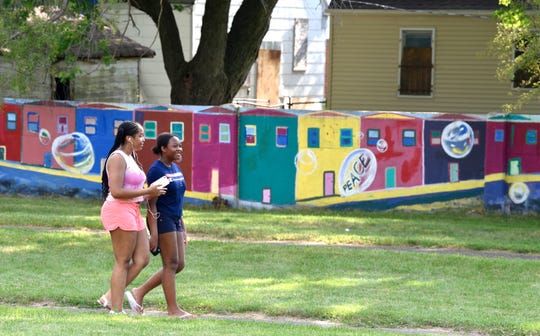 Tiavonni Freeman, left, 16, and her sister, Tyesha, 12, both of Detroit, stroll on the walking path at Alfonso Wells Memorial Park in front of the Birwood Wall, which some neighbors call 'the Detroit Wall.' The wall was built in 1941 as a way to separate black neighbors from white neighbors expected to move into the area. (Photo: Todd McInturf, The Detroit News)

"I never knew this," said Smith, president of the8 Mile Road Old Timers Club.  "And you got people today who live more than a block away from the wall, and they don't ever know why it's there. ...  I kept hearing so much about Black Bottom and Hastings, the areas in Detroit where they claimed all the blacks migrated to. But I never heard anything about the Garden Homes area. It's like this place never existed."

The wall — known by many names, including the Birwood Wall and the Eight Mile Wall — has been getting a lot of attention recently, more than 75 years after it was built. 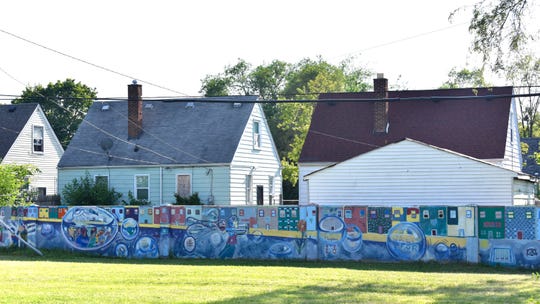 The Birwood Wall at Wells Park in Detroit was built in 1941 as a racial segregation barrier. Now city officials plan to conduct an intensive survey of the neighborhood to document missing the history of the area where the wall was built. (Photo: Todd McInturf, The Detroit News)

The Michigan State Historic Preservation Office is working to get the wall on the National Register of Historic Places and put a state historical marker at the site.

Meanwhile, the National Park Service last month awarded a $40,000 federal grant to the City of Detroit Historical Designation Advisory Board to document the Great Migration, when millions of African Americans migrated from the rural south to the urban north, and its impact on developing the neighborhood at Eight Mile and Wyoming.

City officials will conduct an intensive survey of the neighborhood to document  the history of the area where the wall was built. Many African Americans settled there and built homes when other Detroit neighborhoods became too crowded.

At the time, the neighborhood was primarily black, but a developer wanted to build a community nearby exclusively for white residents, Van Dusen wrote in his book. But banks were not issuing loans in majority-black neighborhoods, a practice known as redlining.

The Federal Housing Administration rejected the developer's plans because the neighborhood was defined as "hazardous," according to the book.

"The FHA was reluctant to insure bank loans on such properties because racially mixed areas, the agency reasoned, were likely to stir confrontation, lead to violence and jeopardize the fiscal soundness of the investment," Van Dusen wrote. 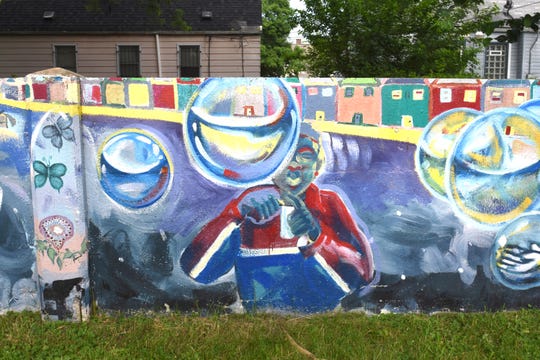 Local artists transformed the Birwood Wall a few years ago. Now a grant from the National Park Service awarded to the City of Detroit Historic Designation Advisory Board will help identify other historic properties and preserve them for the future. (Photo: Max Ortiz, The Detroit News)

To get a federally backed loan, the developer approached the FHA a second time and proposed building a six-feet high, one-foot thick wall, perpendicular to Eight Mile, with blacks living on the east side and the new "white" neighborhood to live on the west side. The FHA agreed to the compromise, Van Dusen wrote. It was built just south of Eight Mile to Pembroke Avenue, between Birwood and Mendota streets.

In an interview, Van Dusen said it surprised him and others that the community in the shadow of the wall  included residents in what is known today as Royal Oak Township as well as Detroit. It was one square mile of individuals and families who were related by blood and by other relationships and traversed both sides of Eight Mile.

"The Birwood Wall really attempted to block the Detroit east side of the wall and, as a symbol, Royal Oak Township," he said. "The community was bigger than just a few blocks east of the wall. But (it) was resilient in the face of the obstacles that were thrown up. The physical wall was just another insult. But it symbolized for them ... barriers they had been dealing with all of their lives."

Janese Chapman, deputy director of Detroit's Historic Designation Advisory Board, said the Birwood Wall is an important story to tell.

Fred White Jr. grew up in the neighborhood on Roselawn Street and remembers his parents taking him, his brother and his sister to watch as trucks poured the cement to create the wall.

At the time, White was 9 years old, and he remembers when the area was wooded. His dad hunted there for pheasants, squirrels and rabbits.

His parents explained to him and his siblings why the wall was built, but he didn't understand the magnitude.

'We didn't know anything about segregation at that time," said White, now 88. "They told us the wall was built to separate the whites from the blacks.  ... I didn't really have any thoughts about it. There weren't any demonstrations. They built the wall and that was it."

White later came to have a deeper understanding of the significance of the wall and remembers there were other incidents when blacks were discriminated against in the community. He specifically remembered seeing the Klu Klux Klan burn a cross on Greenlawn Street, one street beyond where he lived.

"Some people don't believe all of this happened on Eight Mile Road," White said. "People don't even know that Detroit was one of the racist cities."

Children stand in front of the half mile concrete wall in Detroit shortly after it was erected in 1941 to separate the black residents from a white housing development going up on the other side. (Photo: Library of Congress)

The Birwood Wall is a product of policies of the Federal Housing Administration that included redlined maps and discrimination against people of color, said Jeff Horner, a senior lecturer in the Urban Studies and Planning department at Wayne State University.

“We don’t have too many physical manifestations of segregation or separation of races,” Horner said. “There is a lot of that down South. I’m sure civil rights museums have separate drinking fountains and all. But there is not a lot of that in the North. I’m sure that’s why the Birwood Wall captures a lot of people’s imaginations.”

For most of its existence, the wall was gray. Then, about a decade ago, Detroit artist Chazz Miller — along with some volunteers in the neighborhood — painted murals along a stretch of the wall facing the Alfonso Wells Memorial Park.

The wall includes images of civil rights icons, such as Rose Parks and Harriet Tubman. It also includes many colorful houses to symbolize the reason the wall was built: Because "they didn't want colored people in the neighborhood," Miller said.

"You want to tell the story," said Miller, founder of the Artist Village Detroit in the Old Redford District. "You don’t want the story to die."

Teresa Moon, who lives across the street from the wall, is another resident who didn't understand the significance of the wall until she became a young adult. Growing up, she remembers when kids would walk atop the wall as part of their coming of age. 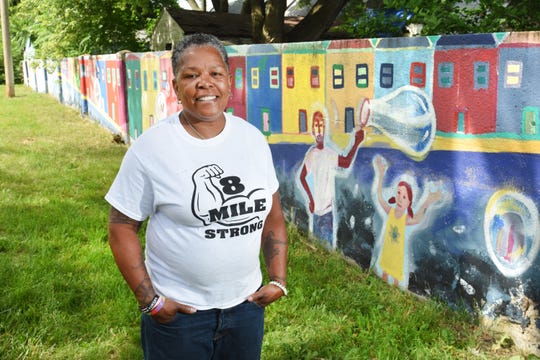 Teresa Moon, president of the 8 Mile Community Organization, lives across the street from the wall. Growing up, she remembers when it was a place where kids in the neighborhood would walk atop the wall as part of their coming of age. "The teachers never told us anything about the wall," she said. (Photo: Max Ortiz, The Detroit News)

"The teachers never told us anything about the wall," Moon said. "They never spoke about it ... I think they should have said something so we could have understood it better."

She had a faint understanding of segregation between whites and blacks because she never saw white people, except on television or when they were bused to her junior high school. Today, the neighborhood is still home mostly to African Americans.

Even though some of Moon's neighbors don't know about the wall and its significance, it is listed online as a travel destination, attracting tourists from around the world.

Moon often greets tourists wandering around the wall so she can tell them about the neighborhood. She has met people from France, Australia, Germany and Italy and also watched as kids from high schools in the metropolitan area show up to learn about the wall as part of their curriculum.

"It used to be kind of funny to me that people came to see the wall as a tourist attraction," Moon said. "For a while, I didn't understand it, but I understand now. People want this conversation started.

"This conversation is probably long overdue about the unjust, unfair way people are treated because of the color of their skin."