Commissioner Willie Burton was removed from a board meeting, arrested after being warned to stop interrupting the proceedings The Detroit News

Detroit — During a raucous Board of Police Commissioners meeting Thursday, officers removed a commissioner from the meeting as other cops held back an irate crowd.

The board went on to discuss a policy governing the use of facial recognition software, which officials say restricts using the technology to after-the-fact investigations of violent crimes, or when there's a credible threat of terrorism.

But police Chief James Craig last week asked the board to hold off on the vote so he could tweak a few things, board chair Lisa Carter said.

Dozens attended Thursday's meeting, which was held at the Durfee Information Center on Collingwood Street on the city’s west side. Some attendees wore masks to protest the use of the software, which they said opens the door for police abuse.

Shortly after the meeting commenced, Wayne Circuit Judge Craig Strong swore in Carter as the new board chair. Afterward, commissioner Willie Burton began asking what she would do differently than former chairman Willie Bell, with whom Burton had clashed several times.

“You are out of order,” Carter told Burton multiple times. When Burton continued talking, she asked officers to remove him from the room. Several officers surrounded Burton and placed him in handcuffs.

Angry audience members rushed toward the front of the room, and police officers formed a cordon around Burton as cops led him from the room amid shouts of "democracy!" and expletives.

It took about 20 minutes for things to calm down, and the board continued normal business, including reading resolutions aloud, and an update from the 10th Precinct.

“He was asked several times to be quiet, and I finally told him if he didn’t he would be arrested,” he said. “But he kept shouting. I think our officers showed great restraint tonight.” 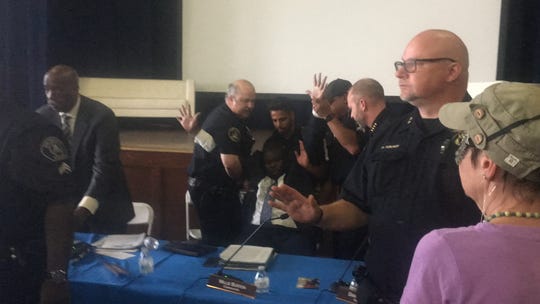 Carter said during the meeting that state Rep. Isaac Robinson, D-Detroit, introduced a House bill this week that would put a five-year moratorium on police departments in Michigan from using facial recognition software.

"This technology is nothing more than some type of system to lock up people of color," Blount said.

Resident Tawana Penny added: "The resistance to facial recognition technology is a bipartisan issue. The argument right now by the mayor and chief of police is that they won’t be using livestream video, but that they’ll only use still photos.

"However, racial bias issues were first detected using still photos," Penny said. "You say you represent Detroiters; don’t do this to Detroiters."

Scotty Boman, who wore a mask to protest police attempts to use the technology, called the mask "a low-tech solution to a high-tech problem that the board of police commissioners has helped to embolden. What we have now is a surveillance state in Detroit.

"The fact that it’s only to be used in criminal investigations only cites intent, not capability," Boman said. "It only takes one person to do something wrong."

Boman was among several people to complain that Burton had been removed from the meeting.

"The arrest of Mr. Burton, while he was speaking, because apparently what he said was not liked by the chair, is shameful," he said, calling the action "a civil war using a paramilitary organization."

After the meeting, Carter said she was forced to have Burton removed from the venue.

"Everyone has a right to speak, but you can't just be disorderly," she said. "You need to have order, and I'm not going to put up with that."

Following the meeting, Craig said he wanted to make a few minor changes to the proposed facial recognition policy, adding that the board is scheduled to vote on the matter at next week's meeting.

"It's an emotional issue," he said. "We want to make sure people know we are not just going to be randomly scanning people's faces."

Detroit police have used the technology for a year, guided by standard operating procedures. The board last week was scheduled to vote on a policy governing use of the technology, but Bell said action was postponed to allow more research.

Craig last week told reporters many critics of the technology misunderstand how it will be used. He stressed: "We're not going to be randomly using this. The only time we use it is to identify individuals who are involved in violent crimes."

The chief said facial recognition technology is only used after-the-fact, when police have already identified a suspect on video. A still image of that suspect would be fed into the software and compared with police mugshots and pictures in the Michigan Secretary of State database, and on social media.

After a suspect is identified, the proposed policy requires police to use other evidence in conjunction with the facial recognition software.

"That by itself is not good enough," he said. "This is no different from a sketch, which police have used for years. It's a tool we use to get violent suspects off the streets. Is there a chance you may arrest the wrong person? Yes. But it won't be used as the sole evidence against someone.

"People are arrested based on sketches all the time," he said. "But if further investigation reveals that's not the suspect, they're released. That's the same with facial recognition."

Craig said both the existing standard operating procedures and the proposed policy have strict checks and balances to prevent misuse of the technology. He said the only time random scanning of faces would be allowed under the proposed policy would be if there's a "credible" threat of terrorism.

"In order to do that, it would have to go up the chain of command, and I would have to approve it," he said. "I'm talking about a credible threat; if someone just calls in and says they're going to shoot up the Thanksgiving parade, that by itself wouldn't be enough.

"But if there's a credible terror threat, I don't think there's a person in this city who would say they don't want us to find the perpetrator quickly," he said.

The chief also stressed that the facial recognition program is separate from Project Green Light, the program that employs high-definition cameras that are monitored in real time. Craig said the cameras used in the initiative don't have facial recognition software embedded in them.