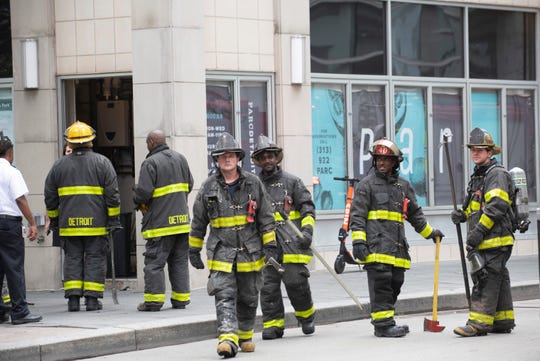 Detroit — A high-end restaurant in the heart of downtown caught fire Tuesday in Campus Martius.

Employees of Parc, the only restaurant inside Campus Martius Park, stood along Woodward Avenue as Detroit firefighters charged into the kitchen, where the incident began after 4 p.m. Flames could be seen stretching from the roof as downtown workers made their way home.

Zaid Elia, owner of the restaurant, said the fire began after a piece of wood from the wood-burning grill caught fire.

"A piece of wood from the wood-fire grill fell into the hood vent, releasing smoke into the kitchen," Elia told The Detroit News. "It doesn't look as bad as it did or seem to be from the outside." 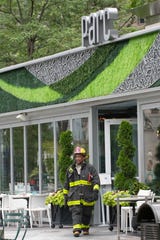 A Detroit fire fighter monitors the situation outside the evacuated Parc restaurant after a fire was extinguished at the Campus Martius Park eatery in downtown Detroit Tuesday afternoon, July 16, 2019. (Photo: John T. Greilick, The Detroit News)

Parc's signature dishes include Midwest flavors with influences of French and Mediterranean style that gives a "sweet, smoky aroma of our wood-fired Argentine grill," according to its website.

Elia said the restaurant had minimal damage and should reopen in a few days.

"Thankfully, they did what they could to contain it," he said. "Not nearly as bad as it looked."

The Detroit Fire Department had multiple trucks and ambulances on the scene that briefly shut down entrance into the downtown park.

Officers said they were able to extinguish the fire quickly, but the location of the restaurant made it a "high-profile" scene.

The scene caused passers-by to stop and watch.

Jasmine Williams, 19, said she was sitting near the Spirit of Detroit when she looked up and saw smoke.

"It looked like it happened really fast," she said. "I was just working on some homework when I saw smoke coming from Parc. I ran down to check it out because I have friends that work here."