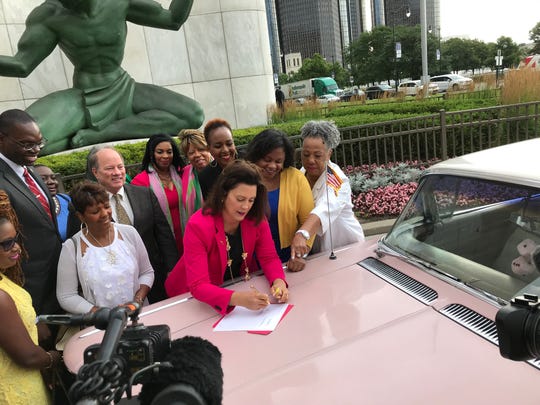 Using the hood of a 1958 pink Cadillac as a desk, Gov. Gretchen Whitmer signs the bill that designates part of the Lodge Freeway in Detroit as the Aretha L. Franklin Memorial Highway. (Photo: Charles E. Ramirez, The Detroit News)

Detroit — Gov. Gretchen Whitmer Monday officially designated part of the Lodge Freeway in honor of the late Queen of Soul.

The proclamation comes about two weeks after it was announced she would sign House Bill 4060, dedicating the stretch of the Lodge from Livernois south to Interstate 94 as the “Aretha L. Franklin Memorial Highway.”

Detroit Mayor Mike Duggan and other state and local officials joined Whitmer at a special 8 a.m. ceremony where she signed the bill. The event was held in front of the Spirit of Detroit statue at the Coleman A. Young Municipal Center in downtown Detroit.

"Aretha Franklin was a trailblazer," Whitmer said. "She taught generations of young women what R-E-S-P-E-C-T meant. So when people drive into Detroit, they will remember the profound impact that Aretha Franklin had.

"I am proud to sign this bill here today in the city that she loved and the city she called home, because there is no place like Detroit and there was no one like Aretha Franklin," the governor said.

A 1958 pink Cadillac was parked in front of the Spirit of Detroit, a real life reference to Franklin's hit song "Freeway of Love." Whitmer ended the ceremony by signing the bill on the hood of the Cadillac.

"Aretha Franklin touched this country in ways that went far beyond music," Duggan said. "Now with the renaming of the Aretha L. Franklin Memorial Highway, everyone who travels through Detroit on it will remember that Detroit is the home of the Queen of Soul."

Franklin, who who was born in Tennessee but lived most of her life in Detroit and got her start in her father’s New Bethel Baptist Church, died last year after a battle with pancreatic cancer.

The bill designating the section of the freeway in Franklin's honor was sponsored by state Rep. Leslie Love, D-Detroit, who introduced the measure in January. It cleared the House in a 101-6 vote in March. The Senate signed off 32-5 in June.

A handful of Republicans opposed the measure in each chamber, arguing highway designations should be reserved for military veterans and first responders.

"It's very important to me that the state of Michigan is honoring Ms. Franklin," Love said before Whitmer signed the bill. "When you get a memorial highway, that memorial highway is forever. I am honored and delighted to have sponsored this bill."

Love also pointed out that no taxpayer dollars were used in the designation of the freeway.

Sabrina Owens, Franklin's niece and personal representative of the Franklin estate, thanked the governor, Lt. Gov. Garlin Gilchrist, Love, Duggan and everyone involved in the effort for the honor.

"We know Aretha would have been profoundly proud and honored," she said. "I know I speak for the family when I say we are honored and humbled by your generosity and your thoughtfulness."