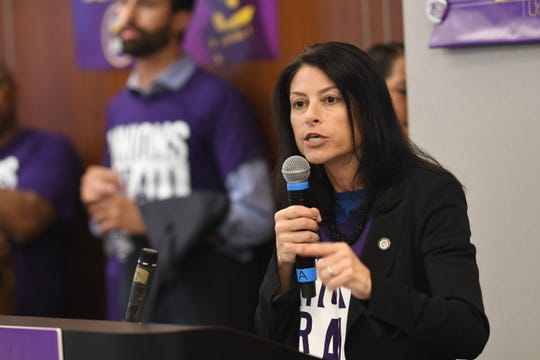 The workers representing SEIU Healthcare Michigan, the largest union of nursing home professionals in the state, are demanding an investigation of nursing home industry care standards. The local workers were joined by busloads of fellow union members from Minnesota, Kansas, Iowa, Missouri, Ohio, Illinois, Pennsylvania and Wisconsin, among other states.

“It is my privilege and honor to be here because these issues affect not only you but everyone who depends on the services you provide,” said Nessel, who announced the formation of an elder abuse task force in March. 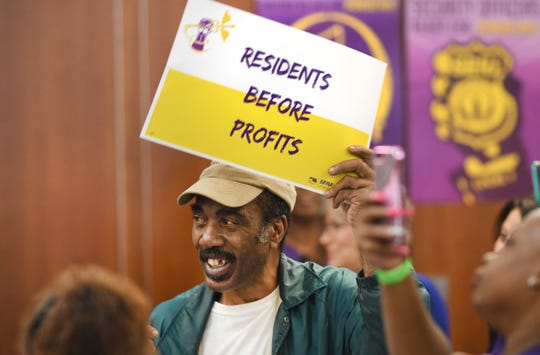 Before Nessel began, she walked around the podium and held her cell phone up with her back facing the crowd.

“I wanted to take a selfie of myself with the people that got me elected,” she said to the delight of the hundreds gathered at the SEIU offices on Jefferson Avenue in Detroit.

Nessel continued, “Few professions are as demanding as those in the nursing home industry. I want to extend my gratitude to the nursing home workers who stand ready to ensure the health and safety of our most vulnerable residents.”

Nessel said the major issue appears to be the patient-to-caregiver ratio.

“Many nursing home workers are responsible for between 15 and 30 patients at any given time,” she said. “This cannot stand.”

She said her office was “vigorously” going after nursing homes that don’t properly staff shifts.

“We’re all going to be seniors one day and will all need the kind of help you provide,” she said. “We need to help you because you’re doing the hard work to support the rest of us.

Andrea Acevedo, president of SEIU Healthcare Michigan, said the ratio of certified nursing assistants to patients is usually 1:8 during the day and 1:15 at night.

She then focused on what she called “poverty wages.”

“No one, and I mean no one, should be making less than $15 an hour for any work, especially those providing care for the most vulnerable population — our seniors.” 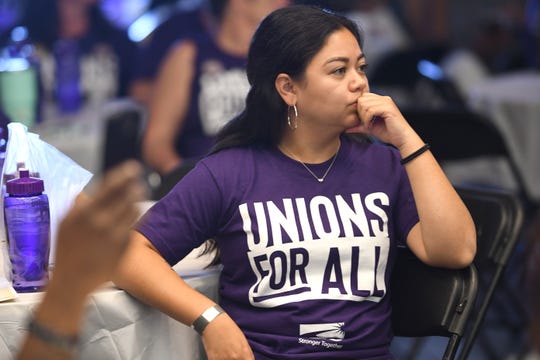 Nursing home worker Tamara Head of Detroit said she has been a certified nursing assistant since 1993 and can testify to the abysmal patient-to-caregiver ratio.

“Some nights, I have 23 people I’m responsible for,” she said. “Many times, we can’t adequately take care of five, much less 23.”

But she said, “It’s not about us. It’s about he seniors we take care of because they become our extended families.”

She said she does not work in nursing homes simply because those were the only jobs she could get.

“This is where my heart is,” she said. “This is the career God put on my heart. I don’t make a lot of money so I have to work two jobs.”

State Sen. Stephanie Chang, D-Detroit, was moved to tears as she thanked the workers for their courage.

“We need to raise wages and change and enforce staffing rates,” she said. “We are here in solidarity with you, and we will help you in making the change for the better, and together, we will get it done.”