What was once an abandoned oil shop and a junkyard on Detroit's west side, is now a place for community members to be active

Detroit — Growing up, Joseph de Verteuil and his family moved often, but at each new place, he would find the closest field and befriend people he could pass a soccer ball with.

Now living in Detroit, Verteuil decided to bootstrap his own field. And what was once an abandoned oil shop and a junkyard on Stranton and Merrick near Woodbridge, is Detroit Soccer District — a place for community members to be active. 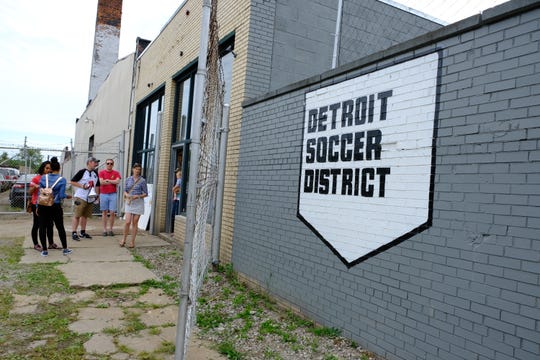 Detroit Soccer District celebrates their grand opening on Aug. 31, 2019, with a day-long tournament and block party on the city's west side. (Photo: Sarah Rahal, The Detroit News)

"I've been organizing soccer all of my life," said Verteuil, 27. "Always set up FIFA tournaments, club leagues, pick-ups. Attending college here, there weren't options to play whenever and I knew a group wouldn't do it and a company wouldn't create what I knew would be great."

Detroit Soccer District kicked off its grand opening with a block party and tournament Saturday, and debuted a 9,000-square-foot facility with an outdoor field for five-on-five soccer and indoor training center.

Six teams of five competed in a day-long tournament Saturday and were visited by Detroit Mayor Mike Duggan, who Verteuil said, is a soccer fan and congratulated them on the opening.

A group of about 50 watched from the bleachers, smiling as matches ensued. Verteuil, who helped referee the tournament, chuckled on the sidelines saying the risk of opening the facility was worth the reward. 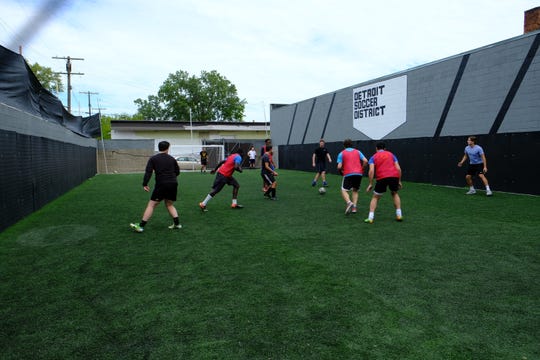 Teams compete in a tournament at Detroit Soccer District at their grand opening on Aug. 31, 2019. (Photo: Sarah Rahal, The Detroit News)

After receiving his undergraduate at Western Michigan University and his master's degree from Wayne State University, Verteuil went on to work in corporate finance. Last year, he decided he wanted more than to wake up every day to look at Excel spreadsheets. So he used his savings to replace what used to be a junkyard with his new facility on the city's west side.

"It was a crazy idea in June 2018 and I wanted somewhere I could play for myself," he said. "Turned out to be what others did, too. Then, a few months later, we got Motor City Match."

Verteuil's facility can serve up to 600 people. As a standard member, players can drop-in anytime while the center is open, join watch parties, utilize the gaming systems and host group training sessions for $30 a month. Drop-in is $5 for non-members. 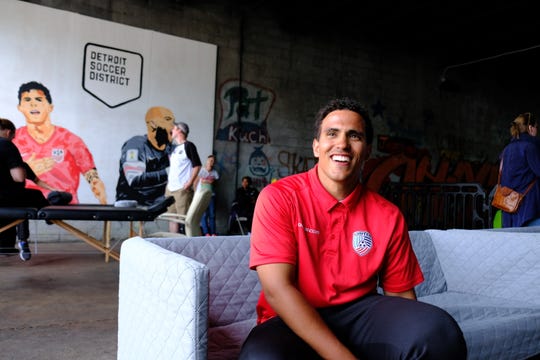 Joseph de Verteuil talks on the process of converting an oil shop and junkyard into a place for community members to be active. (Photo: Sarah Rahal, The Detroit News)

Renzo Miranda, 26, from Rochester Hills said he enjoyed the facility and hasn't seen anything else like it.

"I like it because it's competitive," said Miranda, whose team made the top four in the tournament. "I found it on Instagram and it's great for me to join pick-ups on Wednesday and Thursday's without committing to a league."

The smaller-scaled field also serves children as young as 4. The District has a partnership with Detroit Parks and Recreation to host a children's league in the spring for $20 per child including the uniform and shin guards.

The price point was designed for anyone to be able to afford, Verteuil said.

"Detroit PAL is near $65 and outside of Detroit it's at least $130 per kid," he said. "Anyone should be able to play especially in this universal sport that teaches teamwork."

The field is half the size of a regulated football field intended for futsal, requiring fewer players and the ability to use walls and abuse offsides.

"I like the micro aspect," Verteuil said. "Anybody that plays on our field, they will get at least two-to-three times more touches on the ball than on a full-sized field." 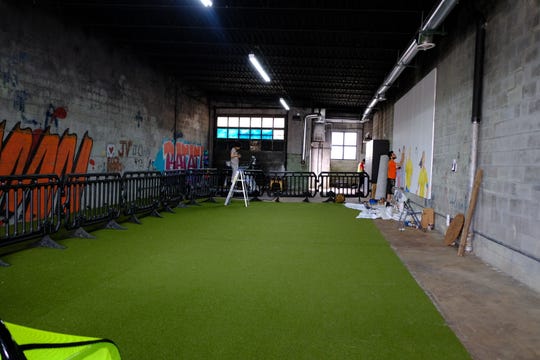 Nathan Swick from Detroit has played on soccer teams throughout his school career and joined the Detroit Soccer District on Saturday after finishing a summer recreational team on Belle Isle. He said the facility will be useful for the fall.

"It's not easy getting a team together and with everyone's busy schedules and inconsistent weather, this is a convenient place in a not-so-busy area," said Swick, 25. "It's easy and has good people."

At the opening, Verteuil is already hoping to expand, not this facility, but their mission.

"We'd love to expand to urban areas that don't have access to soccer and it's for urban areas only," he said. "The goal was always to serve the underserved by providing soccer and spread this great sport. We want to help make Detroit a soccer city."