The restoration is part of a $2.5 million project to renovate the church near Eastern Market, along a redeveloping Gratiot Avenue business district

Detroit — St. Joseph’s Oratory stands like a sentry at attention over Eastern Market and the busy intersection of Gratiot and the Interstate 75 Extension, where some long-vacant storefronts now house new businesses. 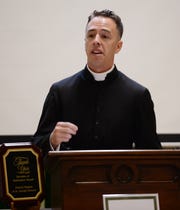 From 1873 to 1877, as the city began its pivotal transformation from a commercial center for the surrounding agriculture to a mighty manufacturing town, the steeple made St. Joseph’s the tallest building in the city, in a tie with old Detroit City Hall, which stood at Campus Martius.

A battle taken to the U.S. Supreme Court did not save old City Hall, an Italian Renaissance architectural gem, in 1961.

But on Monday, St. Joseph’s Oratory announced the completion of its meticulous $680,000 renovation of the 200-foot steeple, which replaced the original, of equal height, in 1892, 19 years after construction of the church.

St. Joseph’s was established by immigrants from Germany, where many Catholics opposed the new liberalism of political revolutions.

Many of the original Polish immigrants of Detroit first attended Mass at St. Joseph’s, before beginning to establish their own parishes less than a mile north, on the other side of the hay and wood market that was then Eastern Market. 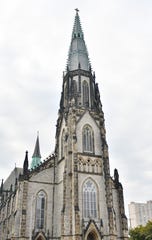 The oratory is now dedicated to the celebration of the Roman Catholic liturgy that preceded the Second Vatican Council (1962-65) in looser association with the Archdiocese of Detroit.

“Today marks the completion of the full restoration of our iconic 200-foot steeple and bell tower,” said Michael Stein, a member of the Institute of Christ the King and pastor of St. Joseph’s Oratory.

The 29-year-old institute was founded in Gabon.

“This is a historically accurate restoration, using original materials and design,” he said. “No corners were cut.

“I would like to thank our clergy and volunteers, all our donors and benefactors, contractors and tradesmen who made this day possible.” 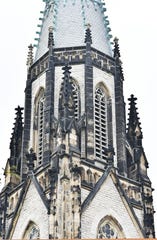 The project included the installation of new slate and copper, and refurbishing some of the existing elements. The wooden foundation of the steeple was entirely replaced.

The louvers and stone work of the bell tower were repaired.

The company has been working at the church since its founding.

The work is the first major project of the three-year, $2.5 million historic renewal campaign the church launched in October 2017.

“It is the most significant campaign since the completion of the church,” Stein said.

Other projects include a new parking lot and replacing the electrical system of the church. Both projects are “in process,” Stein said, and fully financed.

“We are currently seeking new campaign dollars to complete the church’s exterior stone work restoration, which entails all of the outside walls,” he said.

“This urgent work, which includes tuck-pointing and, in some areas, stone replacement, is crucial to ending water penetration and to preventing further stone displacement and damage.”

Fundraising will continue, including the annual Oktoberfest at St. Joseph’s, beginning with a reception at 5 p.m. Saturday, and activities, including a tribute to German music, beginning at 11 a.m. Sunday.

“This coming year, our fundraising effort will be the opportunity for parishioners, Detroiters and friends from afar to be united in restoring this historic edifice, quite literally stone by stone.”

He called the renewal “a tangible sign of the parish’s commitment to its faith, its congregation and it’s local community.

“We are witnessing on a daily basis the renewal and revitalization of our neighborhood and Detroit as a whole. This, we believe, is due in part to the daily presence and commitment of the church to our city and its dear people.

“Throughout history, our churches has always played a role as centers for culture and family life.

“And this is being realized here today.”