Detroit — Residents of a west-side neighborhood cheered Wednesday as city and police officials said they'd shuttered the Penthouse strip club for a year because strippers had solicited undercover cops for sex.

Police chief James Craig said at a press conference outside the club on Eight Mile near Evergreen that residents had complained to police about the facility since 2008.

"This has been going on for 11 years," Craig said. "We owe the community an apology — it took a while, but we got it done."

Attorney Cyril Hall, who represents the Penthouse Club, said he plans to appeal the closure with the Michigan Court of Appeals.

"The allegations they're making about the club are simply not true," Hall said. 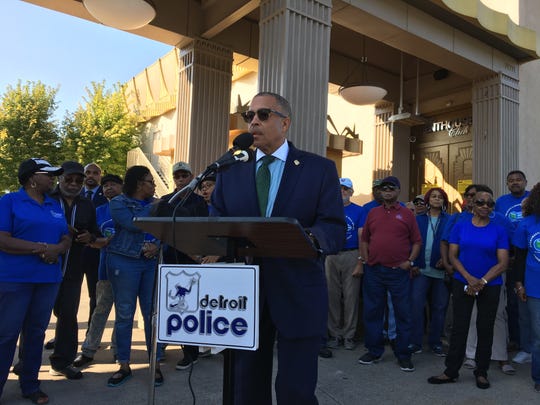 Doug Baker, chief of the Detroit Law Department's criminal division, said Detroit vice squad officers found numerous violations during inspections and while following up on complaints, including darkened areas of the club that are prohibited under state law.

Baker said the city entered into an agreement with Penthouse management "months ago," in which the city suspended the club for 90 days, during which the owners agreed to make renovations to ensure the entire facility was well-lit.

Elisabeth Mullins, also a Law Department attorney, added the Penthouse owners made the promised renovations, but added they ultimately didn't hold up their end of the deal.

"The club owners had erected curtains and dimmed the lights, which negated the renovations," Mullins said. "Undercover officers found used condoms in the club, which is evidence of sex activity.

"Even when vice officers were on the premises, dancers were trying to solicit undercover officers," Mullins said.

Hall, the attorney representing the Penthouse Club, said the allegations of prostitution are false.

"I deny there was any prostitution going on," Hall said. "There were allegations of solicitation, which is different from prostitution. No money ever changed hands, and no sex acts occurred. All we have is an officer who wrote in his report that he assumed there would be a sex act."

Hall said all Penthouse dancers are required to sign an employment agreement "that says they won't engage in any solicitation, let alone prostitution, and that they won't use drugs in the club."

Hall said the club met the city's demands to renovate the facility. "We complied, and there was an inspection," he said. "There was a little area where the service workers went, and a curtain was put up. When the city complained, we removed the curtain."

Craig added there was a single instance of drug use in the club.

Baker said the club was shuttered under state nuisance laws, following a ruling Tuesday by Chief Judge Timothy Kenny of Wayne County Circuit Court, who ordered the club closed for a year, and for all the fixtures to be sold.

Baker said the items would be auctioned off, and that the proceeds would go back into the city's coffers.

Dozens of residents of the Evergreen-Lahser 7-8 Mile Community Council group attended Wednesday's press conference, including Arlinda Hollister, who said she has protested the club for years.

"We've had to fight loud music, and people having sex in front of our houses, and throwing bottles in our lawns," she said. "It's been a headache."

Resident Dorothy Menefee, president of the neighborhood group, added: "Every morning we'd pick up condoms. Every night they were outside the club having sex. We're happy to see it closed down."

Craig said that kind of behavior isn't tolerated in other communities — "and it won't be tolerated here," he said.

Hall called the allegations that the club has been a community nuisance "absolutely untrue."

"During discovery, we asked if there were any claims by citizens that anything afoul was going on, and the city had zero information," Hall said. "They didn't present one shred of evidence about citizen complaints. No shootings, no property thefts — zero."

Craig said shortly after he became Detroit chief in 2013, a group of strip club owners asked to meet with him. He said he accommodated them, and that they asked him to stop enforcing prostitution violations inside strip clubs.

"They said, 'we think it's unfair you cite us and they close us down because we're doing prostitution.' I was astounded," Craig said. "They said, 'Chief, what are we supposed to do? We're businessmen. Establishments outside Detroit are allowed to do prostitution.'

"I said, 'I'm only interested in one place: Detroit,'" Craig said, prompting applause from the gathered residents.

Craig said police gave Penthouse management "warning after warning ... we showed tremendous patience, and we were ignored," he said.

"This should serve as a warning to other strip club owners in Detroit: If you engage, we will engage," Craig said. "This is not an affront to the other owners of adult establishments. If you do things legally, we have no problem with you."