Victim, 47, was crossing street when he was struck by a sedan that failed to stop, officials said

Detroit — Police are asking the public to help identify a person of interest in a fatal hit-and-run that happened last Friday on Detroit's east side.

Investigators released photos of the person wanted for questioning. 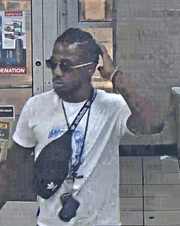 Detroit police are looking for this person of interest in connection with a fatal Sept. 13, 2019, hit and run on East Warren Avenue. (Photo: Detroit Police Department)

A 47-year-old man was crossing the street in the 12800 block of East Warren at about 9:24 p.m. when he was struck by a tan or light-colored late model sedan, according to authorities.

The driver of the vehicle then continued traveling east on Warren.

Police and paramedics were called to the scene, officials said. The victim was pronounced dead.

Anyone who recognizes the person of interest or the suspect's vehicle should call the Detroit Police Department's Fatal Squad Unit at (313) 596-2260 or Crime Stoppers of Michigan at 1 (800) SPEAK-UP.