Detroit — It took a Detroit-based non-profit less than six months and $13,000 to transform a corner of a neighborhood from blighted overgrowth to its new life as a park.

Daniel A. Washington, 26, is a proud son of Detroit's Northwest Goldberg neighborhood, now home to 6102.ART PARK, on the corner of Marquette and 16th. Despite the neighborhood's name, its geography is bounded roughly by West Grand Boulevard, the John C. Lodge Freeway, Interstate 94 and Interstate 96. 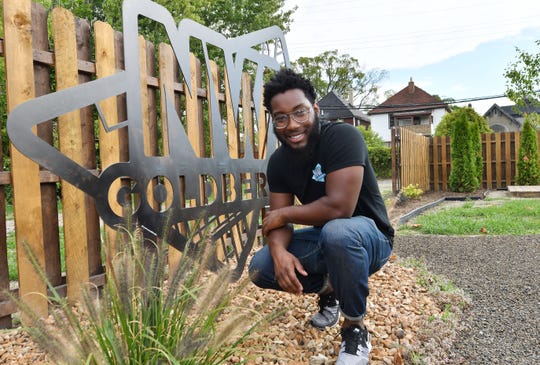 A year ago, that corner of 16th and Marquette — kitty-corner from Detroit Police Department's training facility — was an eyesore.

But this spring, NW Goldberg Cares, the non-profit Washington created in 2017, acquired the side lot from the Detroit Land Bank Authority. Since then, the small field has been cleared of tree stumps and shrubbery. A walkway made of rubber mulch leads to a steel emblem bearing the neighborhood's name. A small riser, to the east, could someday be a stage for reading or performances.

The park might be several steps up from what it replaced, but Washington says its full potential hasn't yet been realized. He sees three upgrades that are needed: benches that allow visitors to sit, shade that makes sunny days more bearable and garbage cans. 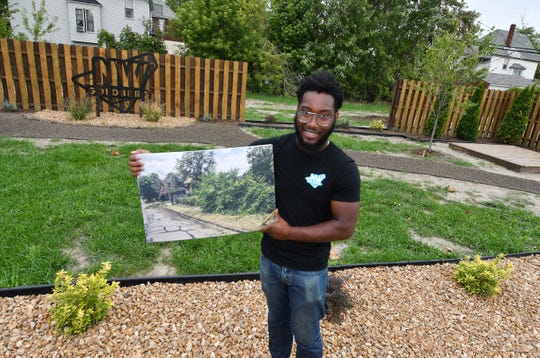 Daniel A. Washington holds a before photo of the area, and now stands in the new created park. (Photo: Clarence Tabb Jr., The Detroit News)

The park's creation, and the corner's transformation, were celebrated last week at a grand opening attended by Mayor Mike Duggan.

The city of Detroit wasn't just a cheerleader that showed up when the heavy lifting was done, affiliates of the non-profit explained in a site visit Sunday. It did some of the lifting itself.

The land bank sold the side lot to the non-profit for $100. Only problem: a neighboring lot still had the foundation of a former home intact, but dilapidated, posing a safety risk at a space meant to be welcoming to children. The city made its owners tear down the foundation.

"Hopefully one day we can acquire that and expand to that part," Washington said. An investor owns it now. "This is half of the design, and the other half can match it."

"The police have been a great partner," Washington said. "This corner made a lot of sense because this side of the neighborhood is densely populated. We wanted to create a safe space that residents wouldn't have a hard time getting to. Why not put it where the residents are?"

The question isn't whether gentrification is coming to Northwest Goldberg — "it's here," Washington said. The question is how the voices and views of area residents can be reflected in any new development. 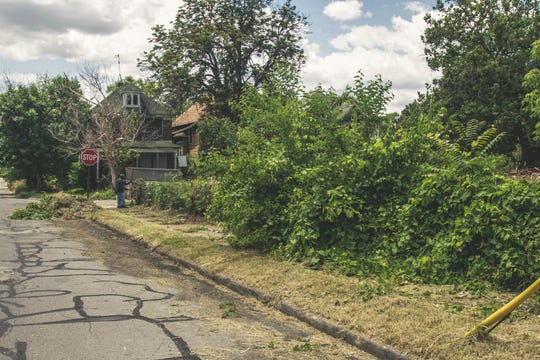 Before it became an art park, the lot at 6102 16th St, on the corner of Marquette and 16th St in the NW Goldberg neighborhood, was an overgrown and abandoned space. (Photo: NW Goldberg Cares)

Washington, founder and executive of the non-profit, met executive director Jordan Yagiela, 25, when they both worked for the Detroit Regional Chamber, she said. The more they talked, the more they found they shared an interest in a hands-on role in Detroit's revitalization.

When Yagiela was considering where to buy a home, Washington's influence helped get Northwest Goldberg on her radar. Today she owns two homes there, both across the street from the new park. One she'll call home, the other she'll rent out. Both will need work before they can be occupied.

"I've always wanted to live in the city of Detroit," said Yagiela, who grew up in Farmington Hills and was a renter in Royal Oak when she bought the homes. "I decided I wanted to purchase something, and decided to go the land bank route. I learned after renting for a year that I didn't like it. It was wasting money."

But home renovations are a laborious process — just like creating an art park. Hours of daily work are required, whether or not those hours actually exist in one's schedule.

Yagiela says she gets "mixed reactions" when people learn she's bought a home in Detroit. Some people think she's "crazy" after buying a "$1,000 home." Others don't know what Northwest Goldberg is, until she mentions its most famous landmark, the Motown Museum.

In "phase two" of the park, Washington said, the plan is to get electricity and a water source for the park. Right now it's irrigated using water from Washington's parents' home.

The transformation effort began in June and wrapped on Sept. 12, said Yagiela.

The total cost of the transformation, not including volunteer hours given freely by police cadets, neighborhood members and leadership of the non-profit, only comes out to $13,000, Washington said.

"Without the help of organizations that donated materials, or items, that's closer to $50,000," Washington said.

NW Goldberg Cares is also in the midst of creating a community garden on 15th Street. It will be called 6134.HOLLAND MAZE PARK, and will open in spring 2020, Washington said. 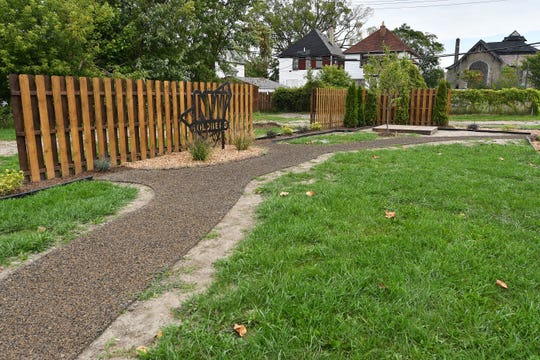 The park opened earlier this week in a northwest Goldberg neighborhood lot that used to be abandoned and overgrown. (Photo: Clarence Tabb Jr., The Detroit News)

The goal for the park and the garden, Washington said at the time the park was announced, are the same: Improve the quality of life for current residents, so much so that the neighborhood can attract new ones.

Included in the garden is a mini-library and the space for bees from Detroit Hives. Sometime during the week, when it's up and running, there will be storytime activities for neighborhood children.

"What can we do to activate this?" Washington said in the spring, when the garden received grant funding. "What can we do to make people say, 'Hey, I want to be part of Northwest Goldberg, they’re doing something unique'? We’re not just waiting for a developer to come."