As the vehicle was approaching Kercheval Avenue, it hit another vehicle, continued through the crash and struck a house

Detroit — Police are investigating whether some people in a car involved in a fatal crash into a house Tuesday in Detroit were involved in as many as 29 recent "smash and grab" robberies at area businesses.

Many of the occupants also have been connected to a street gang, investigators said.

"The M.O. from all of the incidents matches. Different vehicle descriptions throughout the series of smash and grabs," said Assistant Police Chief David LeValley during a press conference Wednesday.

"So whether they are part and parcel of a larger group, or responsible for all 29 themselves, we’re not certain at this point. I'm sure we’ll get there as we look at each of the cases."

Before the crash, officers had sought the car since it matched the description of one driven by suspects accused of stealing merchandise earlier Tuesday at a Foot Locker near Eight Mile, LeValley told reporters.

The male driver and a female passenger died from their injuries, police Chief James Craig said Wednesday. Three other males remain hospitalized. All five were believed to be 18-20 years old, he said.

When officers spotted the car they were in at about 2:15 p.m. Tuesday,officers activated their lights and the vehicle took off on Chalmers Street at a high rate of speed, police said. 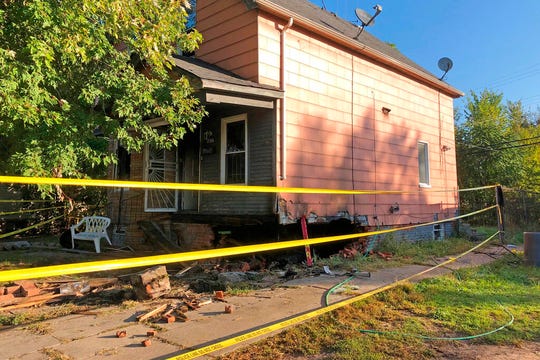 In this Sept. 9, 2019 photo, damage to a home can be seen after a car crashed into it in Detroit. Two people died after their car crashed into the house while the vehicle was being pursued by police. The car burst into flames Tuesday, Sept. 8 and blew a huge hole in the foundation of the house. Police say three other people in the car were in critical condition. (Photo: Ed White, AP)

As the vehicle was approaching Kercheval Avenue, it hit another vehicle then struck a house, police reported.

The occupant of the vehicle that was struck was treated for non-life threatening injuries. It's unclear if anyone was inside the home at the time, police said.

The suspect's car was carrying five people  and caught on fire after striking the home. Emergency crews attempted to use fire extinguishers as they pulled the victims out of the car.

Craig said police are working to determine if the woman who died was associated with a street gang like others in the car.

"We know based on intelligence that these individuals were involved in a local street gang" that operated primarily operated on the city's east side, the chief said.

The driver was identified as a young man who had participated in a police youth mentoring program, Craig said. "Unfortunately he continued to engage in, what we believe, this kind of criminal behavior. ...We just couldn’t pull him totally away from what he was involved in."