After 42 years, juvenile lifer gets first taste of freedom

After 42 years, juvenile lifer gets first taste of freedom

When Charles Lewis was sent to prison for the killing of a police officer, Jimmy Carter was president, Coleman Young was mayor of Detroit and McDonald's hamburgers came in Styrofoam containers.

Accompanied by his sister, Lewis, 60, stopped at the home of the Golden Arches Friday after being released from a sentence of life without parole, expressing astonishment at the changes in the outside world since he started serving time.

At the Royal Oak restaurant, Lewis ordered a Quarter Pounder, fries and a Coke, waiting in line not with impatience but the intoxicating joy of being free. 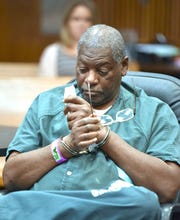 Charles Lewis wipes his eyes as Wayne County Circuit Court Judge Qiana Lillard orders that his life sentence be dropped and he be resentenced to 37 to 60 years in prison, making the juvenile lifer immediately eligible for parole. (Photo: Todd McInturf, The Detroit News)

"I've been out here a couple of hours and it's unreal," Lewis said during an interview at his attorney's office in Detroit. "We went to McDonald's and that was an experience 'cause I haven't been in a McDonald's in 40 years ."

Lewis' smiles Friday were a vast difference from his expressionless face Thursday, when Judge Qiana Lillard reduced his sentence in Wayne County Circuit Court, essentially giving him his freedom. 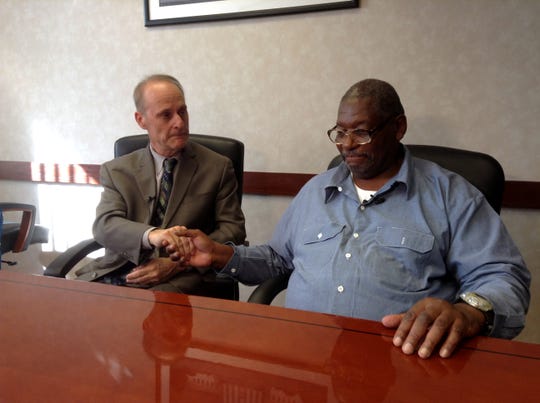 He was convicted at age 17 and sent to prison in 1977 for the armed robbery and fatal shooting of off-duty Detroit Police Officer Gerald Sypitkowski outside an east side Detroit bar.

Lewis, who maintained again that he did not shoot Sypitkowski, said he's still trying to take in the feeling of being free after walking out of the Macomb Correctional Facility Friday morning.

"It's overwhelming," he told reporters. "To go from last night — I was in a hole   sleeping in a cell with nothing in it but a mattress and a blanket and a sheet — and to go from that to standing in the line at McDonald's is like mind-blowing."

Lewis said he's trying to enjoy being out of prison while thinking about where his life will take him next.

Lewis said he wants to work, saying, "I have a work ethic out of this world."

The former Detroit resident said he plans to leave the city next week and join his mother in Georgia, where he wants to settle and seek opportunities playing bass and lead guitar as well as the piano. He hopes to join a blues, jazz or gospel group to continue to practice his music skills.

Also among Lewis' top goals is helping other inmates serving life sentences for offenses they committed as teenagers.

"I have to think of the juvenile lifers I left behind, so I have to be a shining example so that they will have a shot at getting out as well," said Lewis. "Every decision that I make has to well-thought out, and I know there's a spotlight on me, so I can't afford to fail. Failure is not an option. If I fail, I'm letting down those who are coming behind me, and I can't ... afford to do that."

Lillard resentenced Lewis to 37-60 years. With credits for time he spent in jail awaiting trial and good behavior, he was immediately eligible for release.

Since the U.S. Supreme Court found in 2012 that automatic life sentences without parole for juveniles constitute cruel and unusual punishment, defendants who committed crimes when they were youngsters are getting an opportunity to be resentenced.

Lewis said he thinks the family of the slain off-duty officer was done a "grave disservice" and that he doesn't think they showed up for his resentencing hearing  because "I don't think they thought that I was guilty."