The pair entered the store at 9911 E. Jefferson about 8 p.m. Oct. 8 and robbed the manager

A $1,000 reward was announced Monday for tips to find two people wanted in a recent robbery at a Family Dollar store on Detroit's east side. 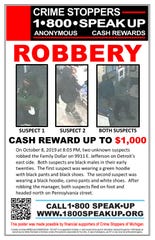 The reward was announced Monday. (Photo: Crime Stoppers of Michigan)

The pair entered the store at 9911 E. Jefferson about 8 p.m. Oct. 8 and robbed the manager, Crime Stoppers of Michigan said in a statement.

One of the men was armed and the other posed as a lookout, Detroit Police Detective Carmela Walker said. They had planned to steal from the cash register, but when the worker couldn't open it, the men took his wallet, cellphone and keys, she said.

The suspects, both described as in their early 20s, fled the scene on foot north on Pennsylvania.